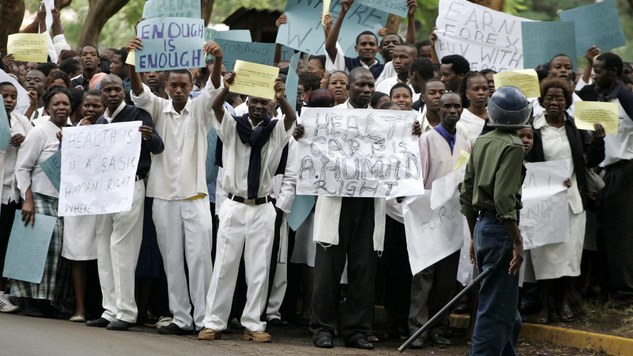 AT LEAST 62% of Zimbabwe workers are earning measly salaries, taking about US$60 per month as of April, a latest Zimbabwe National Statistics Agency (ZimStat) 2022 second quarter labour force survey has revealed.

Results show that 62% of the employed population earned income of less than $20 000 in April which was equivalent to US$120 at the interbank rate and US$60 at the black market rate.

In July, the Consumer Council of Zimbabwe (CCZ) said it was failing to calculate the family food basket due to regular price increases of basic goods and services.

According to ZimStat, the working age population was estimated at 9 million, about 59% of the total population.

Around 3.3 million of the working age population were currently employed.

The national employment to population ratio stood at 35%.

“Sixty-two percent of the employed population earned an income of less than $20,000 during the month of April 2022,” the report reads.

“Among the paid employees, 27% earned income of less than $20 000 again during the month of April 2022. Thirty-eighty percent of the employed population worked excessive hours of above 49 hours a week. Twenty-nine percent were in time-related underemployment.”

The Zimstat results show that 88% of the employed population were informally employed.

“Twenty-nine percent of the employed population was in the formal sector while forty-five percent were in the informal sector,” Zimstat said.

“Of those in employment, 21 % and 5% were in the agriculture and household sectors, respectively. Eighty-eight percent of the employed population were informally employed.

“Among those employed in the non-agriculture sectors, 85% were informally employed. The wholesale trade, retail trade and repair of motor vehicles and motorcycles industry had the largest proportion of the employed population at 26 % followed by agriculture, forestry and fishing with 21%.”

Workers representatives said working conditions have worsened in the past two years as the economy slides.

ZCTU secretary general Japhet Moyo said: “It is very unfortunate that workers are underpaid. The salaries are way below the poverty datum line. Workers’ rights have been heavily violated.”

On Friday, Zimbabwe joined the rest of the world to commemorate the International day of Decent Work. This year’s commemorations were held under the theme: Decent work, the foundation of social justice.

“We are holding commemorations when a number of workers are underpaid. There are health and safety issues as well as limited job opportunities. These issues form decent work pillars which are largely ignored by employers both in the public and private sector,” Moyo added.