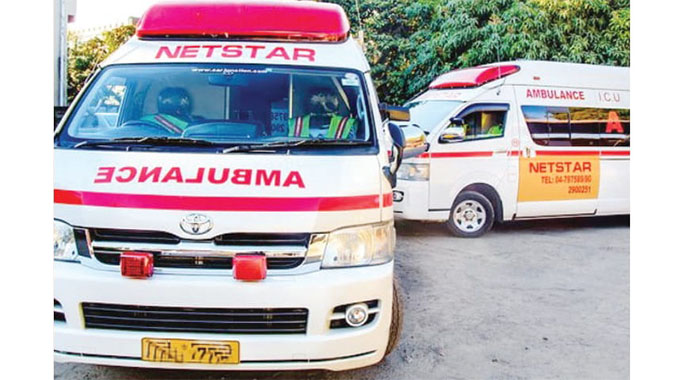 THE High Court has ordered Netstar Ambulance Services (NAS) to compensate a Bulawayo man more than $400 000 after he fell off a stretcher bed and got injured while being taken out of the company’s ambulance upon arrival at a hospital.

Mr Edward Stanley sustained a femoral fracture after the stretcher bed collapsed while he was being taken to the United Bulawayo Hospitals (UBH).

The ruling by Justice Christopher Dube-Banda follows summons filed by Mr Stanley at the Bulawayo High Court, citing NAS and its two employees, Mr Humphrey Mwamsbi and Ms Charmaine Sibanda, who were both part of the ambulance crew, as defendants.

Justice Dube-Banda said NAS is liable and should pay the money as its two workers were performing their duties at the time of the incident.

The judge said since there are no scales existing by which pain and suffering can be measured, the quantum of compensation can only be determined by the broadest general considerations, which include the fall in value of local currency.

“Awards must reflect the state of the economic development and current economic conditions of the country. General damages are awarded to compensate plaintiff for direct effects of the damage to the injured party or for loss,” he said.

“The objective of general damages is to enable the plaintiff to overcome the effects of the injuries, compensate him and not to penalise the defendant.”

Justice Dube-Banda said although he has no difficulties in rejecting the claim for loss of amenities, awarding Mr Stanley for damages for pain and suffering and loss of amenities would amount to double compensation.

Mr Stanley said on November 27, 2019, he enlisted the services of Netstar Ambulance Services, which offers ambulance services, to ferry him from his house to UBH.

The ambulance company sent its crew consisting of Mr Mwamsbi and Ms Sibanda who upon arrival put Mr Stanley on a stretcher bed and transported him to the hospital.

“Upon arrival at the hospital, first and second defendants (Mr Mwamsbi and Ms Sibanda) took me out of the ambulance in a stretcher, which collapsed resulting in my fracturing the femur,” said Mr Stanley.

He said he had to undergo an operation and had metal plates inserted inside his leg to support his bones.
Mr Stanley said the defendants were negligent, arguing they failed to exercise due care and attention when they took him out of the ambulance on the stretcher bed.

Mr Stanley also wanted the defendants to pay him US$3 250, R650 and 900 pula being additional special damages, but the judge rejected the claim, saying there was no justification.

The defendants did not respond to the application. Mr Stanley was represented by Moyo and Nyoni Legal Practitioners.-Chronicle