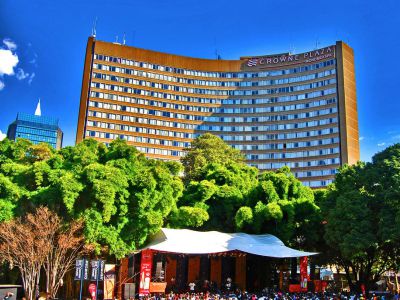 An unidentified man died early this morning after apparently falling from a room at Crowne Plaza Monomatapa hotel in central Harare.

Witnesses said the middle-aged Caucasian man, believed to have been a guest at the hotel, died instantly on impact with the ground.

Hotel management declined to comment on the bizarre incident which police are now investigating.

It could not be immediately established from which floor the man fell.

A huge crowd gathered at the scene as police removed the body after paramedics pronounced the man dead.

“I heard a loud thud and was shocked to find out that it was a man who had fallen from a hotel room.

“I initially thought it was an electrical explosion,” said a vendor who plies his trade near the hotel.

The circumstances leading to the incident are still unclear as police investigations continue.-Herald