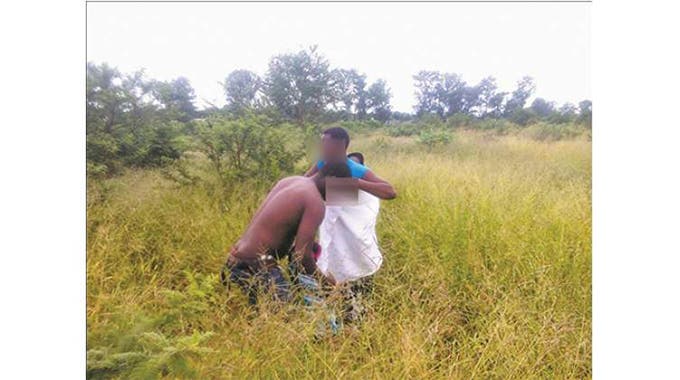 A sex romp in the bush ended badly for a married man after he was allegedly bitten by a poisonous snake.

Edmore Marongwe from Gwarimba Village under Chief Chingoma in Mberengwa survived death by a whisker after he was allegedly bitten by a snake during an adulterous romp with his married girlfriend Chiedza Mazvimbakupa.

According to impeccable sources, on the fateful day the two lovebirds, Marongwe and Mazvimbakupa are alleged to have sneaked out of their homes and met in the bush for an afternoon sex romp.

However, things reportedly took a sinister turn when Marongwe was bitten on the leg by an unknown poisonous snake which was apparently sheltering under their improvised makeshift mat made of tree branches and leaves.

After the attack, Mazvimbakupa in panic mode is alleged to have fled the scene, attracting the attention of passersby’s who quickly rushed to the scene where they found Marongwe, who was dressed only in underwear, writhing in agony.

Mazvimbakupa confessed to the passerby that Marongwe was bitten by the snake while they were having sex.

B-Metro reports that, in a bid to reduce the effect of the snake venom, the passersby reportedly administered some herbs on Marongwe.

Upon realizing that their secret love affair was now out in the open, Mazvimbakupa begged the passerby’s not to tell her husband about the affair.

“She begged them not to report her to her husband. She knelt down and begged the passersby to not tell anybody. She said she did not know what had gotten into her.

“One of the passersby who seemed to have been related to Mazvimbakupa’s husband, however, refused to buy the apology,”said a source who declined to be named.

Three used condoms were reportedly discovered close to the love nest and it also later emerged that before they were caught in the act, the two lovebirds were always taking to the bush to satisfy their sexual urge.

Meanwhile, after receiving news that his wife was in the habit of dishing out sex to Marongwe, Mazvimbakupa’s husband reportedly approached Chief Chingoma demanding six head of cattle as compensation.

Tory plan to deport Zimbabweans could be a ‘death sentence’