Manchester City extends EPL lead with away win at Brentford 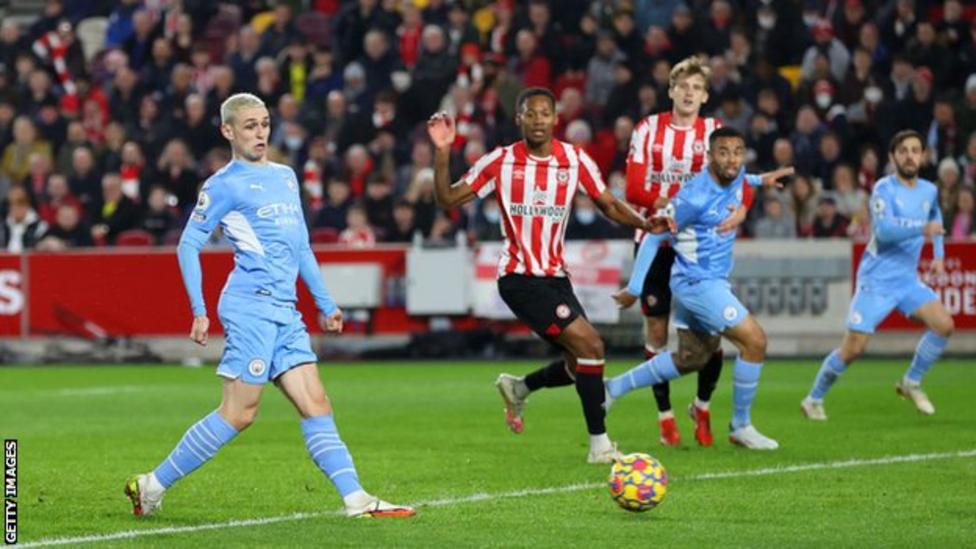 Manchester City manager Pep Guardiola says the Premier League title race is far from over despite seeing his side end 2021 eight points clear at the top of the table after victory over Brentford.

With Chelsea being held to a 1-1 draw by Brighton earlier on Wednesday and Liverpool losing 1-0 to Leicester the day before, City capitalised by seeing off a spirited Bees side.

Phil Foden settled the encounter with his fifth league goal of the season early in the first half, superbly finishing first time from Kevin de Bruyne’s whipped ball.

The win was City’s 10th in a row and leaves them in a commanding position at the top. The previous two occasions City rounded off December in first place in the Premier League – in 2011-12 and 2017-18 – they went on to win the title.

“There are 54 points to play for,” Guardiola said.

“All of you, thank you for your nice words because we win but I am not going to believe any words you say about it is already done or expected because Chelsea and Liverpool are more than exceptional. One is champions of Europe and the other has been our big rivals over the years.

“The distance is not because they drop points but because we win 10 games in a row.”

Top three in the Premier League
City were looking to equal the club’s top-flight record of scoring at least four goals in four successive games set in 1905 but they rarely carved open a hard-working Bees side.

Ivan Toney was fortunate to go unpunished for catching Fernandinho with his studs as the City midfielder lay on the ground shortly before half-time.

The visitors went close to doubling their lead soon after the break when De Bruyne and Foden again linked up, with the latter heading his team-mate’s cross just wide of the post.

De Bruyne struck the base of the upright with a fierce low drive from distance, while Dias had a header ruled out for a marginal offside, but in the end Foden’s first-half strike was enough to seal the win.

Brentford, meanwhile, remain 14th with 20 points – nine clear of the relegation zone as they look to ensure a second season in the top flight.

Indeed, the decisive strike had come just moments after the hosts came close to scoring themselves but Ederson reacted well to keep out a cross that bounced towards the City goal off Ruben Dias, before Yoane Wissa’s deflected strike was cleared off the line.

Brentford 0-1 Man City: Pep Guardiola praises ‘perfect performance’
What looked like being a three-horse title race at the start of the December now has City firmly out in front after an incredible run of form while their rivals faltered.

City have won every Premier League game they have played in December, scoring 24 goals in the process and conceding just five.

But while their previous three victories involved them scoring seven, four and six goals, this was a narrow but hard-fought win that arguably only serves to strengthen their credentials as favourites for the 2021-22 title.

Being able to grind out results is just as important as recording big wins and they managed to come out on top against a physical Brentford side who provided a stern test for Guardiola’s team.

The only glimmer of hope for City’s title rivals is that they did not look at their fluid best, particularly in the second half, but ultimately they had done enough to secure the points as Brentford rarely looked like threatening an equaliser.

The Bees certainly deserve credit for limiting a previously rampant City to just the solitary goal and despite the defeat it was a battling performance that suggests they have a good chance of preserving their Premier League status for another season.

Brentford 0-1 Man City: Thomas Frank proud of ‘impressive’ Bees
Too soon to write off rivals or is title race over?
Only five times before has there been a gap of at least eight points at the top of the Premier League table at the end of a year and on each of those occasions the leader has gone on to win the title.

The team at the top heading into January has also gone on to win the title in eight of the last 12 seasons.

“Liverpool have been on extraordinary runs but the standard City are setting is phenomenal.”

Former Manchester City defender Nedum Onuoha added: “It’s not game over, but it’s pretty significant. City would need to have a mini calamity between now and the end of the season.

“Four or five weeks ago, it felt like Chelsea were on top, but all of a sudden Chelsea and Liverpool have had a little bit of a dip and City are looking pretty good.”

Former Newcastle striker Alan Shearer believes if City win their next two games – away to Arsenal on Saturday and at home to Chelsea on 15 January – then the title race will be over.

“The impressive thing is the number of goals they are scoring,” he said on Amazon Prime.

“But other than [the 6-3 win over] Leicester on Boxing Day, they are hardly conceding too, which is going to make it really difficult for Chelsea and Liverpool to get back into the race, particularly if you look at City’s next two games then [if they win] it is pretty much over.”

Tinashe Kachingwe can see the future, and she’s bringing us with her