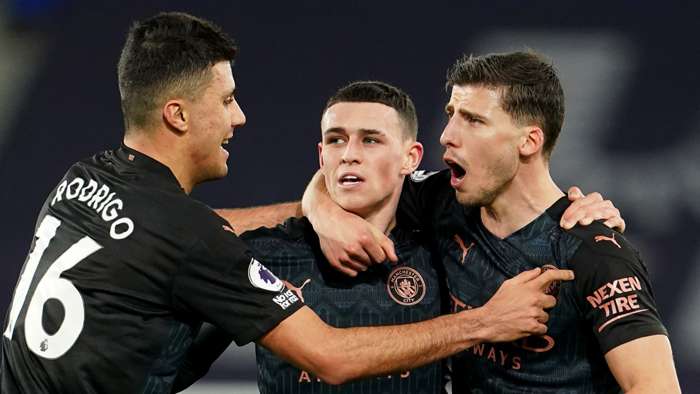 Pep Guardiola’s side have won every top-flight match they’ve played in 2021, setting a new mark in the process

Manchester City set a new Premier League record on Wednesday, as their 3-1 victory at Everton saw them reach 10 straight wins to begin 2021.

No Premier League team had ever reached that mark to begin a calendar year, with City reaching yet another milestone as they threaten to run away with the league title.

Pep Guardiola’s side have now won a remarkable 17 straight games in all competitions, last failing to win in a 1-1 draw against West Brom on December 15, and last losing on November 21 against Tottenham.

Since that loss to Spurs, City haven’t trailed for a single minute in any of their last 16 Premier League games. Guardiola’s side are approaching Arsenal’s record of 19 straight games, which was set in 1999.

City have now opened up a 10-point lead atop the Premier League. Only Newcastle United in 1995-96 and Manchester United in 1997-98 have failed to win the title after building a double-digit lead in the league.

What did Guardiola say?

Speaking to BBC Sport after the game, the Man City boss admitted it’s difficult for City to maintain the run they’re on with a growing target on their back. https://imasdk.googleapis.com/js/core/bridge3.442.0_en.html#goog_1228708426This video will start in0:36Article continues below

“When you win a lot of games everyone wants to beat you and it is tricky,” Guardiola said. “I have not seen that the team is thinking of the table, we have spoken about that. We are not here to defend our lead, it is all about three points, three points.

“There are 42 points still to fight for, we are in the middle of February. Now we rest for a few days, there are so many games.”

What’s next for City?

Guardiola’s side will face Arsenal in the Premier League on Sunday before they take on Borussia Monchengladbach in the Champions League last-16 first leg on Wednesday.