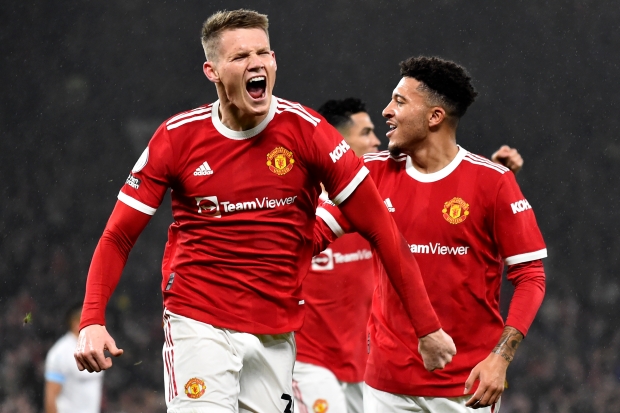 Interim boss Ralf Rangnick explained how a formation switch and six changes to the team which drew at Newcastle inspired an improved performance from Manchester United in their win over Burnley, which moves them up to sixth in the Premier League table.

Ralf Rangnick described Manchester United’s attacking play in the first half against Burnley as the best of his reign so far and explained the tactical and personnel changes he made to make it happen.

United stormed into a 3-0 lead against Burnley inside 35 minutes on Thursday night and although Aaron Lennon pulled one back for the visitors, United are now four points off fourth-placed Arsenal with a game in hand.

Interim boss Rangnick put that electric first-half display down to the six changes he made to his line-up after the disappointing draw to Newcastle on Monday and a move away from the 4-2-2-2 formation he has previously used.

“Was the first half the best since came to club? I would say offensively yes. Whenever we had the ball in their half we did the things we intended to do, finding the right spots and spaces, taking on players in one on one situations,” he said.

“After the first goal, we scored we had control but then we gave away one goal. Whenever the ball was in our half there is still space for improvement but offensively that was so far the best performance.

“It was about fresh legs, fresh energy, fresh bodies, more physicality against this team. We knew how difficult they would be, how persistent they would play and it was a little bit of a war of attrition, a little bit of a difficult one to play. Therefore, it was important to me to have six fresh players on the pitch compared to the game at Newcastle.

“We had Nemanja [Matic] in the team as a sort of quarter-back player who can also calm the game down and play the passes from that position. Scotty [McTominay], again, his energy on the pitch is contagious in a positive way. That was an extremely good performance by Scotty today.”

Rangnick also revealed he and his coaching staff had only taken the decision to select man of the match and goal scorer McTominay on Thursday afternoon because of an injury the Scot was carrying from Monday night.

“We only decided at 2pm this afternoon that he would play as he still had some problems with his ankle that he suffered at Newcastle,” said Rangnick. “It was good to have him available in the team.

“At half-time, our team doctor told me he’d be struggling in the second half with the level of pain so it was important to have him in the team and in the end he could play the whole 92, 93 minutes.

“He was a very important player for us today. We played in a 4-4-2 defensively and a 4-2-4 offensively and therefore it was important to have him and Nemanja as the two sixes playing next to each other.”

In a post-match interview with Amazon, McTominay said Rangnick had laid down the law to the United players about their poor body language against Newcastle. Sky Sports’ Gary Neville had called them “whingebags”.

Rangnick’s intervention had the desired effect – and the interim boss explained why it matters so much.

“In team sports, it’s always important that you’re convinced about what you’re doing,” he said. “At Newcastle, it was a difficult game for us, we were 1-0 down after seven minutes, and they did well.

“We didn’t play well, especially in the first half at Newcastle and the reaction to what’s happening on the pitch is the question. Do we fight back? Do we show them we’re still a team and we believe in ourselves? Or do we shake heads?

“These kind of things only help the other team and do damage to our own team. For me it was clear to tell them, ‘listen, we behave and work as a team and don’t show these kind of side effects on the pitch’.”-Skysports