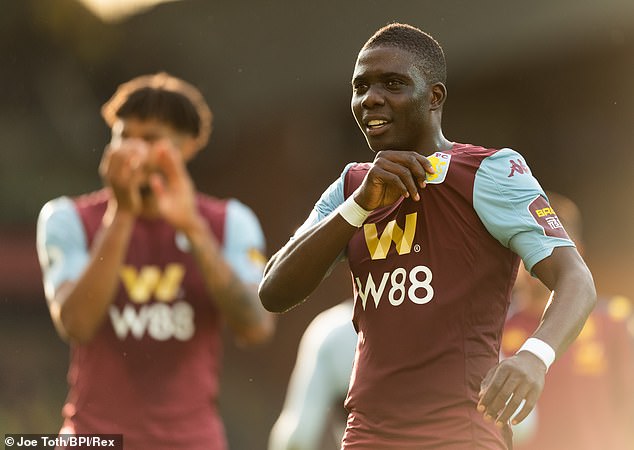 IT’S something that will not make headlines but Marvelous Nakamba finished among the Top Five ball-winning midfielders in the English Premiership last season.

Only Declan Rice, Phillip Billing, N’Golo Kante and Wilfred Ndidi did better than the Zimbabwean among the players who played, at least, 1 500 minutes.

That’s according to defensive data collected by the authoritative sources at Breaking The Lines.

So, in simple terms, Nakamba, for a player in his first season in the Premiership, played very well.

His role is to win the ball and play it out — not gain the headlines.

But, in the post-season breakdown of Aston Villa players, Nakamba is someone who flies under the radar a little bit — despite his general importance to the team.

He didn’t score important goals, he wasn’t a regular starter post-lockdown, and he wasn’t involved in many critical moments.

He’s been linked to a few moves away — but do Villa really want to see the back of Nakamba?

Was it a bad season for Nakamba then?

The tough-tackling midfielder emerged as an early star during the tough first portion of the season, and even earned a spot on some highlight reels thanks to a crunching challenge in the League Cup final, against Manchester City.

He’s rather unique in this Villa side as well.

The early stages of the season saw Nakamba singled out as a top performer and crucial to the side.

According to Statsbomb, Villa had given “Nakamba a thankless job, and he’s doing it admirably’’.

Villa didn’t always win, or draw, but Nakamba did a good job.

What was that job?

To sit back and break up play.

It was very clear the midfielder was doing the heavy lifting for the side’s defence and midfield — something which likely made him a focus of opposition analysis briefings.

Any praise of Nakamba is met by valid criticism — a yin/yang balance.

While Nakamba is good at winning the ball, there are questions about his ability to keep the ball safe, and provide the same support as Douglas Luiz.

There are plenty of caveats that we need to place in mind when we consider passing success.

For instance, it’s easier for some players in certain positions, and certain roles, to complete passes as their passing may be less risky than other positions.

For example, recycling possession, by passing sideways to build pressure, should in theory be easier, and less of a risk, than trying to angle a through ball in to a rushing attacking player.

More often than not, certain roles — your defensive midfielder — will be attempting much more of the former, and perhaps fewer, of the latter.

How well did Nakamba perform with his passes, then?

Short passes, as defined by FBref via Statsbomb, are passes of under five yards — so think more of your quick combinations in-and-around the box to fashion a chance in tighter areas, and less of passing back and around the defence.

Villa’s leaders in short passing attempts — Grealish and El Ghazi — lead in high areas of the pitch, and don’t complete a great deal of short passes (well under half — 37.6% for Grealish and 26.8% for El Ghazi).

Medium passing is defined as above five yards and up to twenty five yards, so it does cover (literally) a lot of ground and is clearly the most common pass type.

When we think of short, medium as defined by FBref does a good job of highlighting what we assumed to be “short’’ passes, as well as a few longer passes. Nakamba still ranks high here, with 88% of his passes completed.

He’s not a long passer, but he still managed to complete 77% of his longer attempts.

On average, he’s a good-enough passer.

We can say that due to the crystal-clear numbers.

On average, he’d still be fine, perhaps not as fine as the eye test demands, but good enough to include in a team due to the upside that his ball-winning abilities bring.

The criticism of Nakamba isn’t truly about just his passing, it’s about his passing under pressure.

That’s also a critique of his role itself though — one that perhaps tactically invites opposition pressure due to it’s nature as a holding point of the midfield.

That should perhaps invite conversation that the midfielder’s passing failings are not necessarily down to him, but also down to a tactical success of smart pressure by the opposition.

If Nakamba is the man doing a lot of work, why would you not target him?

Reflecting back on the Statsbomb analysis above, it was very clear that if you beat Nakamba, you beat Villa.

Of course, a breakdown in passing can occur without pressure as well, and that shouldn’t avoid criticism.

Nakamba hasn’t bailed out Villa well in some situations, when he could’ve done better.

Analysis by VenkyReddevil on Breaking the Lines shows Nakamba is much in the same boat as Ndidi and Rice in terms of both his defensive strengths and weaknesses.

There are situations where Nakamba should be utilised and those should be games were Villa do not expect to have the ball.

While Douglas Luiz is certainly gifted, he is an asset when carrying and using the ball.

Marvelous is the opposite side of the coin. He is an asset without the ball. There is room for them both, but perhaps more so for Luiz.— BirminghamLive/Sports Reporter.