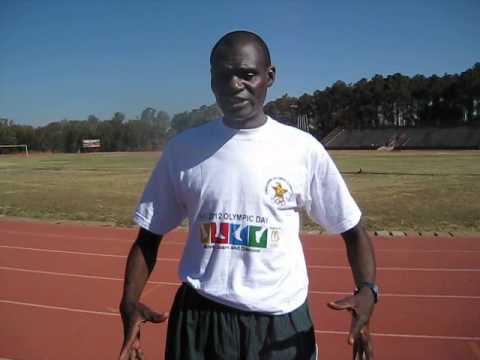 AT high school, his classmates nicknamed him “Pythagoras” because he could solve any Mathematics equation, but he possessed another hidden talent which would later earn him the moniker — “Mr Madrid”.

While academic brilliance plucked Abel Chimukoko out of rural Murehwa to Ellis Robbins High in Harare, it was athletics which literally took him to all the continents of the world.

Long-distance running has been Chimukoko’s life for the past three decades.

The 47-year-old earned legendary status after representing Zimbabwe at various prestigious international competitions between 1995 and 2005.

He represented the country at the 1995 and 1997 World Half Marathon Championships and was part of Team Zimbabwe at the 1998 Commonwealth Games in Kuala Lumpar, Malaysia.

Chimukoko raised Zimbabwe’s flag at the 2003 All-Africa Games in Nigeria, before capping it all with an appearance at the 2004 Olympic Games in Athens,  Greece.

“Sport changed me as a person. I achieved my objectives,” Chimukoko told The Sunday Mail Sport.

A policeman by profession, Chimukoko now works closely with the Zimbabwe Olympic Committee, where he is the Athletes Commission chairperson.

But the veteran long-distance runner just cannot stop running and is a familiar sight along Seke Road, where he does his daily road runs.

He still runs about 35km a day and sometimes hires cyclists to pace him up.

“I love running and I have a master plan I adhere to. I do between 32 and 36km daily and 45km every Saturday. I am used to it.

“Sometimes I pay cyclists to pace me up, but some disappoint me as they fail to keep up. I am amazed by my fitness level, which is high for my age,” Chimukoko said with a chuckle.

It exposed him to the world as he travelled across the globe during his heyday.

“To visit all the continents of the world, to reach the highest level of sport which is the Olympics and to travel using all modes of transport was a milestone.

“Through this sport I managed to assist my family members and other athletes improve their livelihoods.

“I am happy that I am a police officer in charge of sport. When you talk of national team athletes, you are talking about the police athletes,” he said.

His personal best of 1:02:07 hours in the half-marathon was achieved at the 1997 World Half Marathon Championships in Slovakia, where he came 24th.

“Competing at the Olympic Games was my biggest dream. Just the participation alone made me my own hero. I now understand the values and ethics of the Olympics and I am supporting them locally.

“Being in Greece in 2004, the home of the Olympic Games, made me feel great. Studying at the International Olympic Academy increased my love and happiness in sport.”

Chimukoko was born and bred in Murehwa, but his academic brilliance took him to Ellis Robbins, where he did his Advanced Level studies.

“I did my primary school at Chiguri and Dapandowe before I moved to Chimhau High School. I then transferred to Ellis Robbins.

“You can see the transition from the rural areas to Europe. I had the talent, but it was hidden as sport was secondary to my pursuit for academic qualifications.

“I was fortunate to be gifted with both. In class, my nickname was Pythagoras as I could solve any difficult equation,” he said.

Chimukoko’s nickname would later change to Mr Madrid after his sterling performances in Spain.

“The Spanish people are so accommodative. I appreciate the support they gave me.”

Chimukoko also revealed that he owes his career to former Zimbabwe Olympic Committee chief executive Robert Mutsauki, who is an ex-National Athletics Association of Zimbabwe president.

“My talent was identified by Robert Mutsauki when I was still at Ellis Robbins.

“He nurtured my talent to become who I am today. I joined the police force in 1994, but still continued with athletics. I always appreciate the support I got along the way. It wasn’t easy as some may want to think. It really needs dedication, discipline and passion.

“I am the only sportsperson in my family, but still, they support me.

“I encourage upcoming athletes to practice safe sports. Taking performance enhancing drugs is dangerous. Besides the health effects, if you are caught you will be banned and lose a lot.”

Chimukoko has three children and he hopes one of them will take up the sport.

“I am so happy that I managed to maintain my body and health and I would love one of my kids to follow my path.

“Did you know that I have maintained my body weight and structure to the extent that I have been putting on the same size of clothes for the past 26 years?

“I am preparing athletes in their life after sport. I am working with other organisations to help in the welfare of athletes.

“I need to see athletes being supported pre-, during and post- their careers,’’ Chimukoko said.-sundaymail