The founder of the MMM financial pyramid scheme Sergey Mavrodi, holding a copy of his banned book ‘Temptation’ in Moscow in May 2008. Mavrodi’s schemes stole life savings from more than a million Russians in the early 1990s AFP/Getty

Thousands of investors are feared to have lost their money after a pyramid scheme run by a convicted Russian fraudster crashed, somewhat predictably, in Zimbabwe.

MMM Global has swept across Africa, with branches promising returns on investment of 30 per cent a month in South Africa, Zimbabwe, Nigeria and some east African states.

It is masterminded by the former Russian politician Sergey Mavrodi, who went on the run when the original MMM – standing for Mavrodi Mondial Moneybox – collapsed in the late 1990s, losing investors an estimated $100m.

On its website, MMM Global unashamedly advertises itself as a scheme whereby new members “assist” older members by paying a fee to join. Older members are allowed to withdraw money after a certain period of time, and receive bonuses for encouraging others to sign up.

Mavrodi himself is reported to have gone into hiding after a separate entity designed to reward investors with the cryptocurrency bitcoin – dubbed the “Republic of Bitcoin” –folded in April this year. 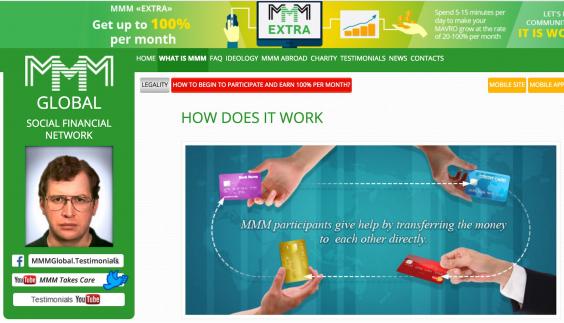 Not a pyramid: MMM’s website describes the scheme as a circular system where members ‘give help by transferring the money to each other directly’ (Screengrab)

And since then, a criminal investigation has been launched into MMM Global’s branch in South Africa, after a probe by the National Consumer Commission “found something” to suggest the scheme was acting illegally.

With Zimbabwe’s traditional financial institutions in jeopardy and the country gripped by an economic crisis, thousands turned to MMM Global as an investment that was avowedly independent of government control.

That’s despite a warning from the Reserve Bank of Zimbabwe that the scheme was fraudulent. RBZ warned members of the public that existing investors were “paid money not from genuine market investment of their funds, but from contributions made by new investors, until a point when the scheme can no longer attract new investors”.

Sure enough, users reported being unable to withdraw any funds earlier this month. One told The Herald newspaper: “When we started putting our funds in the scheme one could get assistance within seven days but things later changed to 14 days and when we were shut out the waiting period was 21 days.

Despite the cautionary tales of Zimbabwe and South Africa – and indeed the original MMM scheme – a branch is now proving increasingly popular in Nigeria.

The Central Bank of Nigeria has been forced to step in, warning consumers not to deposit money in any institution that is not insured by the Nigeria Deposit Insurance Corporation (NDIC).

The bank’s comms director, Isaac Okoroafor, described MMM Global as “a new Ponzi scheme … that is spreading like wildfire”.

“These people always come with very interesting propositions,” Mr Okoroafor said. “These are fraudsters who are just out there to collect people’s money and run away as soon as they hit their target.”

MMM Global’s members across Africa continue to defend its legitimacy, publishing screengrabs showing withdrawals as proof the scheme pays out.

In South Africa, where a Ponzi scheme is defined as any investment where the return is 20 per cent higher than the repo rate (currently 7 per cent), an anonymous member told business website Fin24: “MMM honestly tell people how it really works and do not promise people any return on the investments.

“As a donation programme, how is it possible to lose your donation? In MMM people ask each other to help them. It depends on the members themselves to maintain the continuation of the process of the provision of help to each other.”

A number of South African banks have now started shutting down accounts they believe could be linked to MMM, while in Zimbabwe the trusted mobile money transfer company EcoCash has distanced itself from the scheme, saying it is “not liable for any losses arising from the use of EcoCash to engage in illegal activities such as Ponzi schemes”.-UK Independent