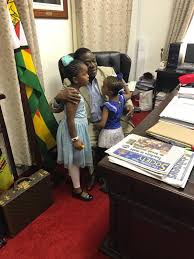 PRESIDENT Mnangagwa has lost his five year-old grandson after the boy succumbed to a respiratory condition at a local hospital where he was admitted.

The President’s grandson, Yasha Mafidi Mnangagwa, was the son of Sean.

In a statement, the Permanent Secretary for Information, Publicity and Broadcasting Services, Mr Nick Mangwana said Yasha was receiving treatment for respiratory complications.

“It is with a great sense of sadness that we inform the nation that His Excellency, President Cde E.D. Mnangagwa and the First Lady Dr A Mnangagwa have lost their beloved grandson, Yasha Mafidi Mnangagwa today,” he said.

“Yasha (5 years old) was Sean Mnangagwa’s son. He died at a local hospital where he was receiving treatment for respiratory complications.”

Mr Mangwana sent his condolences to the First family, saying they deserve their privacy at this difficult time of bereavement.

Marry Mubaiwa steps out after amputation