President Mnangagwa yesterday took Chegutu food lovers by surprise when he unexpectedly joined the queue in a fast-food outlet, bought his lunch and even tipped a cashier. The Head of State and Government and Commander-in-Chief of the Zimbabwe Defence Forces is now famous for his accessibility. 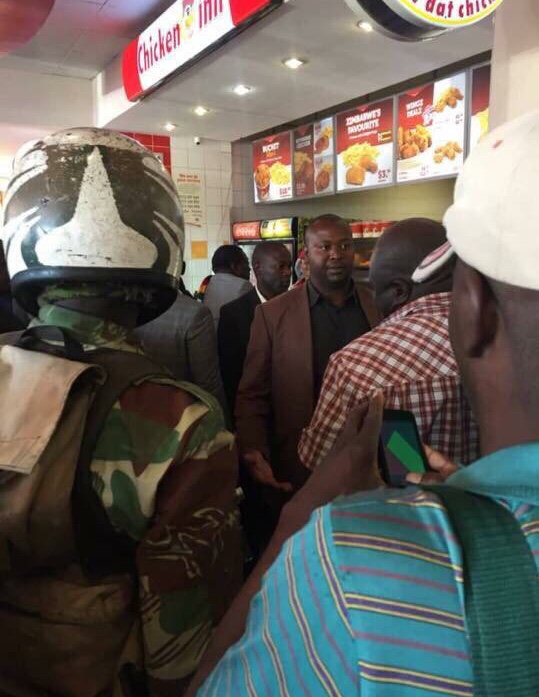 For instance, he has done away with the habit of hiring a marquee for official engagements, opting instead for modest tents just to shed VVIPS.

He also uses his escort vehicles to accommodate photojournalists and walks about to greet the crowd during rallies.
Yesterday afternoon he brought Chegutu to a standstill after he commandeered his full motorcade to Chicken Inn in the city centre.

Hundreds jostled to capture the rare moment on their smartphones and they recorded the scene free of any interference from Presidential security details.

President Mnangagwa, who is widely tipped to win the July 30 elections by a wide margin, has left many convinced that Zimbabwe is now witnessing a different political game to that of former president Mr Mugabe, who maintained a buffer zone between himself and the people.

“It has never happened in my life and somehow he proved to be worthy of my vote.
“He ordered a two-piecer and a minute maid, paid $3,75 with US$20 and told me to keep the change. He is very welcoming and makes you feel comfortable in his presence.”

Management at Chegutu Chicken Inn could not believe a rare visit by the number one citizen.
The food outlet’s manager Mr Peter Mutate said as an organisation, they felt honoured to serve the President.
“We can describe him as an amazing man, very friendly and free to interact with,” he said.

“In other words, he is a people’s person. Some of our staff members felt free to greet him. At the end of the visit, many people were left convinced that indeed the country is now witnessing a different political game.”

One food lover at Chicken Inn, Mr Lovejoy Ngondo, said: “We have seen for the first time that this is a real President who is human like us. He eats Chicken Inn like us. At least he lives the same way we do. We can trust him with our lives.”
Many who spoke to The Herald said after walking side by side with the President on his way to and from the food outlet it was now clear that Zimbabwe was witnessing a new political dispensation where leaders are closer to the people.-Herald