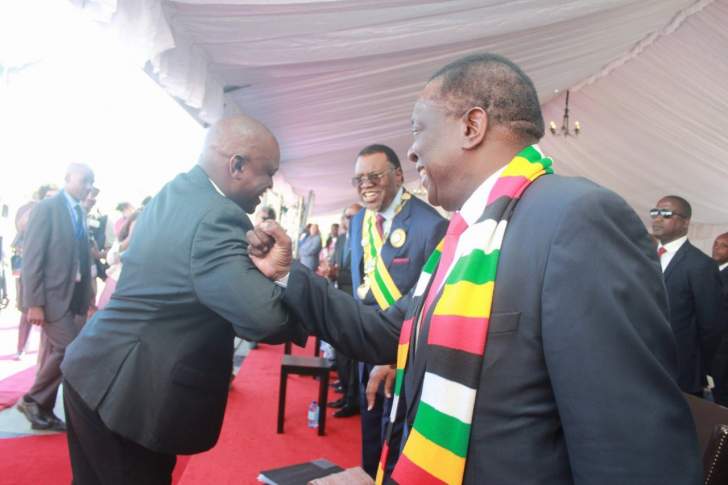 Zimbabwean President Emmerson Mnangagwa will travel to Glasgow, Scotland, for the United Nations (U.N.) Climate Change Conference next week along with a “bloated entourage of over 100 people” of whom “more than 60 have nothing to do with Climate Change,” New Zimbabwe reported Thursday.
Zimbabwe President Emmerson Mnangagwa (C) looks on as members of the Zimbabwe Republic Police (ZRP) enter to eject opposition party Members of Parliament who refused to be upstanding when he entered the chambers for Minister of Finance’s presentation of his budget statement in the Parliament of Zimbabwe November 22, 2018 …

President Mnangagwa’s outsized U.N. delegation will include his “family members, friends and Zanu-PF youths who will enjoy a two-week long stay in the UK on taxpayer’s funds [sic],” according to the online newspaper.

Zanu-PF, or the Zimbabwe African National Union–Patriotic Front, is a far-left political party that has ruled Zimbabwe since the southern African nation gained independence from Britain in 1980.

Farai Maguwu, the director of Zimbabwe’s Center of Natural Resource Governance (CNRG), criticized President Mnangagwa’s decision to treat his official state visit to Scotland next week as a family vacation. The U.N. Climate Change Conference, also known as “COP26,” is scheduled to take place in Glasgow from October 31 to November 12.

“Zimbabwe is sending a delegation of more than 100 people to COP26 in Glasgow, some are already there whilst others are packing their bags,” Maguwu wrote in a Twitter statement posted on October 26.

“Of the 100 plus delegates, more than 60 have nothing to do with Climate Change,” he alleged.

“Among the non-technical members who constitute [the] majority of the delegates are relatives and friends of powerful officials responsible for selecting those attending the jamboree,” Maguwu continued.

“Some technical staff could not travel to Scotland because spaces had been taken by non-technical climate tourists,” he claimed.

“Zimbabwe’s delegation is said to be more than double that of South Africa whose population is more than four times bigger than ours whilst their economy is [one] thousand times better and healthier than ours,” Maguwu observed.

“Our non-technical delegates on the other hand have found yet another reason to spend what we do not have,” he lamented.

“Zimbabwe will be sending a ‘strong delegation’ to the [COP26] summit,” John Bhasera, a secretary for Zimbabwe’s Lands and Agriculture Ministry, confirmed to reporters on October 26.

The upcoming trip to Scotland will mark President Mnangagwa’s first time traveling to the U.K, the leader revealed on Tuesday.

“I am eagerly looking forward to my first visit to the United Kingdom,” Mnangagwa told Zimbabwean journalists on October 26.

“COP26 meeting of nations comes at an extraordinary time in world history,” he added.

President Mnangagwa’s trip to the U.K. for the U.N. summit additionally serves as “the only one by a Zimbabwean state leader in 25 years as a result of a diplomatic tiff that arose during the chaotic land reform programme [of the] early 2000s,” New Zimbabwe noted on Thursday.

Zimbabwe’s government agreed in July 2020 to pay $3.5 billion to white farmers displaced by the country’s “land redistribution” campaign since the initiative launched in about 2000. The pledge served as a largely symbolic gesture because Zimbabwe — a deeply impoverished nation in part due to its decades-long “land redistribution” program — did not have the promised funds.

“Starting in 2000, thousands of white Zimbabwean farmers were forced off their land by violent state-backed mobs or evicted in dubious legal judgments, supposedly to help black people marginalized under British colonial rule,” Agence France-Presse (AFP) reported in 2018. “The farms, however, were often allocated to [then] President Robert Mugabe’s allies [with no knowledge of farming] and fell into ruin, leaving tens of thousands of rural laborers out of work and sending the economy into a tailspin as food production crashed.”