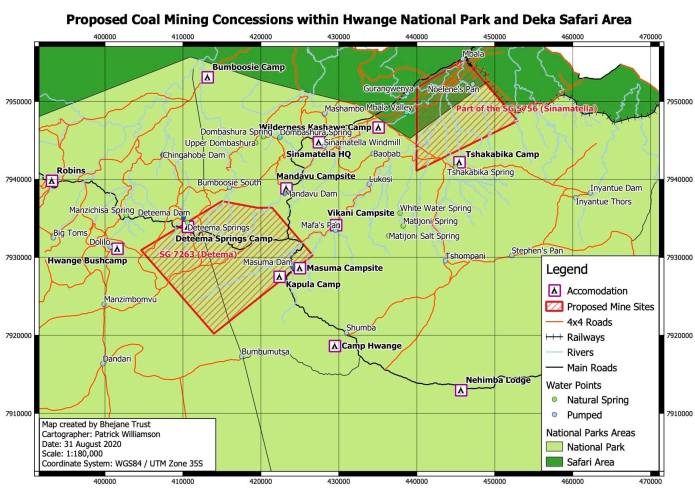 COAL MINING IS SET TO TAKE PLACE INSIDE HWANGE NATIONAL PARK, UNLESS LOBBYING THE GOVERNMENT IN ZIMBABWE CAN PUT A STOP – According to a local tourism operator – This will result in serious damage to Zimbabwe’s tourism and wildlife image, if Mining were to take place inside Zimbabwe’s largest National Park which is home to the country’s biggest herd of Elephant there is no doubt it would result in a dramatic loss in revenue and jobs in the tourism industry.

Information provided on line by a recognised organisation working inside the Hwange National Park provided the following – Our Rhino Monitoring team recently found some Chinese in Hwange Park – we managed to ascertain they were drilling core samples for coal. Parks arrested them and turned them over to the Police. However, they soon reappeared with a permit giving them the right to carry on in the Park with exploratory drilling. They did this without any consultation with the Area Manager and seem to feel they have a right to go wherever they like to.

The other concession granted , SG 5756 to the Zimbabwe Zhongxin Coal Mining Group has also contracted SustiGlobal to do an EIA, again with an undated Stakeholders Questionnaire, and again to cover the initial exploratory drilling and opening of roads, building camps, etc. However, they have started exploratory work in the Park, so it is not sure if an EIA permit has been granted or not.

Bhejane Trust has replied to the questionnaire and waits to hear back from SustiClobal. We will be ready to support National parks where required.

This information was taken from the Bhenjane Trust Face Book Page.-https://victoriafalls24.com/