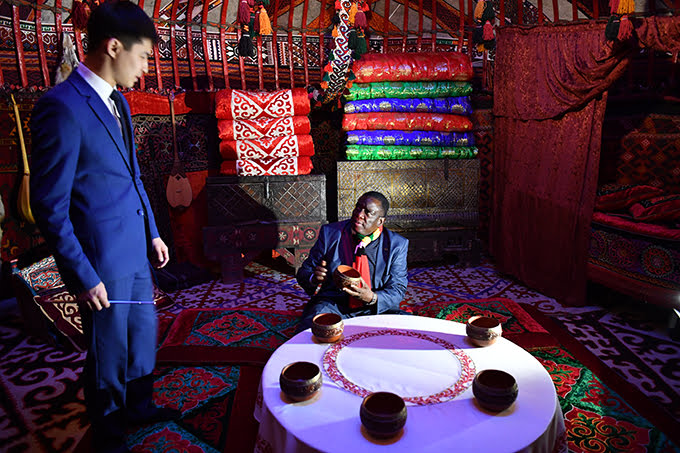 The US$27 million medical cannabis farm and processing plant at Mount Hampden set up by Swiss Biocieuticals Limited was commissioned yesterday by President Mnangagwa who urged others with permits for natural resource businesses to follow the company’s lead and open their businesses.

He said the rapid development of the processing plant, which adds significant value to the crop, was testimony of the success of the Government’s engagement policy and the confidence Swiss companies and investors had in Zimbabwe and its economy, with Switzerland now one of the top European investors.

The President said it was important for investors to quickly operationalise their permits and licences for the benefit of the economy in general and people in particular, in line with Government’s set national targets and the desire to have an upper middle income economy by 2030.

Only 15 of the 57 cannabis permits issued since 2018 have been activated.

But the Swiss Biocieuticals medical cannabis farm has a thriving 5ha crop of cannabis after the investor was issued an operating licence following the Government’s decision to legalise production of cannabis (mbanje or dagga) for medical and scientific purposes.

The development, which dovetails with President Mnangagwa’s ‘Zimbabwe is Open for Business’ mantra, is expected to enhance foreign currency generation for the country.

Said President Mnangagwa: “I challenge other players within the medicinal cannabis sub-sector to speedily set up their enterprises, with focus on value addition and beneficiation.

It is disappointing that since 2018, only 15 out of the 57 entities issued with cannabis operating licences are operational.

“Such licences should not be held for speculative purposes and those not using them risk Government invoking the ‘use-it or lose-it principle’.

All licences, permits, claims and other such instruments issued to investors must entail that national assets and resources are used for the benefit of our economy and ultimately improving the quality of life of our people.”

President Mnangagwa commended the Switzerland-based firm for its timely investment in the medicinal cannabis farm, processing plant and value chain worth US$27 million.

“The milestone is testimony of the success of my Government’s engagement and re-engagement policy.

It further demonstrates the confidence that Swiss companies have in our economy through their continued investment in Zimbabwe,” he said.

So far, said President Mnangagwa, investments, support and partnership from entities linked to the Swiss Confederation span many sectors such as agriculture and its value chains, cement, manufacturing and food processing and spheres such as governance, institutional building and preservation of the country’s cultural heritage.

“As Government, we recognise that Switzerland is one of the leading European investors and we are ready to receive more investments from that country,” he said.

He urged the company to increase its hectarage from the current 5ha and consider creating mutually beneficial synergies with local institutions of higher learning towards broadening the country’s bio-medical skills base, research and development initiatives.

The President commended the firm for creating employment for local people including women and youths.

The ongoing economic reforms had resulted in notable economic growth.

“This should motivate investors from across the world to come to produce high quality products, goods and services from our country, for the wide markets within both the Sadc region and the African Continental Free Trade Area,” he said.

“This is a momentous occasion where the country continues to expand investment into the multibillion dollar industry in the medicinal value chain as we march towards the upper middle economy by 2030,” he said.

He said other areas where cannabis was being produced include Shamva, Bulawayo, Kadoma and Mazowe, among others.

Lands, Agriculture, Fisheries, Water and Rural Development Minister Dr Anxious Masuka said the growing of cannabis was adopted by Government under a Tobacco Transformation Plan which envisaged the two as alternative crops.

He said good agricultural practices which are a prerequisite for the sustainable development of a value chain were also being developed.

He described the growing of cannabis in the country as a milestone, adding that it was consistent with its ‘open for business’ thrust.