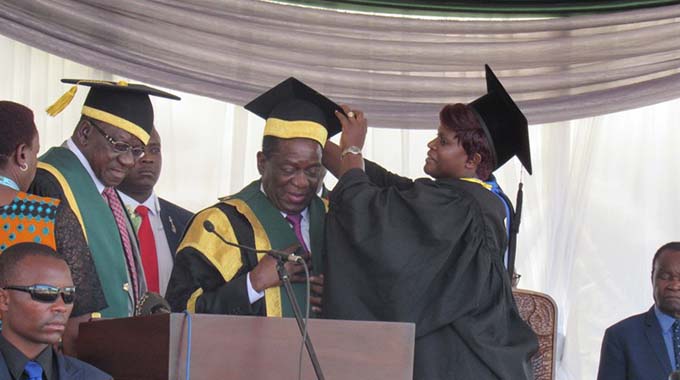 The President was on Wednesday conferred with an Honorary Doctorate of Law by the University of Zimbabwe.

In a citation accompanying the conferment of the honorary doctorate to the President at Great Zimbabwe University, former Midlands State University Vice Chancellor Professor Emeritus Ngwabi Bhebhe said the President deserved recognition for the role he played in shaping the country’s history.

Prof Bhebhe said President Mnangagwa overcame many challenges in his struggle to create a free and just Zimbabwe after colonial rule.

“His Excellency more than deserves this highest honour and distinction that Great Zimbabwe University bestows upon anyone in recognition of an individual’s striking and unparalleled achievement or contribution to society,” he said. “Such illustrious and distinguished individuals come rarely in any society and we are fortunate to have one in the person of Emmerson Dambudzo Mnangagwa.”

Prof Bhebhe said President Mnangagwa defied his humble background and rose to become a towering figure in the history of Zimbabwe’s liberation struggle after being among a cast of the first group of young people to skip the country’s borders and undergo military training to confront the settler regime.

“His indomitable fortitude saw him endure excruciating, brutal torture and severe hardships of colonial imprisonment,” he said. “Most of the time he served his prison sentence, he lived in a D cell, a cubicle almost the size of a big kitchen refrigerator.’’

Prof Bhebhe said the President overcame the challenges culminating in his admission to the Bar of the High Court in Zambia in 1976.

He was later to serve former president Mr Robert Mugabe with distinction after his appointment as his assistant during the liberation struggle.

Prof Bhebhe said President Mnangagwa showed his political skills when he successfully superintended over the integration of warring armies, namely Zanla, Zipra and Rhodesian forces, to create one unified army that developed to become the envy of Africa and beyond.

“Cde Mnangagwa has held several ministerial posts starting with that of State Security,” said prof Bhebhe. “That was a post that brought him face to face with apartheid South Africa, a pariah state which sought to preserve its domestic colonial oppression of Africans by means of military destabilisation of its neighbours.

“It is a chapter of our history which left us with deep scars and bruises.’’

Prof Bhebhe said President Mnangagwa deserved to be honoured as a fierce opponent of the death penalty, a stance that saw him refraining from signing death sentences when he was Minister of Justice.

President Mnangagwa escaped the gallows during the Rhodesian era after bombing a train in 1965.

The sentence was commuted to 10 years on account of his young age.

Prof Bhebhe said President Mnangagwa was a tolerant leader, who kept his cool despite being publicly tormented by his detractors before he eventually assumed the presidency.

‘“Once in power, His Excellency set about ending Zimbabwe’s isolation and re-inventing our politics, placing the economy at the heart of our national narrative with the mantra ‘‘Zimbabwe is open of business’. He committed his Government to eliminating all forms of corruption and to re-engage the West and the rest of the world in an effort to achieve national economic recovery,” he said.

Prof Bhebhe said President Mnangagwa showed the world that he was a leader with rare fortitude after promising free and fair elections and kept the promise by leading the country to arguably the most peaceful polls in post-independent Zimbabwe on July 30.

He said President Mnangagwa also showed bold leadership by appointing a Commission of Inquiry to probe the August 1 political violence.

President Mnangagwa said he was humbled by the recognition from GZU.

He noted that his past and future contribution to Zimbabwe was not about acclaim.

President Mnangagwa said there were many unsung heroes who sacrificed their lives for Zimbabwe to be what it is today.

“Ours was for the love of our country and motivated by the desire to see a better quality of life of all the people of this great land,’’ he said. ‘’I receive this award, therefore, fully cognisant of this rich heritage, which this university, the education sector and the country in general must reclaim, revive and restore.

“Our national confidence, pride, boldness and determination must be re-ignited once again, as we journey towards the modernisation and industrialisation of our country to attain Vision 2030.”

Higher and Tertiary Education, Science and Technology Development Minister Professor Amon Murwira paid tribute to President Mnangagwa for guiding the country towards the use of heritage-based science to develop the economy.-zimpapers