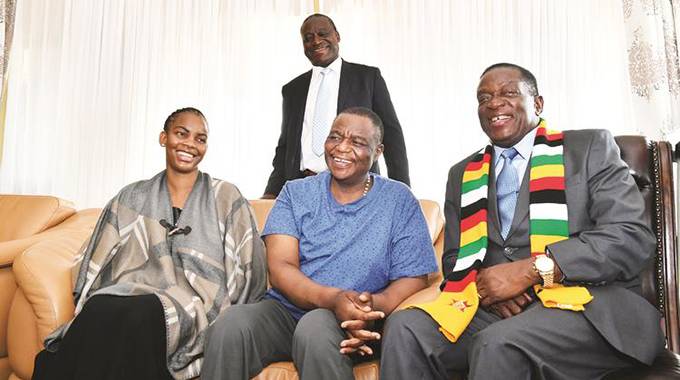 Spotlight Zimbabwe|In all but the closing chapter of President Emmerson Mnangagwa’s young presidency, the ruling Zanu PF leader has reportedly sent emissaries to request for an exit package deal from Vice President, Rtd General Constantino Chiwenga, and his hardline military backers in preparation for exile, Spotlight Zimbabwe, has been told.

Mnangagwa who is living on borrowed time in office, faced embarassing disapproval and international isolation this week in New York, when he addressed empty chairs at the United Nations (UN) General Assembly, following a walkout by diplomats registering their protest and displeasure at his regime’s increasing wave of political repression and abduction of activists.

Mnangagwa who took a delegation of almost a 100 officials on the U.S. trip aboard a chartered luxurious plane, blowing millions of scare foreign currency and taxpayers money, was airborne as the primate city shut down it’s water treatment plant due to lack of forex to secure chemicals, causing outrage over the President’s Office insensitivity and urge to splurge.

This publication last week reported, that Chiwenga, was going to use the country’s dreaded Joint Operations Command (JOC), to forcefully kick out Mnangagwa from office, and is said to be polishing the nitty-gritties of the plan from China together with a coterie of generals in government, who now want Mnangagwa gone without further delay.

High level government officials and a senior Zanu PF politburo source, said the wheels are coming off on Mnangagwa’s term as Zimbabwe leader, and that he has opted to negotiate for an exit package deal before going into exile, because the situation will get nasty and dangerous once Chiwenga returns home from China, where he is receiving special medical treatment at a military hospital in Beijing.

“The wheels to his presidential term are coming off,” said a high ranking official with the exchequer. “It is so serious that even his close allies, including a prominent government minister are also planning to skip the country, because this whole ship is sinking. We have received information that Mnangagwa has sent emissaries to the vice president to come up with a package for him before he steps down into exile, possibly to the United Arab Emirates. Other countries being mentioned as safe havens for him include, Belarus, Canada and Japan.”

A former aide who worked for Mnangagwa when he was vice president between 2014-2017, told Spotlight Zimbabwe in August, that the president had reportedly found a bolthole in the UAE, where he is thought to have been offered State protection should the need arise, after befriending the Crown Prince of the Emirate of Abu Dhabi, Sheikh Mohammed bin Zayed Al Nahyan.

Canada was previously involved in brokering an exit package for the late president Robert Mugabe, from behind the scenes with engagement of the UN and South Africa to save Zimbabwe from economic ruin and a humanitarian disaster then.

A former Canadian paliamentarian for Esquimalt—Juan de Fuca in British Columbia, Keith Martin, wrote a letter to former South African president, Thabo Mbeki, in 2007 highlighting the appalling political situation in Zimbabwe, and urging him to “lead an initiative” for Mugabe to step down, in exchange of not having to be dragged before the Hague, and some kind of favourable exit deal incentive.

Mnangagwa received a bootlicking peace, unity, and development award a few days ago, from Zanu PF members in Canada and the United States.

Intelligence sources also said the Zanu PF boss, could easily relocate to Japan, as one of his inner circle cabinet ministers has connections with bankers and business people at the island country in East Asia, which he can use to organise a new home for Mnangagwa.

“If the UAE is not his first pick, chances are that he will opt for Japan or Canada. Belarus is not in the immediate picture. Japan is easier, because one of his inner circle cabinet ministers has connections with bankers and big business over there. Actually the minister in question was the brains behind Mnangagwa’s chairing of a session at the Japan-African business forum in Yokohama, last month.”

The ruling party politburo member said Mnangagwa had also tabled an alternative deal to reach an understanding with VP Chiwenga and the army, but it was all in vain as military hardliners will not tolerate nonsense.

“Mnangagwa’s camp have tried in vain to offer an alternative deal, of reaching a compromise with Chiwenga’s faction and the army, which will see the VP continue in his position as a ceremonial vice president until he has fully recovered from his health challenges,” he said.

“While Chiwenga recuperates Mnangagwa’s backers proposed to appoint defence minister, Oppah Muchinguri-Kashiri, as the substantive first vice president of the country, for the duration needed for Chiwenga to be back on his feet, a position which hardline securocrats said was nonsensical and refused to entertain arguing that Chiwenga is a heartbeat away from becoming president.”

Chiwenga is believed to be on the mend in China, although his real health status remains a mystery. Other government insiders said under Mnangagwa’s proposed exit package, he is seeking among other things the right to keep his farms and mansions, including his flagship Sherwood Farm in Kwekwe.

Mnangagwa is also asking for his business interests in the fuel sector, banking, mining, and mobile communications to be spared, the insiders said.

In a sign of a growing vote of no confidence by his own lieutenants, one of his advisors, Shingi Munyeza, on Wednesday questioned Mnangagwa’s managerial competencies, likening the country to a train that was racing for crash, according to local online media reports. Munyeza said Zimbabwe was a train that has been steered in the wrong direction at full speed by its leaders.

“We think we are dealing with a static matter, it is an accelerating situation in the wrong direction which needs to be slowed down, stopped so that we can change where we are going,” said Munyeza at a National People’s Convention convened by civil society groups in the capital.

“We have not yet changed where we are going. Somehow, those in the locomotive and those in the wagon have got to come together and start saying ‘let us agree on how to stop this train, we are all going to crash and burn’. I am not a sadist or a prophet of doom but I can tell you the truth…we will crash at some point if we do not deal with this. We are at war, it is the war of reformer versus conservatives and hawks and let me tell you what is happening, the reformers are losing, the conservatives are losing, that is why the train is picking speed. We are getting closer to the next station where we can either change direction or cause a carnage, we need to cease fire, let us all come to the table engage and dialogue. There must be capacity and competence. We always assume those in leadership have capacity and competence, I stand to question all that now.”

Mnangagwa was also severely reproved by South African opposition Economic Freedom Fighters (EFF) leader Julius Malema, as a chancer on Monday, after arriving in the country to pay his last respects to former First Lady Grace Mugabe, following the death of Mugabe early this month.

“We cannot rely on these people to keep his (Mugabe’s) legacy. There can only be one Mugabe, these are chancers. So they should not even try and be like him. They won’t even come near him,” Malema said.

ZANU PF Speaks Out On Mugabe Secret Burial In Zvimba