Home Business Mnangagwa Swoops On Ally, Nephew Who Were Pouring $1 Billion Into The Black Market To Mop Up The US
BusinessCrime & CourtsMain NewsPoliticsZimbabwe

Mnangagwa Swoops On Ally, Nephew Who Were Pouring $1 Billion Into The Black Market To Mop Up The US 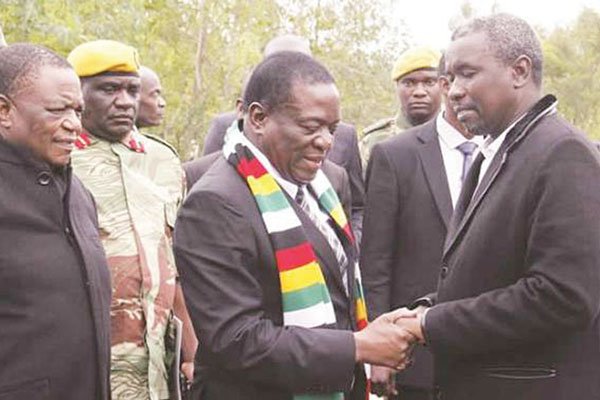 President Emmerson Mnangagwa was briefed that companies linked to one of his advisors and a relative were fuelling the parallel market trade in foreign currency before the Reserve Bank of Zimbabwe (RBZ) froze their accounts on Friday.

Fresh information obtained from RBZ insiders has revealed that the decision to freeze the accounts was first taken on Wednesday when the local currency was still pegged at $15 to US$1 on the parallel market.

The central bank’s financial intelligence unit (FIU) had reportedly picked information that the identified companies were pouring in over $1 billion into the parallel market to mop up US dollars.

Some of the money was meant to buy inputs for the government’s controversial command agriculture programme and luxury cars for Cabinet ministers.

RBZ insiders said a decision was taken at the initial meeting that FIU head Mirirai Chiremba should not be involved in the action being taken by the central bank against the companies because he was close to Tagwirei.

“A memo was drafted and sent to the Presidents’ Office for approval,” the source who attended the meeting said.

“It detailed security risks that the country faced if the exchange rate was not dealt with.

“It stated that President Emmerson Mnangagwa’s administration could be in trouble as the exchange rate movement was now causing havoc in the economy.”

On Thursday, the exchange rate increased drastically from USD$1: ZWL$16 to US$1: ZWL$23 for Ecocash and US$1: ZWL$25 for electronic transfers.

There was also a sharp increase in the prices of basic commodities.

“An emergency meeting was held by the FIU team to look into the situation amid fears that by Friday, runners for these firms were vowing to take the rate to US$1: Z$30,” said another source.

“A decision had to me made instantly and two options were available: either to use the Zanu PF youth league deputy secretary Lewis Matutu to name and shame those behind the ‘heinous act’ or to instruct a freeze of their accounts.”
Mnangagwa is said to have approved the decision to freeze the accounts.

“The president was made aware of the decision considering that two of his close allies were involved, Tagwirei and
Tarisai Mnangagwa (Spartan Securities), a nephew, as well as a member of his close security,” said the source.

“He did not object, especially after being told that if the matter was not dealt with urgently, it could cause an uproar.

“He said ‘as long as it was in the national interest, it must be done.”

Tarisai is close to Mnangagwa and was part of the people that helped the Zanu PF leader to escape to South Africa after he was fired by former president Robert Mugabe in 2017.

In 2017 he was investigated by the Zimbabwe Anti-Corruption Commission for money laundering, but the case was abandoned after the coup.

RBZ sources said Tagwirei tried to engage Mnangagwa’s office after the directive to freeze the Sakunda accounts, but did not get immediate joy.

On Thursday, Matutu took to social media to warn the companies that were behind the parallel market to stop their activities as he was prepared to publicly name them.

Matutu also advised the government to review the funding model for command agriculture. Sakunda is “the financier” for the programme.

“There are two individuals who are feeding the black market with bonds, as a result the rate has gone up, please stop the nonsense now and know that you’re the enemy of the people,” Matutu tweeted.

“The government should consider a different model to fund command agriculture and acquisition of vehicles, companies responsible mustn’t abuse facilities.”

Croco Motors was reportedly given the tender to supply cars for ministers. Tagwirei did not respond to a text message sent to his phone seeking a comment while Tarisai was unavailable.

RBZ acting governor Kupukile Mlambo referred questions to the FIU. Information ministry permanent secretary Nick Mangwana said: “In normal cases, the president does not interfere with the affairs of an institution.”

Last night RBZ insiders said the order to freeze the accounts had since been lifted, but the information could not be independently verified.-amh