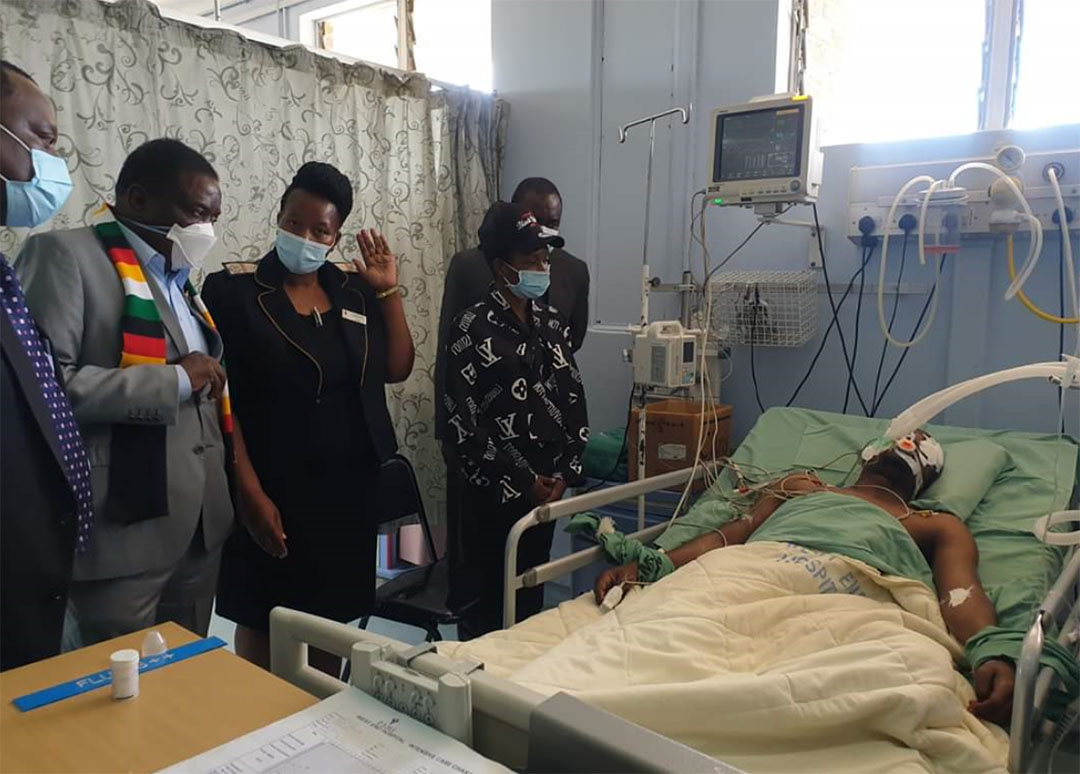 One CIO agent was killed after their vehicle overturned in a bendy section of the Centenary-Muzarabani road near the Mavhuradonha Mountain Range on Friday.

The first lady, who was unhurt, was on her way to Muzarabani where she was due to hand out food parcels to families hard hit by the 35-day coronavirus lockdown imposed by the government.

Mnangagwa spoke to one of the security agents who was not on life support during a visit to the West End Hospital in Harare, wishing them a speedy recovery.

Initial reports suggested the driver of their vehicle, a Toyota Hilux, was avoiding slamming into the first lady’s vehicle which slowed down directly in front of them, forcing him to leave the road. The vehicle overturned and rolled down a sharp embankment before coming to a stop against a tree.

Through the pain … One of Auxillia Mnangagwa’s security aides speaks to Mnangagwa from a hospital bed at the West End Hospital
The fatal accident has raised questions over whether the first lady should have been going to Muzarabani, in apparent breach of lockdown regulations which state that only people providing “essential services” are allowed free movement.

Mrs Mnangagwa appears to be exploiting an unofficial role as “health ambassador”, which she was given by embattled health minister Obadiah Moyo, to break the lockdown rules.

She travels with a dedicated team from the state broadcaster, ZBC, and the Herald newspaper – but both outlets did not report the fatal crash on Friday.-Zimlive

South Africans get creative, from home brews to sneaking over the border into Zimbabwe searching for a beer