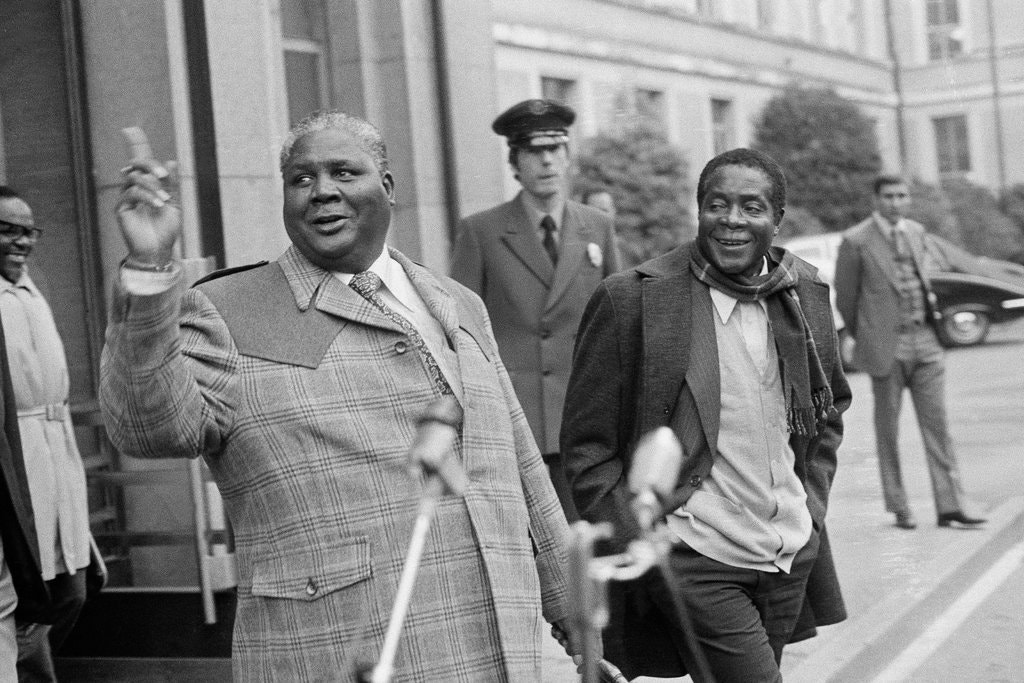 President Emmerson Mnangagwa is behind a bizarre push to exhume the remains of Robert Mugabe in the vain belief that his predecessor was buried with a mystic scepter, or “tsvimbo yaMambo” in the Shona language, that would give him commanding authority as a leader, Mugabe’s exiled nephew Patrick Zhuwawo has sensationally claimed.

A village chief sent tongues wagging across Zimbabwe and beyond on Tuesday after summoning Mugabe’s widow Grace to a village court on accusations of violating tradition by burying the late former president inside of his rural homestead and ordering his exhumation for reburial at a family gravesite.https://d524b0e02f8cc3ee2cfb4671e33206d0.safeframe.googlesyndication.com/safeframe/1-0-38/html/container.html

Chief Zvimba ordered the former first lady – who is unwell and seeking medical treatment outside the country – to appear next Thursday.

“You are facing charges of burying the late Robert Gabriel Mugabe at his homestead. This is unheard of in Chief Zvimba’s area. I want you to rebury the late president in accordance with our traditions and in Zvimba at a place designated by the family and his late mother,” the chief said in his summons.

The summons, allegedly served by an officer from Mnangagwa’s office, riled Mugabe’s family with Zhuwawo charging that “this is happening because of a political agenda that Emmerson Mnangagwa wants to put forward.”

“He knows very well that Amai Mugabe is not well, she is out of the country, he knows that she is receiving treatment. He knows very well that she will not be able to attend and yet he sent one of his officers to be the head of the delegation that went to deliver the summons to someone that they know very, very well, will not be available,” Zhuwawo told the SABC on Wednesday from South Africa, where he sought refuge following the 2017 military coup that toppled Mugabe.

He alleged that “the reason Emmerson Mnangagwa wants to exhume the mortal remains of president Mugabe is because he has been looking for what is referred to as tsvimbo yaMambo/[induku yeNkosi], which is really the scepter that he believes will give him the authority to be the leader of Zimbabwe.”

Zhuwawo continued: Emmerson Mnangagwa, in my presence and the presence of my two colleagues, has indicated that he believes that there are 16 traditional leaders who will effectively anoint the person that will be able to effectively govern Zimbabwe and he believes that president Mugabe had that tsvimbo yehuMambo/[induku yobuKhosi] (royal scepter).”

The late president’s nephew accused Mnangagwa of being an occultist, adding he is going after Mugabe’s “non-existent” scepter because “he is very uncomfortable about the prospects of the 2023 elections, and he believes that he will need to secure those elections through violence.”

But the violence, Zhuwawo reasoned, “will have to be perpetrated by individuals and he would like to be able to say to those individuals that they are protected spiritually. And this is the perspective that he has, this is why he is pushing this.”

Asked by the SABC anchor if he had any evidence, Zhuwawo affirmed: “I have the evidence of him having spoken to me and to a couple of my colleagues and one of my colleagues is willing to turn around and say ‘look this is what he believes.’ He believes that Zimbabwe, the governance of Zimbabwe is determined by 16 traditional leaders and he believes that it is those traditional leaders who handed a scepter to president Mugabe, but president Mugabe had indicated to him that no such thing ever happened.”

Zhuwawo also ripped Chief Zvimba saying he had no jurisdiction as a traditional leader to question Mugabe’s burial place because “issues of births, deaths, and burials are governed by the appropriate legal Act which has precedence over traditional law.”

“We are not going to dignify such an insult by even attending. We do know that Chief Zvimba was promised cars during the funeral of president Mugabe and he was very, very vocal about wanting to disregard president Mugabe’s wishes on where he would finally be interred.”

“We wanted a tamper-proof casket because of (the fear of) rituals. People are after his body or his body parts,” Mugabe’s nephew, Leo, was quoted as saying at the time of his death. –Kukurigo