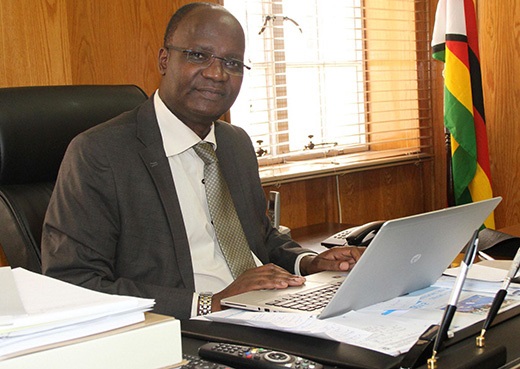 EXILED former Higher Education minister Jonathan Moyo claims President Emmerson Mnangagwa tried to assassinate him and he has evidence to prove it.

Moyo made the claims as he reacted to reports that the government is trying to extradite him from Kenya where he is exiled after he fled Zimbabwe during the 2017 coup that toppled the late Robert Mugabe.

The government says it wants the former Zanu-PF strategist to return home to face charges of fraud involving Zimbabwe Manpower Development Fund (Zimdef) resources when he was Higher Education minister.

Moyo said he fled the country after soldiers tried to kill him and his family and argued that Mnangagwa’s government still wanted him dead.

“I am where I am, in terms of international law following a premeditated military attack on my home and family whose aim was to kill me, on November 15, 2017,” Moyo said.

“The evidence of that military attack is in the public record.

“The only person who does not know about it is Mnangagwa’s henchman, prosecutor general [Kumbirai] Hodzi.

“His extradition quest, which will be vigorously dealt with in terms of international law, is a desperate last-ditch effort to do what the army failed to do against me on November 15, 2017.”

Moyo said the government tried to engage Interpol to facilitate his arrest and extradition but failed.

He said certain incidents, including alleged plots to assassinate him, showed that the government was persecuting him.

“Prior to this, Mnangagwa had gone out of his way to use Interpol to no avail,” Moyo added.

“When the Interpol option failed, Mnangagwa used all sorts of extrajudicial plots against me, including attempted assassination, whose incontrovertible evidence I have.”

Moyo said while Hodzi was drafting the extradition letter, the Zimbabwe Anti-Corruption Commission (Zacc) was working with the Military Intelligence Department (MID) to seize his car in Harare.

“In the operation, MID and Zacc illegally seized a vehicle, a Ford Ranger, that I was allocated in 2011 as a Jomic commissioner, along with other commissioners from the MDC-T, MDC-Mutambara and Zanu-PF who formed the then GNU,” Moyo said.

“Astonishingly, and to show how political Hodzi’s extradition plot is, the MID and Zacc working with a very vulgar Ferret operative from the CIO claimed that they were seizing the Ford Ranger, allocated to me in 2011 when I was not even in government, in connection with the 2016 Zimdef allegations that arose when I was Higher Education minister between July 2015 and November 2017.

“One cannot find a more malicious, more political, and more ridiculous case than this.

“Meanwhile, Mnangagwa’s henchman, prosecutor general Hodzi, wants the world to believe that his extradition conspiracy over a highly politicised Zimdef case that came up in 2016 is not political.”

He queried why the military’s MID was working with Zacc in this case.

“When the MID and Zacc illegally seized my Ford Ranger last Thursday, they caused a public spectacle in which they humiliated and abused a close relative of mine; and the CIO Ferret operative made a lot of scandalous allegations against me, including that I poisoned Emmerson Mnangagwa in 2017,” the former minister said.

“He also said Mnangagwa is going to seize all my assets, including my Mazowe farm, like he is doing to former PCG (police commissioner general) Augustine Chihuri.

“The illegal seizure by MID and Zacc last Thursday of my Ford Ranger vehicle, allocated to me by Jomic way back in 2011, is proof enough of the political nature of the MID and Zacc case.”

John Makamure, the Zacc spokesperson, denied charges that the commission was working with the military and that it was involved in the seizure of Moyo’s car.

“Zacc is an independent organisation and does not work with the military,” Makamure said.

“We carry out our own independent investigations. I am not aware of any confiscation of a vehicle owned by Jonathan Moyo.”

“We believe in the rule of law.

“That statement by Jonathan Moyo is a pitch for him to be considered as a genuine asylum seeker. He is not. He is a fugitive from justice.

“We have a lot of faith in our criminal justice system and we believe everyone should have their day in court, Jonathan Moyo included.

“The only attempted assassinations we are aware of were on President Mnangagwa when he was VP by the G40 cabal and as president in Bulawayo. There is no prize for guessing who was behind those attempts on the president’s life.

“Fugitives from justice should come and clear their names. Some have been cleared, vindicating the impartiality of our judicial system.”

Moyo is accused of diverting US$244 575 in Zimdef funds, but he maintains that the charges were politically motivated.Source – the standard