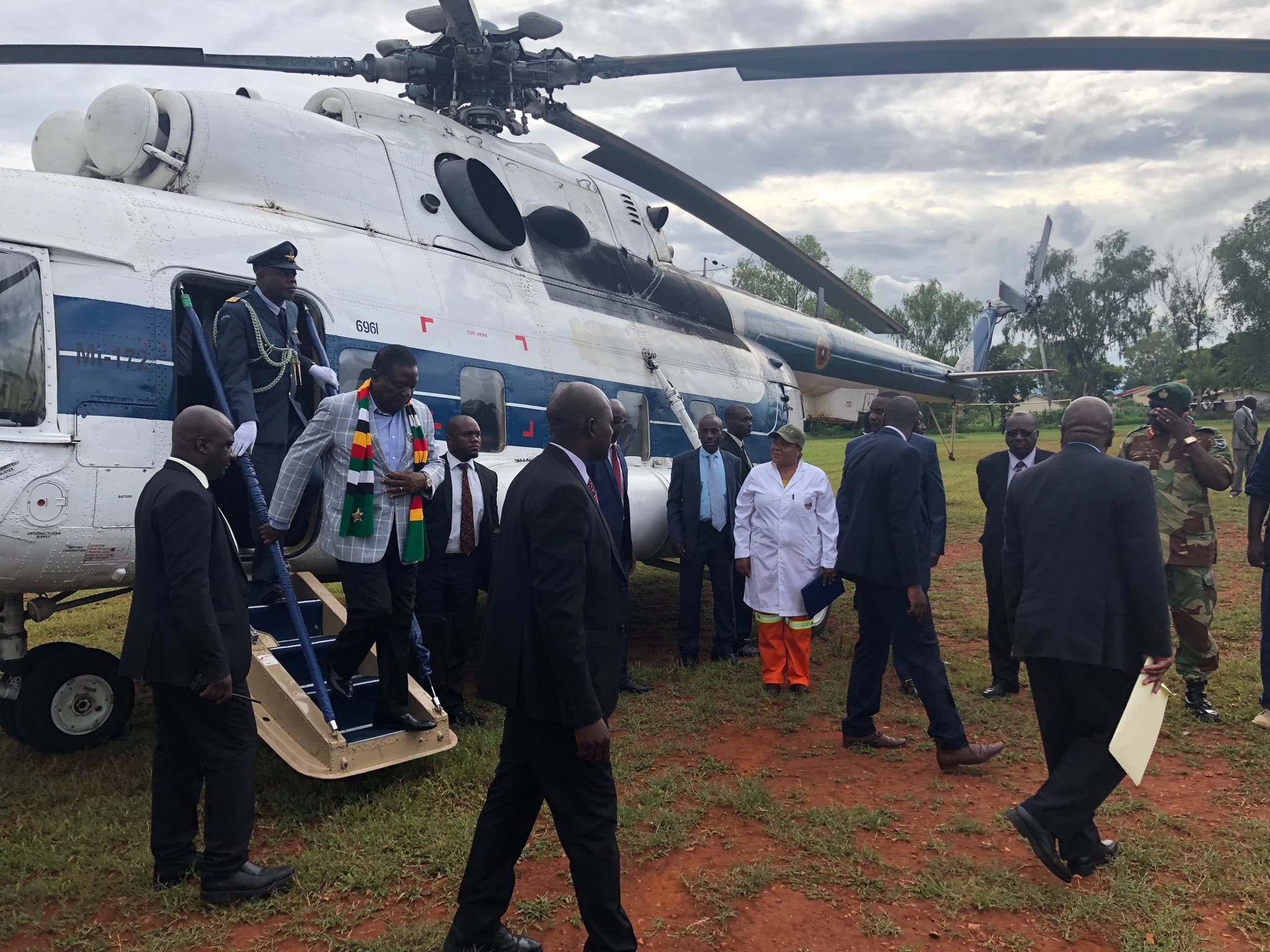 NEW details have emerged that President Emmerson Mnangagwa’s official helicopter crash-landed due to a technical problem triggered by a faulty power system and flat battery, The NewsHawks has learnt.

This comes as Mnangagwa has quickly moved to beef up his motorcade by bringing in Air Force of Zimbabwe signallers to reinforce his communication system whenever he flies out.
In an air force, a signaller, is a person trained to communicate between aircraft, its base and units in the area of operation, by means of radio or other digital communications.

Sources familiar with the incident said following the recent emergency landing at a farm near Sandringham outside Harare, which resulted in a mix up between Mnangagwa’s aides and air traffic controllers at Manyame Airbase, there have been changes on the president’s security system and motorcade.

Preliminary investigations, according to sources, showed that the chopper’s cockpit avionics indicated that the battery was not charging mid-air, prompting the pilot to opt for an emergency landing.

Experts say helicopters have a built-in mechanical control called the collective pitch lever that allows them to descend slowly and land even if the engine dies. This manoeuvre is called autorotation.

“In order to avoid what happened during the incident such as delays in deploying a rescue chopper for the President, changes had to be effected particularly relating to communication,” a source said.

“Last Sunday a motorcade left the President’s farm around 15:30pm, with technicians from Manyame. An air force car is now part of the motorcade, positioned right at its tail end offer communication from the hindmost whenever needed. He flew the chopper, which eventually rescued him when he recently visited the farm.”

Information secretary Nick Mangwana was not reachable for comment at the time of going to print.

Two weeks ago, Mnangagwa’s presidential helicopter was dramatically forced into an emergency landing over 60 kilometres south-west of Harare on a Sunday afternoon due to technical failure. The chopper, which was flying from Mnangagwa’s Kwekwe farm, landed at farm owned by a ministry of Finance official.

Eye witnesses and sources said the crash landing incident happened around 4pm in the Sandringham area, Matsvaire village, in Chegutu district, about 65 kilometres south-west of the capital when Mnangagwa was coming from his Kwekwe farm.

The sources said Mnangagwa, who frequently flies out of Harare to his Precabe Farm in Sherwood, Kwekwe, was rattled and terrified by the incident, which forced him into a scary emergency while on his way back to Harare.

Upon the incident, Mnangagwa’s security details, including an aide-de-camp, marksman from the Presidential Guard, a medic and intelligence officers, scrambled to cordon off the scene, as the team also worked out an emergency rescue plan to complete their 45-minute journey.

The air force, which maintains Mnangagwa’s helicopter and military choppers that escort the President when he flies within the country, has been blighted by aviation accidents in recent years due to bad weather, human error and the use of ageing aircraft.

Its capability was largely decimated during the DRC war from 1998-2002, in which Zimbabwe lost hundreds of millions of dollars, hundreds of soldiers and equipment worth millions of dollars. In a bid to replace the dilapidated equipment, Mnangagwa in April this year reportedly bought a new helicopter despite Zimbabwe’s economic deterioration and growing poverty.

A Russian Antonov AN-124 — the world’s third heaviest gross weight production cargo aircraft — was said to have delivered the chopper to Harare on 15 April, which Mnangagwa plans to use during his 2023 re-election bid.

The Volga Dnepr-operated Antonov flew out of Rzeszów–Jasionka Airport in south-eastern Poland, 10km from the city of Rzeszów, and landed at the Robert Gabriel Mugabe International Airport carrying an Airbus Helicopter H215, an upgraded version of the ageing Eurocopter AS-532UL Cougar which Zimbabwe’s military has been using for VIP transportation.

However, sources insisted that the helicopter Mnangagwa is flying is an old repainted chopper.

Mnangagwa, who has spoken several times about his passion for farming, including in his recently published biography, often leaves his state residence in Harare on Sunday mornings for the farm where he grows several crops and rears livestock.

Earlier this month, he was forced to make a last-minute flight postponement to Mutare, where he was expected to officially open an industrial and medicinal oxygen plant — which he eventually did last week — due to bad weather.-newshawks