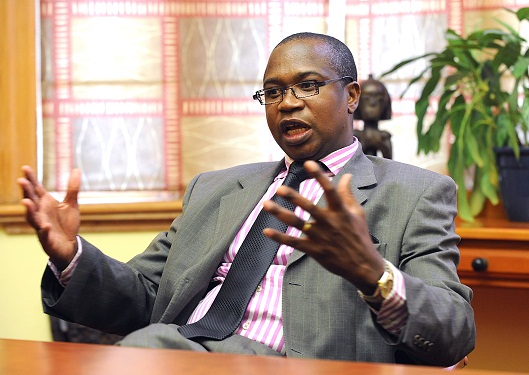 GOVERNMENT allegedly splurged over US$200 000 on Finance minister Mthuli Ncube (pictured)’s accommodation after his lengthy stay at a five-star hotel in the capital before he relocated to a plush home in the capital.

This shocking expenditure of taxpayers’ money comes at a time Zimbabwe is in the throes of a debilitating economic crisis — high cost of living and poor infrastructure.

Since his appointment, Ncube’s crusade at the helm of the Treasury has been marked by policy pronouncements to rein in public expenditure, inflation and currency volatility.

Ncube, who has rolled out a range of austerity measures to contain the intractable economic crisis, allegedly lived at the magnificent Meikles Hotel for over two years where an executive room costs US$200 per night.

He reportedly checked out in June this year.

The Treasury boss, an academic and banker due to his stint at the African Development Bank (AfDB) where he served as deputy president, was appointed minister by President Emmerson Mnangagwa in 2018.

He immediately booked into the splendid facility after flying in from Switzerland. Ncube, who prior to his appointment was working in Switzerland, sources say, frequently shuttles to the European country to visit his family.

Ncube’s alleged two-and-half-year stay at the opulent hotel is not the first such case where a government official has resided at a luxurious hotel, amid government rhetoric on whittling down public expenditure.

Former Vice-President Phelekezela Mphoko also lodged at one of Zimbabwe’s top hotels in the capital for many years.

The hotel bill gobbled a staggering US$619 000 in taxpayers’ money.

Mphoko’s reason for staying at the 5-star hotel was that the house that he was allocated by the government did not match his high office.

Zimbabwe’s cash-strapped government footed Mphoko’s bill. His stay at the hotel ended when he finally moved into a US$2 million mansion built by the government.

Repeated efforts to get a comment from Ncube were fruitless as he did not respond to questions this week.

A senior civil servant yesterday dismissed suggestions that Ncube lived at the Meikles hotel for over two years.

“The honourable minister stayed at the hotel for just three months whilst his house was still being occupied by tenants. As soon as the tenant’s lease was duly terminated, he moved into his personal home,” the source said.

However, a source in the tourism sector told the Independent that; “Ncube stayed at Meikles for a very long time”.

Presidential spokesperson George Charamba was not available for comment at the time of going to print.

With the Covid-19 global pandemic having rattled to the core the tourism and leisure industry, a promotion currently being run by the hotel exclusively for this month shows that the cheapest room per night is going for US$150 while the most expensive is priced at US$200 per night.

Going by the figure of US$200 for a room per night, Ncube’s accommodation bill had by June this year soared to US$168 000.

This excludes food costs at the palatial hotel which prides itself for serving exquisite cuisines.

With Ncube battling to cool off inflationary pressures, one would part ways with a maximum of US$150 per massage session to relax and soothe aching muscles at the high-end property. Spa sessions range from US$50 to US$150.

Other services available at the hotel and which were possibly at the disposal of the Treasury boss include an uninterrupted internet connection, swimming pool, gym and sporting facilities.

The Treasury boss, following the announcement of his midterm budget review statement, intends to contain inflation between 22% and 35% by year end.

In the same statement delivered in August, Ncube also channelled millions of dollars towards the construction of a public hospital that will be reserved for top government officials.

In 2019, the Finance minister introduced a 2% tax on all electronic transfers which was widely criticised by Zimbabweans.

During his tenure at Treasury, Ncube has emphasised the need to stabilise prices, contain the exchange rate and a debt settlement strategy.

Some of the measures he attempted to wring in a bid to curtail runaway public expenditure include flushing out ghost workers, strict monitoring of the allocation and utilisation of vehicles by civil servants.

Across the public sector, civil servants, particularly teachers, nurses and doctors have on numerous occasions embarked on industrial action while clamouring for an upward adjustment of their salaries.

On such occasions, Vice-President Constantino Chiwenga, who has in recent times flown to and from China for medical reasons, has threatened to fire the restive civil servants.

Zimbabwe, cut off from accessing fresh lines of funding from multilateral lenders is saddled with a huge external debt amounting to well over US$11 billion in 2020.

The southern African country, facing a severe economic crisis for the past decade, recently received a US$961 million windfall from the International Monetary Fund’s Special Drawing Rights (SDR) which Ncube said will be used prudently with the bulk of it set to be channelled towards supporting productive sectors of the tanking economy.

It (US$961 million) was disbursed under a multi-billiondollar facility which the international lender extended to member states to cushion them from the devastating effects of Covid-19.