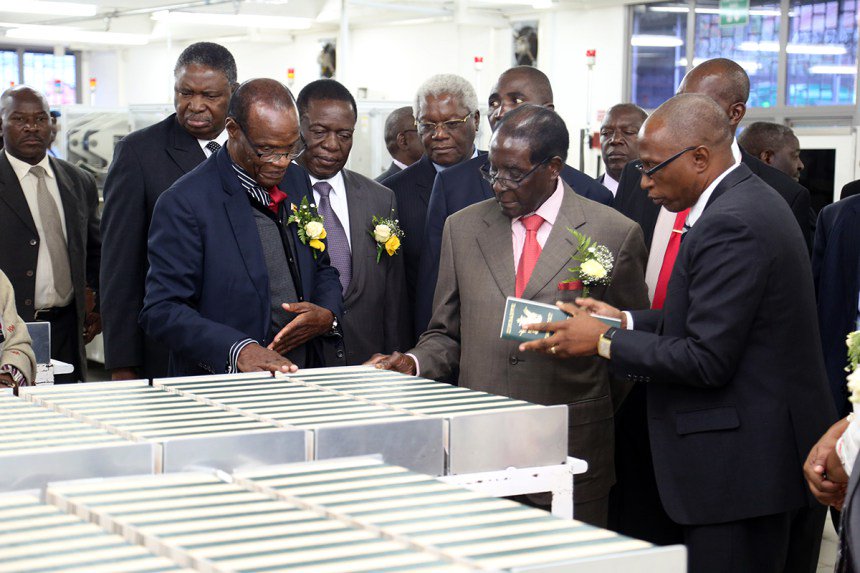 The Registrar-General’s Office has temporarily suspended issuing emergency passports to clear a backlog of over 2 000 passports. President Mugabe is taken through passport production stages by the Registrar-General Tobaiwa Mudede and his the Head of Information Technology Mr Henry Machiri (right) while Vice Presidents Phelekezela Mphoko and Emmerson Mnangagwa and Home Affairs Minister Dr Ignatius Chombo look on after the official opening of the National Passport Production Centre in Harare.

Members of the public who are seeking the emergency travelling documents are forced to apply for the ‘normal’ passport, which costs $53 and is now being released after about two months as a result of the backlog. Normally, the passport is released within three weeks of application.

An emergency passport, which takes 24 hours to be released costs $318, while the one released in three days costs $253. In an interview yesterday, Registrar-General Mr Tobaiwa Mudede said his office was trying to clear the passport backlog, hence the need to temporarily reject new applications for emergency passports.

“We have a backlog of nearly 2 000 passports and that’s a lot,” he said. “We have not suspended issuing passports, there is a backlog that we are trying to clear. This thing is temporary. We don’t force situations.

Mr Mudede said it will not make sense for his office to continue accepting new applicants for emergency passports when his officers were battling to clear the backlog. He said his office did not want to find itself being persecuted publicly for failing to deliver, hence the need to slow down in taking people’s money.

“We must deal with the backlog and finish before we open again for new applications,” said Mr Mudede. “To accept new applications and just park them is not the right thing to do. You wouldn’t like that, you will say ‘no no why have you accepted my money when you cannot deliver’,” he said.

Many people who applied for normal passports, some as far back as May this year, are yet to receive them and this has been blamed on the reduced numbers being processed by the RG’s office. The applicants said they were in the dark as to what had caused the delays given that in the past it was just a three-weeks wait for a normal passport. The Chronicle