Mugabe will only answer to God, says his spiritual Father Mukonori 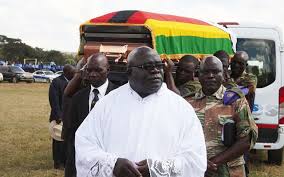 Former president Robert Mugabe’s spiritual advisor Father Fidelis Mukonori has revealed that the late Zanu PF leader complained of a troublesome leg in his last days. Mukonori (FM), who was Mugabe’s confidante since the days of the liberation struggle, told our senior reporter Blessed Mhlanga (BM) in an exclusive interview yesterday that he was in constant touch with Mugabe before his death on Friday at a Singapore hospital.

The cause of the 95-year-old’s death has not been revealed, but President Emmerson Mnangagwa last month said Mugabe had been detained at the hospital since April.

Mukonori spoke about Mugabe’s legacy and disclosed that he once tried to persuade the veteran ruler to apologise for the Gukurahundi atrocities. Below are excerpts from the interview

BM: You were Robert Mugabe’s confidante since the days of the liberation struggle. How did you receive the news of his death?

FM: At 95 I expected anything.

BM: When was the last time you spoke to him and do you have any recollection about his last days?

FM: Well, his voice kept booming right to the end, I knew he was not well. I last spoke to him just a few months ago over the phone.

I spoke to him about three times, his voice was always vibrant, but the last time I spoke to him he was preparing to go for his medical check-up.

Yes, we discussed family issues and how he was doing.

His leg, he had a weak leg. I can’t remember if it was the left or right leg. He seemed to complain about it, but he seemed to be in control judging by his voice.

BM: What should Mugabe be remembered for by Zimbabweans and the world?

FM: President Mugabe will be remembered as Robert, Bob.

His best friends called him Bob all the time and President Mugabe will be known in Zimbabwe as a founding father.
Definitely in 1980 he was the first executive prime minister of a new country, Zimbabwe.

He is remembered for running the race with other colleagues.

He worked tirelessly and he sacrificed his well-being, his life and his education.

He is a man who went into politics when he already had six degrees.

Anyone would not have wanted to waste time with politics, but he forfeited that and decided to use that education to run the race with the rest of the black masses against the Rhodesians of that time, that he will be remembered for, the sacrifices he made.

Worldwide I remember very well in 1978 those who were making comparisons of liberation movements, the Patriotic Front came out as a shining star and Zanla forces as number one. He was the commander-in-chief of the Zanla forces.

BM: Some would say he will be remembered more for his role in the Gukurahundi massacres, which were exposed by the Catholic Church? He never apologised for the killings. Do you think such things ever bothered him?

FM: The exposition was not a new thing to those who were fighting. The Patriotic Front was made of PF Zapu and Zanu PF, Zipra forces and Zanla forces.

If you remember the statement where he said “it was a moment of madness”, I don’t know what you want to call that whether it was an apology or not.

It’s an issue that I discussed with him in person and I discussed the same issue with his vice-president Joshua Nkomo.

It’s an issue, which some people in Zimbabwe would not be in a position to understand and the matrix pertaining to that issue.

People will not know what happened, why it happened.

One death is too many after 70 000 lives were lost in the liberation war. We did not need more bloodshed, not even a drop. I said to both of them, I believed it was essential for the two one day to address the people of Zimbabwe regarding the Gukurahundi issue.

BM: And that never happened.

FM: I left the two of them to discuss and come to an agreement to say should they do it, because I believe the two knew what happened and why it happened and what made that moment of madness to occur.

BM: Zimbabwe has had a history of political violence since independence. Do you think there was any repentance considering what happened in 2008 under Mugabe’s watch?

FM: If you read my book called The Genesis of Violence in Zimbabwe, I go back to 1870.

I am a person who has always looked at peace as peace.

I hate war because war is about destruction, human destruction, and, of course, economic and social destruction.
But I am saying why did Robert Mugabe and Joshua Nkomo not sit down and discuss?

I told them that I believed that it was in the national interest that the two of them one day would address this issue of Gukurahundi.

Remember it was not only the issue of Gukurahundi, it was one of them, but remember there were also some onslaughts in the eastern districts,which were also taking place in Zimbabwe and, of course, we also had avalanches of issues coming from Mozambique.

You have to look at the whole spectrum of what was taking place in the Zimbabwe we were living at the time.

I am not exonerating anybody, but what I am saying is Zimbabwe has been full of bloodshed, yes.

BM: Do these things taint the legacy of the founding father of Zimbabwe?

FM: It taints the legacy of Zimbabwe, as well as you and I.

Maybe you were too young when it happened, but I am also tainted by what happened in the 80s and 70s before you were born.

There is no reason for looking into one side — Robert Mugabe had his responsibility. He has to answer and he will answer that before God.

So will any of his colleagues who went before him or will go after him who participated in the same onslaught of not only Gukurahundi, but even the armed struggle, 70 000 people lost their lives in this country.

BM: After 37 years in power, Mugabe was removed from office and pushed out of Zanu PF. Do you think he died a bitter man?

FM: It’s a good question, which I will ask him in the next life. It’s a subjective question which only he will have to answer.

BM: What do you consider Mugabe’s biggest contributions in building Zimbabwe?

FM: Moving from Rhodesia to Zimbabwe was a serious issue.

Southern Rhodesia was a British colony by conquest, it was not easy to fight against the British people and dislodge them from a place they considered their colony.

Talk to anybody, ask people who went to school from Grade 1 to university level in the 80s and 90s how much they paid.

Ladies and gentlemen who are politicians today, who are technocrats today, who are business people today, do ask how much they paid. Everyone had to go to school.[We have] university graduates who paid absolutely nothing to get degrees, which used to be the privilege of a very few white people.

The sense of dignity of a black person. Well, you were not born then, but I know what it meant to be a kaffir in Rhodesia.

The sense of self-dignity and self-worth of an African, that you can walk tall no matter how short you are, that kind of dignity.

Putting Zimbabwe on the global stage in the United Nations. Robert Mugabe was known not for long talks, but clarity of what it meant being an African, what it meant to be black. What it meant for people coming from the third world.

I am sure friends and foes who are honest enough would know, that when Bob was talking, he spoke sense. That will also be missed.

BM: What do you think Mugabe could have done better during his rule?
FM: That’s a good question, sure when I meet him in the next life I will ask him: Bob, what could you have done better?

BM: What do you think the new government can do to reunite the country in light of divisions that have characterised the post-Mugabe era?

FM: Zanu PF has gone through many facets of history. They should just face facts of life. Facing facts of life, my brother, it means if you want to run a country, look into the face of the person next to you.

What they would wish to have. What I want is what those people want. If I want wealth the next person looking at me, also wants the wealth, you want education, so do they.

You want fuel without having to be in a queue for a month and without wasting hours of productive time in queues, face it and say what are the causes and address those.

That is what all Zimbabweans, including you and I, want.

So what is the new government doing? I am sure they are trying their best, but we don’t need to use superlatives, what is important is get the facts.

They should look at issues and ask: What are we not doing well?

BM: Would you say Zimbabwe lacks leadership or it is lack of ideas to address the problems we face?

FM: We do not know how to use our brains to move forward. Going forward for me is not just about filling my stomach. Any idiot can feel their stomach. Cattle and goats can fill their stomachs, but only a human being can use the brain and use it forcefully and logically with clear objectives in mind for the national good.
How many political parties do we have in Zimbabwe? Some are employing themselves to earn a living through politics and politicking.

BM: You are a writer and have written many books, but are you aware of anyone who has taken up the challenge to document Mugabe’s story?

BM: You will write a book about Mugabe?

FM: Another one sure, soon.