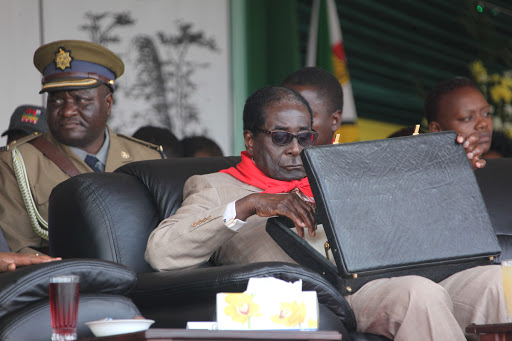 Mugabe’s workers pounced on a locked and sealed briefcase at his rural home in Mashonaland West province, stealing US$1 million cash while he was in the far-flung First World outpost in South East Asia.

According to Newshawks , for Johannes Mapurisa and his cohorts, Mugabe’s death was music to their ears; it did not only make a difference between freedom and jail, but enabled them to secure a “pension” through an audacious cash heist at the late
authoritarian ruler’s rural Kutama village in Zvimba.

After the coup, Mugabe was confined to his Blue Roof mansion in Harare until he left for Singapore for medical attention and recovery.

While he was in the far-flung First World outpost in South East Asia, Mugabe’s workers pounced on a locked and sealed briefcase at his rural home in Mashonaland West province, stealing US$1 million cash.

Before this dramatic change of fortune, the farm workers had survived on barely US$1 a day.

When they stumbled upon the greenbacks, it did not take long for them to stick out like a sore thumb.

The suspects, Constance Mugabe (50), Saymore Nheketwa (47), Andrew Mahumbe (37) and Mapurisa began living beyond their means. They bought expensive personal items, designer clothes and shoes, traversed the village flaunting their newfound fashion and swag, looking out of place in their impoverished locality, while making it easy for fellow villagers and the police to flush them out.

After basking in the glory of their loot and enjoying their nouveau riche lifestyles, things changed, at least for a while: they got arrested for stealing a oncefeared dictator’s money hidden in a poor village.

Many rightly asked: if Mugabe could stash US$1 million in a remote village—the sort of money 99.9% of Zimbabweans usually die without laying their hands on—how much was his net worth and how did he get the
money when he was earning so little and had no known thriving businesses beyond a struggling dairy farm and mainly unproductive landholdings, including the now-collapsing Mazowe empire run by his shopaholic wife
Grace?

By the time of his death, Mugabe had US$10 million in his official local bank account, court documents relating to his family estate later showed.

He had no known expensive properties and the frequently reported billions of dollars, but those close to his family still insist he had a lot of money inherited by Grace and his children.

Court documents later showed that Mugabe had specifically been robbed of US$922 000 by Mapurisa and his accomplices.

This played out before Chinhoyi magistrate Tawengwa Chibanda at the beginning of last year before his death on 6 September 2019. The money had been there for three years—basically forgotten at his dusty rural home.

It emerged in court that Mugabe had in 2016 packed four briefcases with books and took them to where his story, one of the most compelling and gripping life histories, had begun in 1924 when he was born— Kutama.

In packing his briefcases, which he reportedly did personally without Grace’s knowledge, Mugabe had stuffed in the nearly US$1 million for his village retirement, anticipating he would go back to his people and lead a rustic existence in the twilight zone of life.

The money was his village pension package for personal comfort and use with his relatives and community as he reminisced over his history, winding down his largely violent and bloody business on Mother Earth.

But fate had other plans for Mugabe. His own loot was looted. “Mapurisa bought a Toyota Camry… and a house for $20,000 after the incident,” state prosecutor Teveraishe Zinyemba told the Chinhoyi magistrate’s court.

“Saymore Nhetekwa also bought a Honda… and livestock which included pigs and cattle for an undisclosed amount.”

For Nhetekwa, a Mugabe relative, he sadly did not enjoy the money for long as he later committed suicide after failing to live with the shame which is still a village scandal.

Obey Mudimu, a poultry manager at Mugabe’s rural home, said the dramatic windfall had made some of the suspects lead lavish lifestyles in a sea of poverty.

“The last time I checked some of them (the accused) were selling cars and others had bought assets,” he said.

Before his death, Mugabe would frequent his rural home over the weekends where he would reportedly hold meetings in the beautiful African savanna village with his kinsman over various community issues.

His widow, Grace, would usually remain at the family’s Blue Roof mansion in Harare whenever the ex-president travelled to Kutama village where he is buried.

Before his death, Mugabe had shown clearly that he still had fire in his belly at 95, making a last stand in court from Singapore to fight his robbers to get back his money.

In the process, he recovered US$37 000, but then death struck, leaving Mapurisa and his cohorts smiling all the way to the bank as that meant the case would die a natural death—like the old political lion himself— since there would be no complainant anymore to pursue the case.