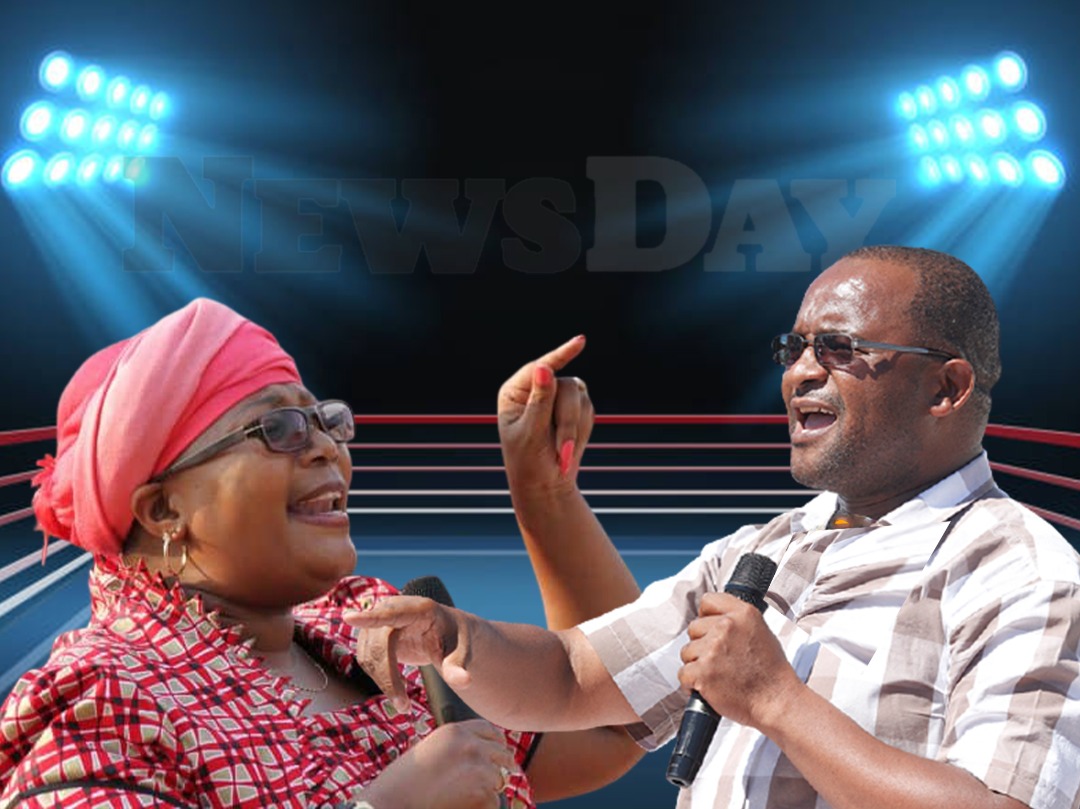 MDC Alliance leader Douglas Mwonzora has recalled MDC-T leader Thokozani Khupe from parliament. This was revealed by Khupe during a press conference held on Wednesday.

Khupe said Mwonzora wrote to Mudenda in January notifying him of his intention to recall Khupe.

Said Khupe, “on the 26th of January 2022, I received a letter from the Speaker of Parliament through a courier, FedEx which was delivered to my house in Bulawayo together with my colleague Nomvula Mguni to the effect that we had been recalled and we were no longer Members of Parliament. I have never heard in the history of Parliament a member being recalled through a letter sent to their home by FedEx at a time when Parliament is not in session.”

Read the full statement below:

On the 21st of January 2022 a Split of the Movement for Democratic Change-Tsvangirai occurred. This was as a result of constitutional transgressions. Douglas Mwonzora has for times without number, violated the constitution of the party whereas Article 9.1.2 (a) enjoins the President to uphold and defend the party constitution. It therefore follows that the President cannot be at the centre of constitutional transgressions. At the same time, Douglas Mwonzora declared that he was now the leader of MDC Alliance party. This is evidence that we now have two parties, MDC T and the MDC Alliance hence the split.

It was in this vein that l then wrote letters to the Speaker of Parliament and the Minister of Justice on the 24th of January 2022 informing both institutions that the MDC-T party had split into two formations, one led by Dr Thokozani Khupe who is also Leader of the Opposition in the National Assembly and the other led by Douglas Mwonzora, Leader of the Opposition in the Senate and President of the MDC Alliance party. I appealed to the Speaker of the National Assembly and the Ministry of Justice, Legal and Parliamentary Affairs to treat both formations equally and exercise impartiality.

However, to my surprise on the 26th of January 2022, I received a letter from the Speaker of Parliament through a courier, FedEx which was delivered to my house in Bulawayo together with my colleague Nomvula Mguni to the effect that we had been recalled and we were no longer Members of Parliament. I have never heard in the history of Parliament a member being recalled through a letter sent to their home by FedEx at a time when Parliament is not in session.

Parliament will be resuming in a fortnight and you shudder to think why the Speaker of Parliament was in such a hurry to recall me by a letter he wrote whilst sitting in his office and sending it through FedEx. That is unprocedural. My understanding of Parliamentary operations, is that the Speaker derives his powers from the mace when he is sitting on his chair in the House of Assembly and in the presence of seating Members of Parliament because the mace is the symbol of authority of the House and the Speaker. Without the mace the House cannot sit and pass laws.

On the 24th of January 2022, the Speaker of Parliament received two letters, one from my party and another from Mwonzora’s party. He then decided to ignore my party’s letter and took immediate action on Mwonzora’s party letter of which he subsequently wrote recall letters to us. My letter was reconciliatory because I was pleading with the Speaker of Parliament to exercise impartiality and treat the two parties fairly whereas Mwonzora’s letter was vindictive because he was asking the Speaker of Parliament to recall Nomvula Mguni and myself. Douglas Mwonzora is now President of MDC-Alliance party whereas Honourable Mguni and myself are members of the MDC-T party. It boggles the mind how a leader of another political party can recall members of another party. For example, MDC-T party cannot recall members of PDP neither can they recall members of ZANU-PF.

To make matters worse the Speaker of Parliament in the recall letters he said, I quote, “I must advise that on the 24th of January 2022, I received a notice of recall in terms of section 129 (1) (k) of the Constitution. Accordingly I must advise that by virtue of Section 129 (1) (k) of the constitution you have seized to be a member of the National Assembly.” My question is which party because the Speaker did not mention the name of the party which gave him those notices.

Previously there are members of Parliament who were recalled because they were accused of being members of MDC-Alliance party. On the country Mwonzora made a public announcement to the effect that he has now formed a new party that is contesting the upcoming by-elections in March under the MDC Alliance banner, whereas this is the reason why other MPs were recalled, it was precisely because they belonged to the MDC Alliance and not MDC-T. Hence the reason why he has expelled himself from the party in terms of the MDC-T constitution, Article 5.10 (a).

Therefore, Douglas Mwonzora has no locus standi of recalling a member of the MDC-T because he is now a member and the leader of the MDC- Alliance. This clearly demonstrates the bias, impartiality and inconsistence by the Speaker of Parliament.

Splits in the Movement for Democratic Change are not a new phenomena. The first split happened in 2005 between the late Gibson Sibanda, Deputy President and the late Morgan Tsvangirai, the President.

Parliament recognized and respected both formations and accepted the status quo. Both formations were allowed to co-exist and they co-existed until the end of their term of office in 2008.

This is where my issue of victimization and discrimination is derived from.

Two men split in 2005 and they were allowed to co-exist by this same institution.

A woman and a man have split in 2022 that is Thokozani Khupe and Douglas Mwonzora. The Speaker of Parliament then decides to favour Douglas Mwonzora over me without even considering calling both parties to the table for a discussion. Truly speaking this is glaring evidence of inequality, discrimination and victimisation.

There is no provision in the Standing Rules and Orders where the Speaker of Parliament is supposed to supervise political parties and adjudicate when they have a dispute.

The Speaker of Parliament in this instance received two letters on the same day and almost at the same time, but alas he decided on which formation was legitimate, l wonder where he got those powers from.

The Speaker of Parliament in his wisdom disregarded that and decided to take sides with another man. As a woman, I strongly feel victimised and discriminated against at the highest level.

As if that was not enough, the Minister of Justice equally decided that the Political Parties Grant will go to Mwonzora. Again, l wonder where the Minister of Justice derives his powers from to decide on which formation is legitimate as l also wrote a letter to him advising him on the new developments in the party and pleaded with him to treat both formations in a fair and just manner.

In 2014, the MDC-T split again and this time it was between the late Morgan Tsvangirai, President and Tendai Biti, the Secretary General. Political Parties funds were split between the two formations.

In 2022, the same MDC-T party has split between Thokozani Khupe, Deputy President and Douglas Mwonzora, President but the sad reality is that the Minister of Justice wants to give the full amount to Mwonzora and one shudders to think why.

When it was Morgan Tsvangirai and Tendai Biti the money was divided into two but this time around because it is Thokozani Khupe, a woman and Mwonzora, a man, the Minister of Justice wants the full amount to go to Mwonzora. Surely what can one call this other than seeing it as an unjustified inequality and an unfair practice.

In these two instances l have been discriminated against because I am a Woman.

This time around it is Thokozani Khupe and Douglas Mwonzora and both the Speaker of Parliament and the Minister of Justice have decided to side with another man, Mwonzora for no apparent reason.

In my view, these institutions, namely the Executive and the Legislature are not exercising impartiality and colluding against me with regards to this matter.

As women in the political arena in this country we have been victimised and discriminated against for times without number and time has come for women to rise and say this far and no further. Our voices are being silenced and we are being disempowered.

I met with Women’s Organisations to tell them our story of victimisation and discrimination just because of our gender. I am being suffocated and I Can’t Breathe.

At the same time, l have written to the United Nations Secretary General H.E. Antonio Guterres, the UN Women Executive Director Dr. Sima Sami Bahous, the United Nations High Commissioner for Human Rights H.E Michelle Bachelet, the Inter Parliamentary Union President Honourable Duarte Pacheco, the Pan-African Parliament and Madam Bineta Diop, Special Envoy of the Chairperson of the African Union Commission on Women, Peace and Security so that they see the amount of victimisation and discrimination against women by the Executive and the Legislature.

I am therefore calling upon the Executive to Stop discrimination against women. By the same token, l am calling upon the legislature to Stop discrimination against women. I am saying this with a heart which is bleeding because I am a victim of discrimination by these pillars of the State. Women and men must be treated with dignity, respect and equality because we are all equal in the eyes of the Lord, therefore we must all be equal in the eyes of the Law.

I rest my case.