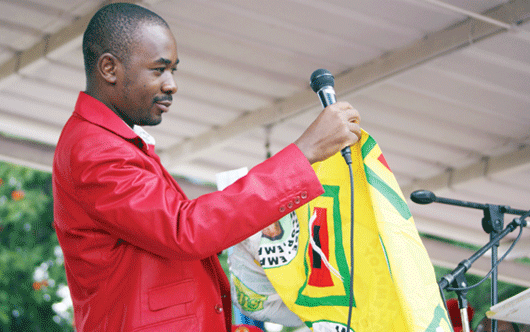 Addressing the people at an urgent press conference at Bronte Hotel, Chamisa unveiled the name for his new party and also announced the road map for the by-elections.

He said, his new party is now called ‘Citizen Coalition For Change’ (CCC). Chamisa also dumped the color red and chose gold and yellow as his new party colors.

Meanwhile, earlier today, Chamisa hinted that ‘the baby is about to be born’ referring to his new party name. He said that this was not a rebirth but rather a new birth.

BABY GIRL OR BABY BOY?
The baby is about to be born.
And the parents are the citizens.
And the village witches want to steal and or kill this baby.
It’s a new birth not a rebirth.
And the name is…..… It’s a new day! pic.twitter.com/1mxxFKRbTD

The rebranding comes just a couple of months after Nelson Chamisa sparked a debate on social media when he hinted at new party colors.

Taking to Twitter, Nelson Chamisa posted a picture whilst holding three umbrellas with different colors. Captioning the picture, he wrote;

“Colour is a language! Colour lights up the environment and illuminates the atmosphere. The future is exciting. We must be different. But which colour is the future? Green, Red, Blue,Orange, White or Yellow??”

Colour is a language! Colour lights up the environment and illuminates the atmosphere. The future is exciting. We must be different. But which colour is the future? Green, Red, Blue,Orange, White or Yellow?? pic.twitter.com/ekC4B9pPZb

His post sparked mixed reactions, as some welcomed the idea and even suggested the color they thought would best represent and suit the party. However, some were a bit skeptical as they believed there was no need to change the MDC Alliance party colors or the party name.