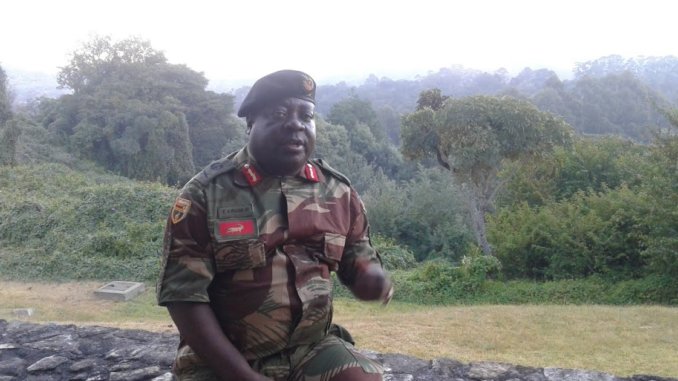 PRESIDENT Emmerson Mnangagwa and Vice-President Constantino Chiwenga are on a new collision course over the appointment of the next Zimbabwe National Army (ZNA) commander, with retired Lieutenant-General Engelbert Rugeje at the centre of the row and renewed power struggle.
By Owen Gagare

The ZNA top post is vacant following the death of Lieutenant-General Edzai Chimonyo who succumbed to a heart ailment on 8 July.

Military sources told The NewsHawks this week that the issue is looming large in the corridors of power amid resurgent infighting between the two leaders.

“This is a big issue because the President and his deputy have different political agendas on who should replace Chimonyo,” a military source said.

“The President is still searching among the serving and retired senior commanders for the most suitable candidate, while his deputy is dead set on ensuring Rugeje gets the job. Although it is the commander-in-chief who has the final say, the process is consultative, hence clashing designs and manoeuvres.

“The new commander is supposed to have been appointed by the time Zimbabwe commemorates Heroes and Defences Forces holidays on 9 August and 10 August respectively. It’s raising tensions between them because it is a critical appointment with implications for power dynamics and how the unresolved leadership issue between them will be settled.”

Mnangagwa has three weeks to find a replacement for Chimonyo.

“There is a board or consultation team which includes the minister of Defence (Oppah Muchinguri-Kashiri), the permanent secretary (Mark Gray Marongwe), the immediate past CDF (Commander Defence Forces, Chiwenga) and the current CDF (Lieutenant-General Phillip Valerio Sibanda,” another source said.

“They are currently having consultations before they make a recommendation to the President. Rugeje is the favourite – he has the right qualifications, experience and support within the military, but the problem is politics. Mnangagwa doesn’t want him.”

Rugeje was part of Chiwenga’s core military team which put Mnangagwa to power through the coup against the late former president Robert Mugabe.

As part of their November 2017 coup deal, Rugeje, who is Chiwenga’s ally, was supposed to be appointed ZNA commander following the promotion of Sibanda to command ZDF.

However, Chiwenga first wanted Rugeje, now his trusted lieutenant, to go to Zanu PF to take control of the party machinery and structures ahead of the 2018 elections.

Mnangagwa did not want that. So he tried to outmanoeuvre Chiwenga, who was firmly in charge at the time, by appointing senior war veterans leader Victor Matematanda whom the military rejected.

Rugeje went on to become Zanu PF national commissar. He presided over the party’s 2018 election campaign but found himself in clashes with Mnangagwa’s staunch loyalists like Chris Mutsvangwa who was then-presidential adviser.

Mutsvangwa said Rugeje was inexperienced and pushing a military factional agenda after he had lost Zanu PF primaries in Norton before coming back through the back door in a re-run after his rival withdrew, only to be defeated by independent candidate Themba Mliswa in the main poll in July 2018.

Mutsvangwa, whom the army succeeded in removing from office, had also warned that Mnangagwa could lose if people like Rugeje remained in charge of the elections.

In the midst of the suspicions and tensions, Mnangagwa complained at the time that there was an impeachment plot against him. This suggested an intensification of the infighting and renewed political brinksmaship.

About a year after the election, in June 2019, Mnangagwa – in a push back against Chiwenga – removed Rugeje as commissar and put Matematanda as he initially wanted.

Matemadanda remained in the position amid bungling, while also being deputy Defence minister until recently when was appointed ambassador to Mozambique.

Rugeje had been removed with a promise that he would be deployed to head the Zimbabwe National Defence University, but Mnangagwa left him in the lurch.

So after putting his head on the block with others to get Mnangagwa in, Rugeje was basically thrown out.

But Chiwenga still wants Rugeje, who is a relatively respected and experienced commander, to be appointed the next ZNA chief.

Senior military officers, however, say Rugeje’s position has been weakened by the fact that he retired from the military after the coup. He would be shoo-in if he had remained and was not retired.

“Mnangagwa does not want Rugeje, whom he knows to be one of Chiwenga’s strongest and fearless allies. That’s why he removed him from heading the Zanu PF commissariat after the 2018 polls. He didn’t want him there in the first place,” a source said.

“But Chiwenga wants Rugeje to take over, hence the collision course.”

Mnangagwa’s tensions with Rugeje exploded during a Zanu PF politburo meeting on 29 July 2020. The monthly meeting was held on a Wednesday at party headquarters commencing 10am.

It came just two days before the 31 July 2020 protests. Mnangagwa feared an uprising by the opposition and Zanu PF internal rivals. This was similar to events in January 2019 during unrest that left a trail of death and destruction.

In an unprecedented move, Mnangagwa had brought in Central Intelligence Organisation director-general Isaac Moyo to present a report to the effect that some senior party officials were working with the opposition and civil society activists to organise an anti-government revolt.

“Although Chiwenga was strategically absolved of any wrongdoing, it was said the so-called traitors were acting in his name. As a result, the 342nd session of the politburo suspended its secretary for Health Cde Cleveria Chizema after Lovemore Matuke, head of the security department, presented Moyo’s report on how internal forces were working with opposition activists to subvert Mnangagwa’s leadership.”

However, during the ensuing heated debate Rugeje reminded Mnangagwa how he had come to power and how Chiwenga and others like him had put their heads on the block for him.

He also reminded Mnangagwa that he has offices – Munhumutapa Building, State House and Zanu PF headquarters – not his farm where people always gathered for unofficial meetings and plotting.

That was enough to ruffle Mnangagwa’s feathers and widen the rift between them.

Rugeje was central in the coup against Mugabe.

He was, however, retired from the military alongside Chiwenga, who was the ZDF commander, the late Perrance Shiri, then Air Force commander and Sibusiso Moyo, former ZDF chief-of-staff.

Military sources said this was within the context of the broader coup deal, which entailed Mnangagwa serving until 2023 before handing over the reins of power to Chiwenga.

Sibanda would also become vice-president on the Zapu ticket, replacing Kembo Mohadi at that stage, while Rugeje would bounce back as, first, ZNA commander and then CDF boss.

Mohadi resigned as vice-president amid a sex scandal early this year, but remains party co-deputy leader. He is currently going around the country mobilising structures.

But no sooner had Mnangagwa gotten into office than the deal began unravelling as he launched an independent path forward and a ruthless power consolidation bid, resulting in a fallout and tensions within the coup coalition.

Mnangagwa is currently on a power consolidation drive to ensure re-election in 2023, although Chiwenga and his military faction hope to stop him during next year’s elective party congress.

The immediate point of conflict after the coup was the appointment of Muchinguri-Kashiri and Mohadi as vice-presidents.

The Muchinguri-Kashiri appointment was resisted by an angry Chiwenga who pressured Mnangagwa to appoint him vice-president instead.

Mnangagwa beat a hasty retreat and abandoned the Muchinguri-Kashiri deal and brought in Chiwenga on board with unprecedented powers, also in charge of defence and war veterans ministries.

Mohadi had initially been given those portfolios, including security.

But Mnangagwa did not rest: he continued to push his agenda and, much to Chiwenga’s shock, the President and his supporters immediately started playing the long game to prolong his stay in power beyond 2023 as early as December 2018 during the ruling party’s Esigodini annual conference.

Mnangagwa later started purging police, intelligence and then army structures to realign them to his power matrix.

Key military commanders who played a critical role during the coup, including Presidential Guard commander retired Major-General Anselem Sanyatwe, were retired and sent on diplomatic service.

This mostly happened when he was ill and away in China.

After Shiri’s death in July last year, Chiwenga and his faction pushed for his replacement with a person who has a security background, but Mnangagwa appointed an ally from Masvingo, Anxious Masuka to take over.

One of Mnangagwa’s key strategies has been to mainly appoint his ethnic Karanga homeboys, mostly from the Midlands and Masvingo provinces, into key positions as part of the power consolidation agenda, hence brazen political clansmaship in his rule.

Ethnic politics, cronyism and patronage are deeply embedded in Zimbabwean politics. That, together with leadership, policy and governance failures, ruined the country.

This is widely seen as a continuation of Mugabe’s ethnic and regional politics – politicisation and weaponisation of ethnicity for political ends.

Mugabe mainly appointed his ethnic Zezuru cronies into key positions throughout his 37 years in power.

This was the main reason for the Tsholotsho Agenda of 2004 to rotate leadership among various ethnic and sub-ethnic groups to break the current mould. – News Hawks