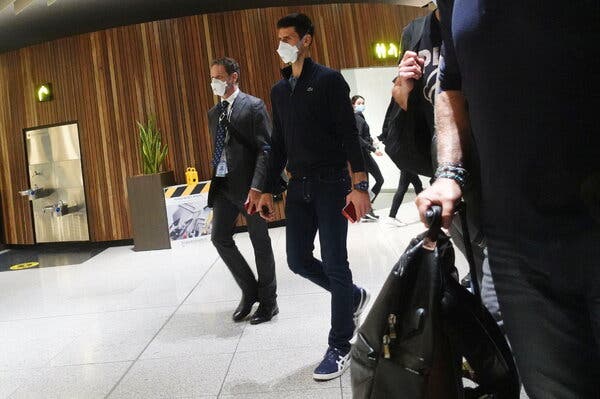 The unvaccinated tennis star said he was “extremely disappointed” but would respect a court’s ruling. He departed on a flight to Dubai from Melbourne Airport on Sunday night.Published Jan. 15, 2022Updated Jan. 16, 2022, 2:28 p.m. ET

Novak Djokovic’s last-ditch attempt to salvage his hopes of defending his Australian Open title has failed, with judges ruling on Sunday that Australia’s immigration minister was within his rights to cancel the unvaccinated tennis star’s visa for a second time on the basis that the player could pose a risk to public health and order.

The judges’ decision cannot be appealed.

Djokovic said in an emailed statement that he was “extremely disappointed” but that he respected the ruling. He said he would “cooperate with the relevant authorities in relation to my departure from the country.”

Djokovic’s legal team had argued in court on Sunday that the immigration minister, Alex Hawke, had erred by canceling Djokovic’s visa on the grounds that he could encourage anti-vaccination sentiment in Australia. Hawke had not considered whether deporting Djokovic could also stoke such sentiment, Djokovic’s lawyers argued.

But a panel of three federal judges rejected that argument and sided with the government. A lawyer for Hawke argued Sunday that Djokovic’s team could not possibly prove that the immigration minister had failed to consider the consequences of his decision.

Chief Justice James Allsop did not give reasons for the judges’ decision, saying that they would be provided on Monday at the earliest. The decision was unanimous, he said at a hearing on Sunday afternoon. He added that Mr. Djokovic must pay the government’s legal fees.

He said the ruling was not a reflection on the validity of Hawke’s decision to cancel Djokovic’s visa on Friday — only on the merits of his decision-making process.

Djokovic arrived on Sunday night at Melbourne Airport, where he boarded an Emirates flight bound for Dubai. He could be barred from entering Australia for the next three years under its laws regarding visa cancellations, but the government could waive that.

Prime Minister Scott Morrison said in a statement that he welcomed the decision “to keep our borders strong and keep Australians safe,” adding that “Australians have made many sacrifices during this pandemic, and they rightly expect the result of those sacrifices to be protected.”

In Djokovic’s native Serbia, President Aleksandar Vucic said that he had spoken to the player and offered his support. “I told him that I can’t wait for him to come to Serbia and return to his country, and to be where he is always welcome,” Mr. Vucic said in a statement.

The dispute ran up against the Monday start of the Australian Open, a Grand Slam championship event that is one of the biggest tournaments of the year in tennis along with the French Open, Wimbledon and the U.S. Open.

In addition to chasing his 10th Australian Open men’s singles title, Djokovic had been hoping to break a tie with Rafael Nadal and Roger Federer for the most Grand Slam championships in tennis history. They each have 20.

“I am uncomfortable that the focus of the past weeks has been on me, and I hope that we can all now focus on the game and tournament I love,” Djokovic said in his statement. “I would like to wish the players, tournament officials, staff, volunteers and fans all the best for the tournament.”

The ATP Tour said in a statement that more time was required “to take stock of the facts and to take the learnings from this situation.”

“Ultimately, decisions of legal authorities regarding matters of public health must be respected,” the group’s statement said, adding that “Novak is one of our sport’s greatest champions, and his absence from the Australian Open is a loss for the game.”