Panashe Muzambe: From childhood in Zimbabwe to the Scotland rugby team 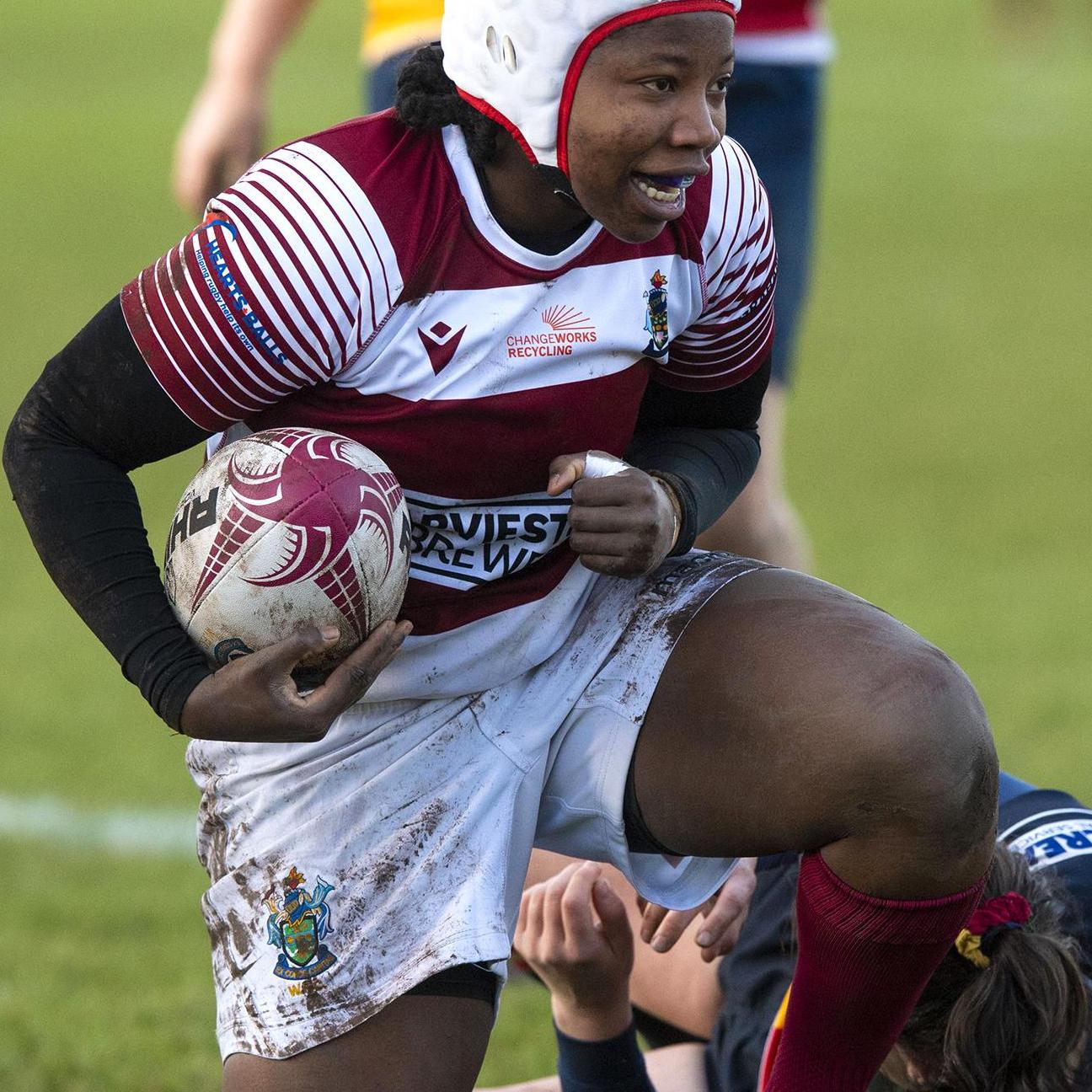 Panashe Muzambe tells her incredible story from a Zimbabwe girl to the first black woman to play rugby for Scotland.

“I remember crossing the whitewash and just looking up to the heavens and thanking God… then I went in for a scrum.”

Panashe Muzambe chokes back the tears at the memory of sitting in a hotel lobby the day before her Scotland debut. She stumbles at recalling the surprise, the overwhelming emotion, but most of all, she vividly recites the phone call to her father, letting him know his little girl from Zimbabwe was set to represent her adopted nation at rugby.

The 24-year-old’s story is a powerful tale of courage, determination and love. Courage to live without her mother in Africa for five years before an emotional reunion at Gatwick Airport ahead of their new life in Scotland. Determination to do all she can to make her family in both countries proud, and love for a game she didn’t play until she was a teenager. Oh, and for Serena Williams.

Muzambe – who starts on the bench in the Women’s Six Nations opener away to England on Saturday, where she could earn her seventh cap – tells BBC Scotland her story.

I was born and raised in Zimbabwe because my mother moved here. First I was brought up by my aunties and uncles while my dad was working, so a lot of my extended family played a massive role in my upbringing, and that’s very common for us. We joke about how family for the black communities is everyone, so anyone’s auntie or uncle.

Then at 12 me, my father and brother got the opportunity to comes across to Scotland, and we had a nice family reunion at Gatwick airport. I can remember it vividly, it was March and it was a little bit cold. I say a little bit I mean very cold!

It was very challenging, but we needed to embrace that because mum was doing the best for us. It meant I could go to school, it meant we had food on the table, it meant a lot of things.

When I was at Napier University they were starting a new rugby team and I literally rocked up at where they were doing a try session with a pair of trainers. But from that day I was hooked. We played a lot of tennis in Zimbabwe. So the girls would play tennis throughout the term and, for me, it was Serena who stood out because not only did she look like me, you know, but she was so powerful. And I just wanted to emulate the smallest amount of strength that she showed on the court.

But my rugby coach at Napier, who was playing for Scotland, spoke to me and was like “Nashe, I think you could do something”. Because I didn’t know rugby that much, I didn’t actually know if I was good at all. I just felt like I was there having a kickabout every Wednesday. It was extra motivation to take a second look at myself.https://emp.bbc.co.uk/emp/SMPj/2.40.2/iframe.htmlPanashe Muzambe recalls ‘a mob’ coming to watch her in South Africa

Eventually a call to be part of the Scotland fold followed for Muzambe, an invitation coming to be the 24th/25th player in Spain.

Being a reserve was a big deal. One of the first things I did was write “Six Nations” in my diary and that I’m coming for you.

From January we had Six Nations games after that and I travelled to France as well. And I think that’s when it was like “Okay, this could be happening this year”.

After being part of a small number of squads, Muzambe was called into the matchday pool for the final match of the 2019 Women’s Six Nations against England in London.

I arrived at the hotel and and one of my good friends congratulated me. I thought “What is she talking about?”. Nobody really says congratulations for coming in as a reserve and she was like “‘Nashe, you’re on the bench”.

I had to excuse myself because I genuinely did not know how to deal with the emotions and I went and sat in the lobby of the hotel. I called my dad. He said: ‘That’s amazing, I’m so proud,’ and just hearing my dad saying that was important because our parents wouldn’t really show us those emotions. My dad couldn’t make it but I said I’d enjoy the moment for the both of us.

It was pretty nervy during the game. Ten minutes to go, then 80 gone. I was thinking it wasn’t going to happen, then I got called up to get subbed on and then told to go sit back down. You can’t write this stuff! I eventually remember crossing the whitewash and just looking up to the heavens and just thanking God… then I went in for a scrum!”

Muzambe’s second cap was just as special but in a very different way. Part of the women’s squad on their first ever tour, she travelled to South Africa, allowing members of her family from her homeland to see her in action.

My family here couldn’t make it to South Africa. However, I had the best reunion with some of my extended family. My uncle came to the first game on his own. I introduced him to a lot of the girls.

So we played another game and he brought the whole village with him. I think he rounded up every single person who lived in Cape Town. After the game I was mobbed by people and little kids.

Being a role model & racism

Muzambe recognises the significance of her role as a black sportswoman in Scotland. She insists it’s not about her or her achievements, but providing hope for what comes next.

I’ve been quite fortunate that within my sporting career I’ve not been subjected to any direct racism.

Sometimes there is the subtle kind of racism that takes place. But I remember coming from training once and just going off to a local supermarket. All of a sudden a security guy is following me through every single aisle. You’re just thinking: “What is it that that gives you the audacity to think that I’m not going to be able to pay for my milk and bread?”.

In terms of rugby, this is bigger than me. I’m just going to try to get a few more caps, because the longer I can stay in the game, the more visible I am to not just black and brown kids around the country, but any kid who has felt like they are marginalized within society.

I may have been the first black woman to play for Scotland, but it’s my job to make sure I’m not the last.

Panashe Muzambe was speaking on the Chris Iwelumo Meets… podcast. You can listen & subscribe on BBC Sounds.