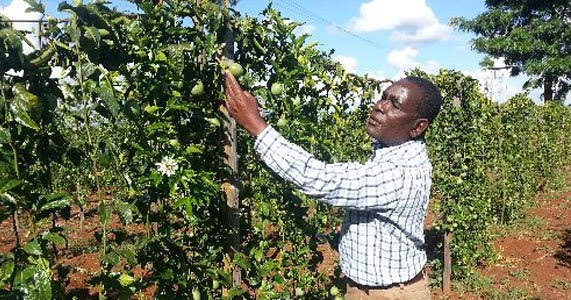 KWEKWE District, in the Midlands Province, is a renowned maize and wheat farming belt but a man has embarked on a journey to avoid the region’s traditional cash crops for passion fruit.

Engineer Sam Gomba is now one of the key passion fruit farmers in Kwekwe.

He graduated with a Bachelor of Technology, Mechanical and Production Engineering from the University of Zimbabwe in 1992 but saw it wise to diversify into farming.

Eng Gomba’s pilot project has been a success according to Mr Anglistone Sibanda, the chief executive officer of Green Afrique Technologies.

Green Afrique Technologies is an agricultural, marketing and research firm that is actively marketing passion fruit in the country.

Better known as granadilla, passion fruit is a highly nutritious tropical plant that traces its origins to South America. It is a rich source of powerful antioxidants and has various health benefits.

“For over 15 years I have been on this piece of land and have been doing horticulture.

I grow tomatoes, green pepper, cabbages, carrots among other products which we sell in and around Kwekwe in supermarkets and to individuals,” he said.

Eng Gomba said before the advent of Covid-19, horticulture was paying a lot in a development that saw him build a house at his farm, buying tractors among other movable properties and sending his children through tertiary education.

He has invested in a number of green houses at the farm as well.

He said the advent of the Covid-19 induced lock downs resulted in more people venturing into farming to make ends meet as many businesses were shut down due to the mechanisms put in place to mitigate against the spread of the pandemic.

That gave many people an opportunity to venture into farming and as a result, everyone now is a farmer. Everyone has broilers or road runners.

That has resulted in an influx of farm produce and subsequent fall in prices.

So we are no longer making as much profit as we used to make before Covid-19,” said Eng Gomba.

The father of three said he fell in love with growing the fruits after learning of its high returns on the internet.

He travelled to South Africa last year and brought 70 plants of passion fruit.

“As I said, after realising that everyone was now a farmer and returns were becoming low, I turned to the internet to see what others were doing to make money from the land.

I fell in love with the passion fruit and I went to South Africa to find out more about the crop where I brought 70 plants.

I now have an acre of the fruit,” he said.

To indicate that his plants have been a success and doing well under the weather conditions characterising Kwekwe – he started picking fruits at five months.

Chronicle recently visited Eng Gomba’s farm where the fruits have been planted in rows with short strong poles supporting them from the ground while their sprawling vines are looped around some wires to keep their fruits off the ground.

He said the fruits should hang so that they have sunlight to grow into perfect and quality products.

“They said one starts picking the fruit after seven months but I started picking mine at five months,” he said.

“This is just an experiment which according to Green Afrique Technologies has surpassed many expectations.

So we have started clearing land to put 10 hectares under passion fruit this season.

Next year we clear more land at this farm in Musungwe block and Green Afrique Technologies has agreed to partner me in the new venture.”

Eng Gomba, a board member at the Agricultural and Rural Development Authority for two terms between 2012 and 2020, grows the purple fruit variety.

The fruits are planted two metres apart in rows that are three metres apart while nets which support the tendrils are sitting on poles made from trees that are locally available.

Once the fruit is planted, the vines grow rapidly and the crop begins flowering after about six months.

Eng Gomba has also made a bee hive to attract bees for flowering the plants.

“I have four boreholes at the farm which will work well for the passion fruits since the flowering stage requires a lot of water, failure of which you may end up with poor fruits that don’t meet the market standards,” he said.

Eng Gomba has 16 employees at his farm and plans to employ more and introduce the fruit to his rural home in Gokwe.

“I can’t be an engineer just to make money to feed my family.

After all, two of my girls are now married and we are left with one son who is studying Agriculture in Kenya.

So it means the knowledge and expertise I will get from this should cascade to the villagers so that they grow crops that give them money,” he said.

“So I want to introduce the crop to villagers in Gokwe so that they diversify their farming instead of relying on maize or cotton that doesn’t give them that much return each year.”

Mr Sibanda said there is a big potential for small scale farmers to meet the huge export demand for passion fruit.

“The secret is being able to work together.

Pooling resources, we have the capacity to overtake Kenya and become the number one producer and exporter of passion fruit We capacitate farmers with inputs such as seedlings for the variety that is on demand, we train them and provide agronomic technical support so that what they produce meets the export standards.

We then buy the fruits from the farmers and export to the EU and UAE markets,” he said.

Why should you consider passion fruit farming?

Passion fruit is highly lucrative, giving farmers a good regular income. It grows in various climatic zones, from the highlands to lowlands.

There is a high demand for the passion fruit, both in the local market and for export.

The United Kingdom is the largest importer of the Kenyan passion fruit, followed by The Netherlands, France, the United Arab Emirates, Germany, and Belgium.-Chronicle