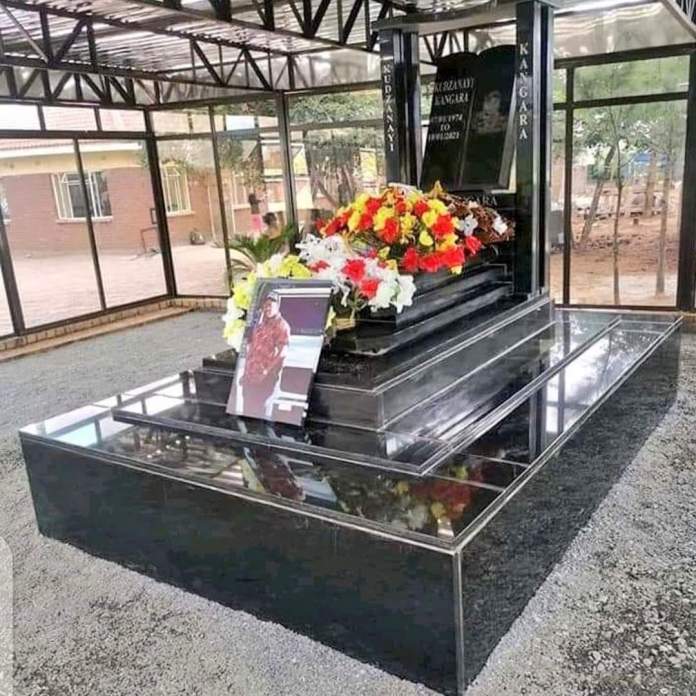 Stunning images of the grave of Kudzanayi Kangara ( Popularly known as Boss Kangara) who died from Coronavirus in January, have taken social media by storm .

According to H -Metro, the grave has beautiful paving, tiling with the inscription on his tombstone, Kudzanayi Kangara, died on 10 January 2021. and is covered with shiny glass all round. He was born on 7 January 1974.

He was buried in his rural home in Shamva, lived a life of glitz and glamour in the town’s Aerodrome suburb.

Even in death, the casket demonstrated that a person of means was departing, and a couple of US dollars had to be buried with him, probably to give him a soft landing to the world yonder.

We might not have seen the type and quality of food he ate, but on the evidence of his houses, vehicles, generosity and even number of wives he had— three official ones and several unofficial, Boss Kangara, as he was better known by those around him, clearly did not lack anything on earth, possibly from the time he established himself in the gold business.

You couldn’t talk about gold in Bindura without his name mentioned.

Boss Kangara started buying and selling Gold after he lost his job at a mine where worked as an electrician.

In his early life, he worked as a temporary teacher. After he found success, he also became a music promoter.

Among Kangara ‘s possessions were top of the range sports cars and mansions.