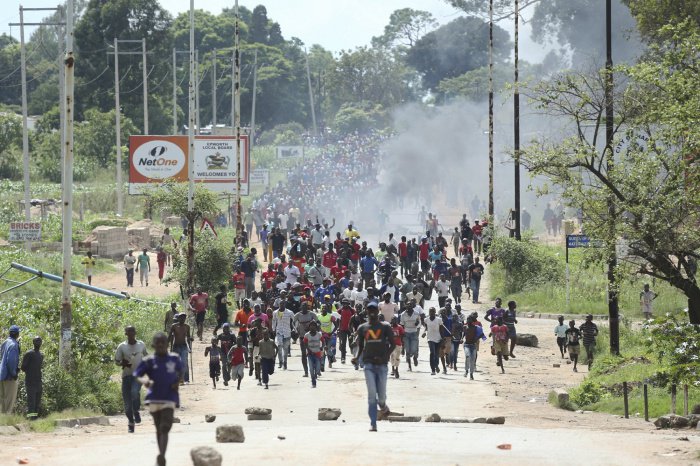 Zimbabwean police on Monday fired tear gas in suburbs of the capital an attempt to disperse angry demonstrators who burned tires and threw stones to protest fuel price hikes.

Protesters were undeterred, blocking some roads in Harare after the government’s weekend decision to more than double the price of gasoline. Children in school uniform joined the protests as Zimbabwe is in its worst economic crisis in a decade.

Police also fired tear gas at dozens of protesters in downtown Bulawayo, Zimbabwe’s second-largest city, witnesses said. The city is a center of opposition to the government.

Many people in the streets directed their anger at President Emmerson Mnangagwa, who took power after longtime leader Robert Mugabe was forced to resign in November 2017 but has not delivered on promises to revive the economy.

“Mnangagwa has failed, he must go,” one protester shouted. Others chanted opposition slogans and sang songs denouncing Mnangagwa, a former confidant of

Mugabe who was elected as president in an election last year that the opposition said was rigged.

“He lied that our lives will improve, but things are getting worse by the day since he took over. Prices have been rising every day,” said protester Judith Chamambo.

Most businesses in the center of Harare were closed. Some briefly opened but had closed by midday, asking workers to return home.

Many had to walk because they could not afford prices charged by the few public transport vehicles on the road. Some schools also closed and asked pupils to go home.

Police deployed in large numbers. The Zimbabwe Congress of Trade Unions, the country’s biggest labor federation, has called for a three-day strike this week.

Most clashes occurred in Harare’s Mabvuku and Epworth suburbs, where residents barricaded roads and prevented public transport vehicles from operating. Some people threw stones at cars.

Government spokesman Nick Mangwana said the opposition, civic groups and some foreign organizations are trying to use the fuel shortages and price increases to topple the government.