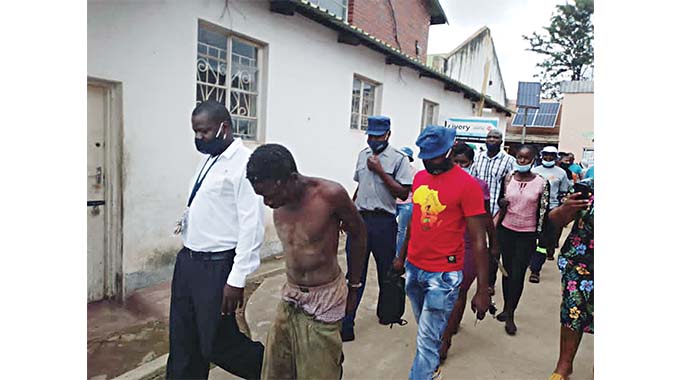 A suspected serial thief was on Tuesday morning caught in the act after he fell from the ceiling of a building in Gwanda town centre.

The suspect was apprehended at a place commonly known as Emabhizeni along 4th Avenue.

Emabhizeni is part of partitioned shops that share one roof.

A Chronicle news crew arrived at the crime scene shortly before 9AM, and the suspect was with police in a car as members of the public bayed for his blood.

The daring thief is suspected to have entered one of the shops in the wee hours and broken through the ceiling to access other shops before stealing property.

He was spotted by a worker in the next building who raised alarm.

The thief panicked and fell from the ceiling.

As he tried to flee using the front door, he was apprehended and was lucky police were nearby before the public meted instant justice on him.

“I was just arriving for work when I heard sounds at the back. I made a follow up as it was still quiet with most people not having reported to work yet. I saw the thief trying to jump from the ceiling.

“I managed to climb into the ceiling and chased after him and he fell into a shop next door to us commonly known as China Shop. Security details managed to catch him before he fled from the scene,” said a supermarket employee.

A man of the cloth, Reverend Fred Kamanga of Zimbabwe Christians Empowerment Fellowship, said the thief broke a window at his shop to gain access to other shops.

“The thief broke a top corner window and managed to lift the window handle before he gained access. He ransacked the place and only found a knife in a drawer. He then broke the ceiling before he went to other shops,” said Reverend Kamanga.

A cellphone dealer who spoke on condition of anonymity said they were trying to establish some of the things he might have stolen as a bag full of their belongings was recovered.

“We are still trying to ascertain what else this person might have stolen as we recovered a satchel which had belongings from a number of us in this shop,” said the cell phones dealer.

She could not release his identity as he is assisting police with investigations on other cases he is allegedly linked to around the town.

“I can confirm that we arrested a man in Gwanda who had broken into shops around the CBD,” said Insp Mangena.

A police source said the accused person spent the day assisting police working on other cases he is suspected to be linked with in the mining town.

“As of now, the suspect is still under the CID department as he is linked with other crimes thus, he is not available at the station,” said the source. -statemedia