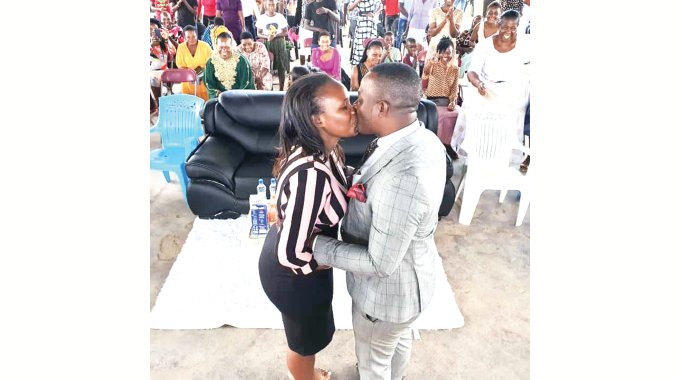 Masiyandima dumped his wife, Portia Chiwanga, 38, following a misunderstanding over allegations of juju use by him.

Masiyandima reportedly paid lobola for Melania over the weekend.

“He paid lobola for Melania over the weekend and invited one of his close friends, Charles Takavengwa, to officialise the union before his congregants,” said a source.

Melania told H-Metro that she need permission first to respond to inquiries.

“Wait, I will get back to you after seeking permission,” she said.

Masiyandima would neither confirm nor deny the new marriage.

However, his affectionate pictures of him kissing Melania in front of his congregation was proof enough that Portia’s front seat had been taken.

However, the official introduction of Melania and their lovey-dovey behaviour in front of the congregation did not amuse some church members, who walked out in disgust.

Some members were reportedly not happy with Masiyandima’s decision to dump Portia for one of their young congregants, arguing that he was setting a bad example, especially as a church leader.

Masiyandima has also allegedly shut the door for his children, with sources saying he fears Portia would use them to invent a case against him.-H-metro