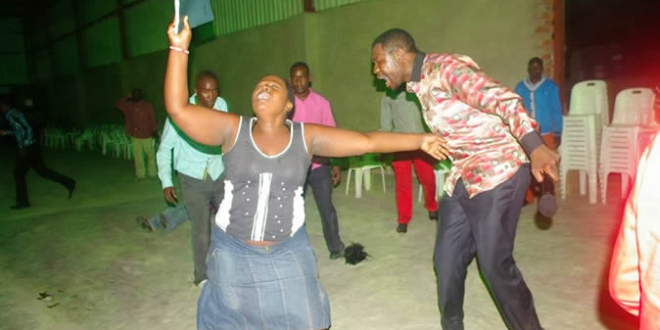 FOUNDING member of all-female dance crew, Mambokadzi, Enisia Mashusha, has made sensational claims that Prophet Walter Magaya is a sex predator preying on desperate women who work for him.

The Harare-based Mashusha’s claims are the latest against Magaya who has been accused of rape by one congregate amid other rumours of sexual escapades with different women from his church.

Mashusha made the sensational claims on her Facebook page yesterday saying she once worked for Magaya’s Prophetic Healing Deliverance (PHD) ministries four years ago. In her position at PHD, Mashusha says she was responsible for building Magaya’s image and keeping confidential information about him.

She accused Magaya of abusing his position by making love overtures to every woman who worked for him saying some fell for him.

“Asina kunyengwa na Prophet Magaya (if you haven’t been courted by Prophet Magaya) please raise up your hand?Prophet Walter Magaya, you took advantage of ministry workers and you’re still doing it,” Mashusha ranted on Facebook.

“He also started taking advantage of women and girls by sleeping with them. Some did it willingly and those who did it or who are still doing it for the love of money, you’ll be exposed together with Prophet.”

She said she would continue exposing what she knows about Magaya vowing that justice would one day prevail.

“My biggest concern is on girls and women who are being used unwillingly. Prophet, you have my voice note recording saying I’m not backing off. The word will spread until these women and girls get justice!! It might take years and years,” said Mashusha.

Her claims generated mixed feelings from people who commented on her post yesterday.

One Pelegia Makotore defended Mashusha when others on the thread said she was lying. “Please don’t be naïve. Ini zvese zvaataura zvakaitika (everything that is being claimed by Mashusha happened) and I know because I was there at the time. He isn’t selective as even people’s wives are victims.

Efforts to get a comment from Magaya’s camp yesterday were fruitless as his spokesperson PHD senior overseer Admire Mango’s mobile number was unreachable.