‘Zimbabwe’ is derived from ‘dzimba dzemabwe’, a Shona phrase which loosely translates to “large house of stone”. It’s tied to the ruins at Great Zimbabwe, that once powerful kingdom that forms the cornerstone of national pride and identity. It’s no surprise that when Independence rang in on 18 April 1980, that the powers-that-be decided that the best way to forge the country’s future was to recall its majestic past, a past before colonial quest.

36 years later, and that great house of stone is in crisis. Zimbabwe once held so much economic and social promise that it earned the title ‘the bread basket of Africa’, thanks to a prosperous agricultural sector and booming industry. Now, in 2016, the country – my country – is facing a myriad of political, economic, and social crises. 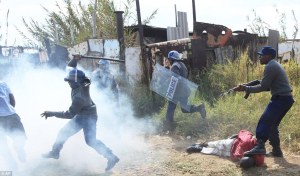 This year has seen the resurgence of a citizen movements for social and economic change, with increased calls for reform. The situation is dire: unemployment sits between 90 and 95%, and a serious drought (a result of El Nino) has affected water levels and crop output. A sharp increase in police roadblocks (with the accompanying bribe to get through), and scandal upon scandal, topped off by the disappearance of USD $15 billion, a disappearance that still has not been accounted for. Ostentatious displays of wealth and luxury on the part of politicians and businessman connected to the ruling party while people are unable to find the 50c to get home at the end of a day spent hustling: these have all chipped away at people’s resolve and willpower. We have endured hard times for close to 20 years, for some the pain and suffering has been going on for much longer. This year, the breaking point was when government talked about reintroducing bond notes into circulation.

Zimbabweans have had to deal with bond notes in the past, before the introduction of the multi-currency system in 2009. First there were the agro-cheques, which were quickly replaced by travellers cheques. They too were phased out in favour of bearer cheques, and although we were unhappy about it, we had no other choice but to use what was given. The time for bearer cheques came to an end, and then came the bond notes. They came after a decision by then Reserve Bank Governer Gideon Gono to slash the first three, then ten zeros off the currency (a failed attempt to curb the hyper-inflation). The introduction of bond notes, currency that isn’t recognised as legal tender anywhere else except Zimbabwe, was a punch in the gut to an already struggling economy. I was in high school at the time, and eight years on, I still remember walking into shops to see row upon row of empty shelves. Bread was hard to come by, with people resorting to baking their own, provided they could find the flour to make it. For two years we fought every day to feed ourselves and our families, to get to work when getting fuel was a nightmare, and finding the strength and resolve not to break down under the crushing weight of a country that seemed to go out of its way to make your life a living hell.

In May 2016, when current Reserve Bank governor John Magudya announced the reintroduction of bond notes, those memories resurfaced. Only this time, we decided that we could not go through that hell again. I’ve often heard non-Zimbabweans, complain that Zimbabweans are passive, or weak and stupid for letting things get as bad as they have. It’s a sentiment that I resent – we have lived in a culture of fear, disappearances, police brutality and intimidation for years. After witnessing some of these horrors firsthand, it’s understandable to retreat in fear rather than charge forward. However, everyone, even the most gentle and peaceloving of souls, reaches their breaking point. After the first #ThisFlag video, a short clip made by Pastor Evan Mawarire where he expresses his frustration with a broken system, a system that essentially robbed him and other citizens of a livelihood, and hijacked national symbols (such as the flag) to suit its own ends. “Hatichada and hatichatya” (we don’t want this anymore and we’re no longer afraid) became an important slogan because it encapsulated the spirit of the movement. Citizens were rejecting the fear that had crippled them into inaction for years, and were using their voices to express that they’d had enough of a system of governance that had done more harm than good for the people.

In this citizens movement it’s important not to overlook the value and power of social media, specifically Twitter. Not only has it afforded people a platform to voice their dissatisfaction without being policed (an attempt to block the Internet failed miserably), it has allowed for citizens outside the confines of Zimbabwe’s borders to get involved. There are an estimated two million Zimbabweans living and working outside the country, and although they’re physically separated from their homeland, the reality of life in Zimbabwe is still present in their minds. As someone currently not at home at the moment, I often feel powerless and inadequate when calls for civic action arise. Participating in citizen movements in the digital sphere has given Zimbabweans in the diaspora more agency and opportunity to get involved in the fight to fulfil the promise of the dream that was born on the dawn of Independence in 1980.

Although years of economic stagnation and a culture of corruption and intimidation has entrenched itself into our society, it is a country that refuses to be broken and crumble into nothingness. The protests and demonstrations have proven once again that we are a people whose resolve and determination is near impossible to subdue. With the next round of elections in 2018, it remains to be seen how citizens will navigate the future. One thing however, is certain: something has got to change, and something has got to change soon.

Mako Muzenda is a Journalism and French student at the University Currently Known as Rhodes. When she isn’t blogging or chasing assignment deadlines, she’s engaging in her passion for science fiction and learning more about Africa’s many cultures and languages. You can read her musings on Twitter @NzouSuwani.

One of the Zimbabweans who was deported from the United Kingdom (UK) is currently stranded at the quarantine centre as he has nowhere to go. The deportee, whose identity will not be disclosed, is now […]

The Minister of Information, Publicity and Broadcasting Services, Senator Monica Mutsvangwa has sent a condolence message to the Tutani family following the death of veteran journalist Conway Tutani. The veteran journalist is said to have […]

HARARE – A Central Intelligence Organisation (CIO) agent and a female passenger died half-naked in a car after a horrific road accident which also claimed the life of a police detective near Marondera, police said. […]