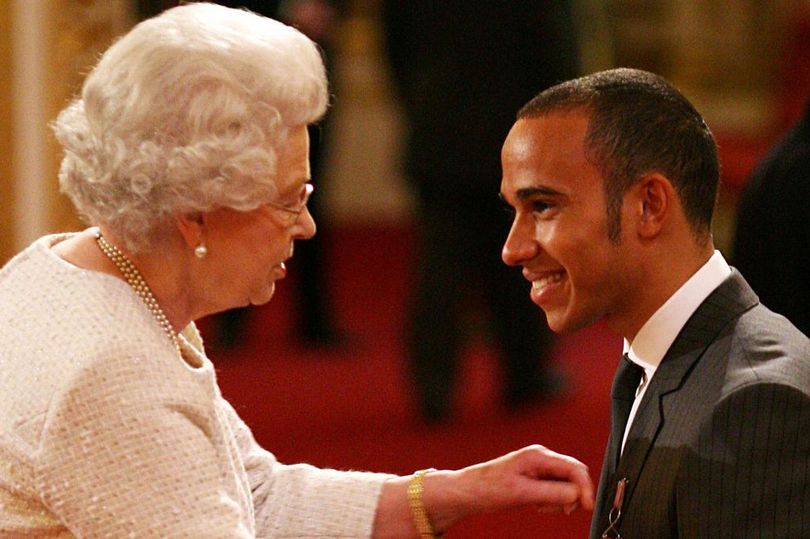 Lewis Hamilton was once told off by The Queen for his bad table manners during a lunch at Buckingham Palace.

The incident happened in 2009 when Hamilton was awarded an MBE and was later invited to a small, private lunch event to celebrate with The Queen. She had told Hamilton she was a fan and had watched him win his first world title the year before.

Hamilton was one of just eight guests at the lunch and was anxious of being on best behaviour in such an intimate environment.

The Queen’s usual unwritten rule was to seat herself next to the male guest considered to be the most important, while her husband Prince Philip did the same with a female guest of his choosing. So when she chose to be seated next to Hamilton, he was naturally excited.

But, as Hamilton told Graham Norton, he was about to get a telling off.

“I got invited to a lunch and was sitting next to The Queen,” he said. “I was excited and started to talk to her but she said, pointing to my left, ‘No, you speak that way first and I’ll speak this way and then I’ll come back to you’.”

Eventually, Her Majesty engaged in conversation with him, as Hamilton added: “She is a sweet woman and we talked about how she spends her weekends, houses and music. She is really cool.”

The Formula 1 star’s achievements have seen him meet the royal family on several occasions. One of the most recent was late last year, when he was knighted by the Prince of Wales – the man who became King Charles III following the death of his mother on Thursday.

Hamilton led a minute’s silence ahead of the first free practice at the Italian Grand Prix on Friday, in remembrance of The Queen. There will be another tribute at 2pm on sunday, ahead of the race.

Other famous people have told of The Queen’s ability to make them relax in her company despite the many Royal protocols that surrounded her.

Michelle Obama recalled the Queen dismissing Royal Protocol as “rubbish” during their first meeting. The First Lady admitted that she had all of the different protocols “buzzing in her head and apparently the Queen said to her “just get in, sit wherever.”