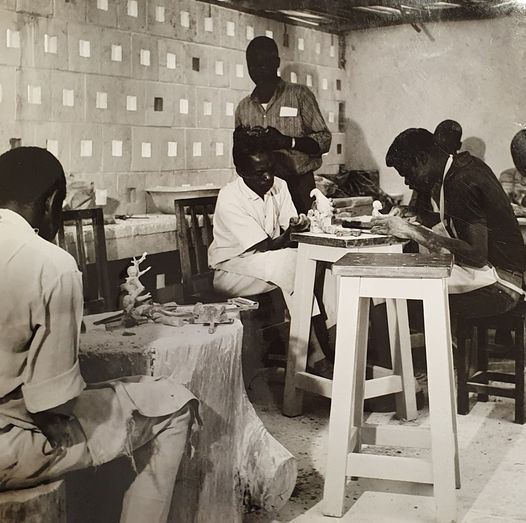 A trove of art created by students at the Cyrene Mission School in what is now Zimbabwe has returned home for the first time in 70 years. On view at the National Gallery of Zimbabwe in Harare, the works date to the 1940s, when the African country was a British colony known as Southern Rhodesia.

Founded by Scottish clergyman Edward Paterson in 1940, the Cyrene Mission offered the region’s first formal art program for Black children. Per the school’s website, students participated in mandatory art classes as part of a broader curriculum of practical and agricultural education. At the time, a white minority ruled Southern Rhodesia; education for Black students was scarce, segregated and largely religion-oriented.

Cyrene’s program encouraged young artists to document daily life and reinterpret Western Christian stories with African imagery and landscapes. The result was lush, imaginative and colorful artwork depicting everything from Jesus as a Black man to African folklore to chores at home.

“These pictures speak of hope, they speak of life, they even speak of the future,” Voti Thebe, an expert in Cyrene Mission art, tells BBC News’ Steve Vickers. “This was 40 years before the country’s independence, and there was no segregation at Cyrene Mission.”

Black students eventually traveled from across the country to study art at Cyrene. The school became a haven for young creatives, with some alumni becoming artists or founding art schools of their own.

“The focus on art at Cyrene was to prove both inspirational and liberating,” write Lisa Masterson and Neal Hovelmeier for Harare magazine. “… Many of the students were severely or partially disabled and were particularly encouraged to focus on art as a vocational career and as a form of personal therapy.”

Recognition of the Cyrene artists’ talent grew in the mid-1940s, with British king George VI visiting the school in 1947, reports Farai Mutsaka for the Associated Press (AP). Several traveling exhibitions of the students’ work took place between 1949 and 1953, bringing more than 1,200 paintings, wood carvings and sculptures to England, the United States and France, according to the exhibition guide.

After the international tour ended in 1953, the works were placed in storage in an annex of St. Michael and All Angels Church in London. They remained hidden until 1978, when the Church of England deconsecrated the space and placed its contents up for auction. A private company purchased the Cyrene collection, which eventually ended up in the care of the Belvedere Trust.https://www.facebook.com/plugins/post.php?href=https%3A%2F%2Fwww.facebook.com%2Fthestarsarebrightzw%2Fposts%2Fpfbid02YdyPCqGhjhRRvjWid47nL3ZeGc9398onBiGDX3wnvAg4eQCUwvGFWHxfQnJ9Y8Pol&show_text=true&width=500

In 2020, the trust displayed the works publicly for the first time in decades, showcasing them in a London exhibition titled “The Stars Are Bright.” Now, the show is on view in Zimbabwe—and some say that’s where the art should stay.

“It is very important for this heritage to speak to its own people,” Raphael Chikukwa, executive director of the National Gallery of Zimbabwe, tells the AP. “The families of these artists can have their children and grandchildren look at this collection, to be able to speak to this collection and to admire it. Because at the end of the day if the collection returns to the U.K., they are unlikely to have any further connection with it.”

Per the AP, organizers are negotiating with the Curtain Foundation, which owns the collection, to arrange its permanent repatriation.

“The Stars Are Bright: Zimbabwe Through the Eyes of Its Young Painters at Cyrene Mission (1940–1947)” is on view at the National Gallery of Zimbabwe in Harare through October 31.