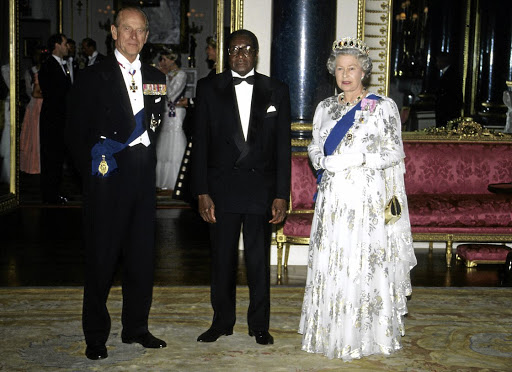 Harare, Zimbabwe – In 1991, Queen Elizabeth II visited Zimbabwe for the meeting of the heads of government in the Commonwealth, a community of former British colonies.

A photograph taken during the trip shows the host leader, Robert Mugabe, then-president of Zimbabwe, a poster child of post-colonial leadership in Africa at the time, smiling with the queen.

In a way, Mugabe’s excitement represented the national mood – the fervent interest, obsession, and fascination that Zimbabweans had with British royalty.

For many Zimbabweans, then, the United Kingdom’s longest-serving monarch who died aged 96 on Thursday, was a celebrity as much as she was a diplomat. In a country where Queen Elizabeth’s name had long been immortalised, it was not difficult to imagine why.

In the heart of the capital, Harare, the prestigious Queen Elizabeth High School is a constant reminder of the sway the monarch had in the Southern African country. A kilometre away from the school, a big hotel is named after her. To the west, another is aptly called the Queen’s Courtyard.

Beyond just buildings and schools, countless girls have been christened after her in the country, undoubtedly a show of admiration and respect.

Her visit, the first since Zimbabwe’s independence from Britain in 1980, epitomised the cordial diplomatic relations between the Crown and its former colony.

That relations between Mugabe and the British government would sour so dramatically was not seen coming and anyone suggesting it would have been dismissed contemptuously.

At the turn of the millennium, Mugabe wanted the constitution amended to allow, among other things, the seizure of white farms without compensation and redistribution to landless Black people. That, however, was rejected in a referendum.

Mugabe felt the British had reneged on their pledge to finance the country’s land purchase deal under the Lancaster House Agreement, a ceasefire settlement between nationalist rebel leaders who fought in the war of independence of the 1970s and Ian Smith, the then-prime minister of Rhodesia, who declared independence from Britain.

“We do not accept that Britain has a special responsibility to meet the cost of land purchase in Zimbabwe,” Clare Short, the UK’s then international development secretary, wrote in a letter to Mugabe’s government.

Under the Lancaster House Agreement, land redistribution would be on a “willing buyer and willing seller” basis and would be financed by the British government.

Attempts to engage further with the UK government on the land issue came to a head when gay rights activist Peter Tatchell ambushed Mugabe’s limousine in 1999 and tried to perform a citizen’s arrest when he visited London for talks with then-Foreign Office Minister Peter Hain.

The following year, Mugabe broke ranks with the British and sanctioned the invasion of white commercial farmers by veterans of the liberation struggle, who often killed and wounded farmers in the process and replaced them with landless Black people.

Banks holding billions of dollars worth of bonds as security for loans to commercial white farmers were liquidated after the attacks.

Because Zimbabwe’s economy was agriculture based, it was severely affected. For the first time, manufacturing industries had no raw materials as newly resettled farmers struggled to produce without funding. Production fell, triggering layoffs.

With no security of tenure for newly acquired land, Black Zimbabwean farmers struggled to raise funding for production.

It also did not help that the Mugabe administration, which had become increasingly dictatorial, failed to plan properly for the transition.

Politically, the appearance of opposition leader Morgan Tsvangirai’s Movement for Democratic Change (MDC) on the political scene in 1999 was a source of discomfort for Mugabe. He believed the opposition was being funded by the UK government and commercial farmers – keen to keep their land – an accusation Mubabe’s ZANU-PF administration maintains to this date.

In the run-up to the 2002 elections, ZANU-PF unleashed violence on the opposition MDC, a development observers said helped skew the vote in its favour. The Commonwealth suspended Zimbabwe from the group for the deadly electoral violence.

That culminated in the total breakdown of relations between the two countries.

“We are not Europeans,” Mugabe told delegates at the World Summit on Sustainable Development in September 2002, six months after Zimbabwe was suspended from the Commonwealth. “We have not asked for any inch of Europe, or any square inch of that territory. So [PM Tony] Blair, keep your England and let me keep my Zimbabwe.”

Emmerson Mnangagwa, who took over from Mugabe in a November 2017 military coup, has largely followed in his predecessor’s footsteps, accusing Britain in December 2021 of a “brazen, self-confessed” violation of Zimbabwe’s “sovereignty”, adding this was a threat to “our national security and stability by the British government”.

His comments came after the British House of Lords discussed what Mnangagwa said were efforts to influence domestic politics by engaging teachers’ unions in the country.

Yet, despite the differences between the British and Harare regime, the monarch’s affection for Zimbabwe remained unchanged.

At the age of 21 in April 1947, the then-princess made her first royal tour of Southern Rhodesia with her parents – the Queen Mother and King George VI and her sister, Princess Margaret.

“From the few times she has been here, she told me how much she loved the country and the people,” former British ambassador to Zimbabwe Deborah Bronnert said in 2012.

But as the ceremonial head of the British government, she never really took ownership for the actions of the empire she headed.

Colonial-era laws on the acquisition of land barred rural Zimbabweans from having land titles and still exist today.

The self-governing British colony of Southern Rhodesia and the British protectorates of Northern Rhodesia and Nyasaland were federalised between 1953 and 1963. It eventually collapsed into what is today Zimbabwe and Malawi, but its legacy remains. Many Malawian residents in Zimbabwe are stateless.

Despite the marked diplomatic differences, the queen never publicly spoke against Mugabe and vice versa. Mugabe, who had a sharp tongue and enjoyed berating his opponents, avoided naming Elizabeth II.

To him, the real enemy was government leaders such as Tony Blair and Gordon Brown, whom he verbally attacked at any given opportunity.

“I do not think that Tony Blair and Clare Short consulted the monarch when they decided on reneging disbursing money for land reform and restitution in Zimbabwe. It was a political decision,” Ngoni Mahuku, a lecturer in international relations at Bindura University, told Al Jazeera.

Stephen Chan, professor of world politics at the University of London’s School of Oriental and African Studies, told Al Jazeera that “Mugabe had much time for the queen”.

“She is a symbol of government and is not the government, so she herself could not have caused the reaction to the land reform,” said Chan.

After Blair withheld funding as agreed under the Lancaster House Agreement, Mugabe reacted by grabbing farms.

Critics say the late British monarch’s failure to protect the weak under her rule in the colonial era was her greatest undoing.

Under British rule, Africans suffered intolerable cruelty and demeaning treatment from colonial administrations. Racial segregation was the order of the day.

He criticised her, however, for failing to “promote the interests of Africans in the colonial era” with subjects of colour “suffering at the hands of white colonialists while the Crown essentially kept quiet”.

“The British monarch supervised colonialism and the looting of Africa by Britain, but unlike African dictators, the looting benefitted British people not an individual,” Hopewell Chin’ono, an award-winning journalist wrote in a Facebook post on Thursday.

Yet, an outpouring of condolences on social media in Zimbabwe came after the queen’s death.

Added Oliver Keith: “I have seen many Zimbabweans lambasting us for expressing our condolences in the passing of Queen Elizabeth, suggesting that she was an oppressor. Listen, no one dictates to me what I should or shouldn’t post. I was born into a free Zimbabwe in 1986.”