Robert Mugabe admits he died in shock confession after disappearing

AFRICAN dictator Robert Mugabe has confessed he died after days of rumours about his demise.

TYRANT: Robert Mugabe at Harare airport and, inset, an anti-government protest in May 2016

The Zimbabwean President caused a storm of speculation this week after leaving a key African summit early.His private jet soon set off for Singapore, where the 93-year-old has received medical treatment on past occasions.

But then it suddenly swerved towards Dubai, fuelling rumours that Mugabe had died and had been rushed to a nearer hospital. 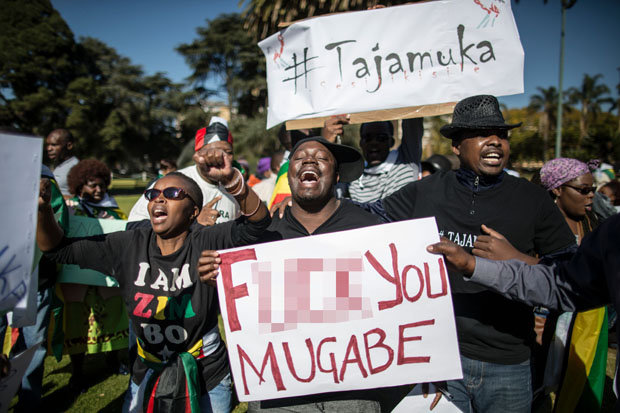 “Yes, I was dead, it’s true I was dead. I resurrected as I always do,” he said in the local Shona language.

However he did nothing to assuage talk of his frailty, walking slowly from the plane to his motorcade.

Reports of his ill health have also become common, though he insists he is “fit as a fiddle”.Meanwhile continued protests reveal the growing anger in Zimbabwe at the economic meltdown Mugabe has overseen.

The president, who hopes to be reelected in 2018, has accused Western countries of sponsoring the protests and rejects all blame.

He also insisted there will be no Arab Spring in Zimbabwe – referring to the 2011 protests that toppled a number of Middle Eastern governments.-DailyStar