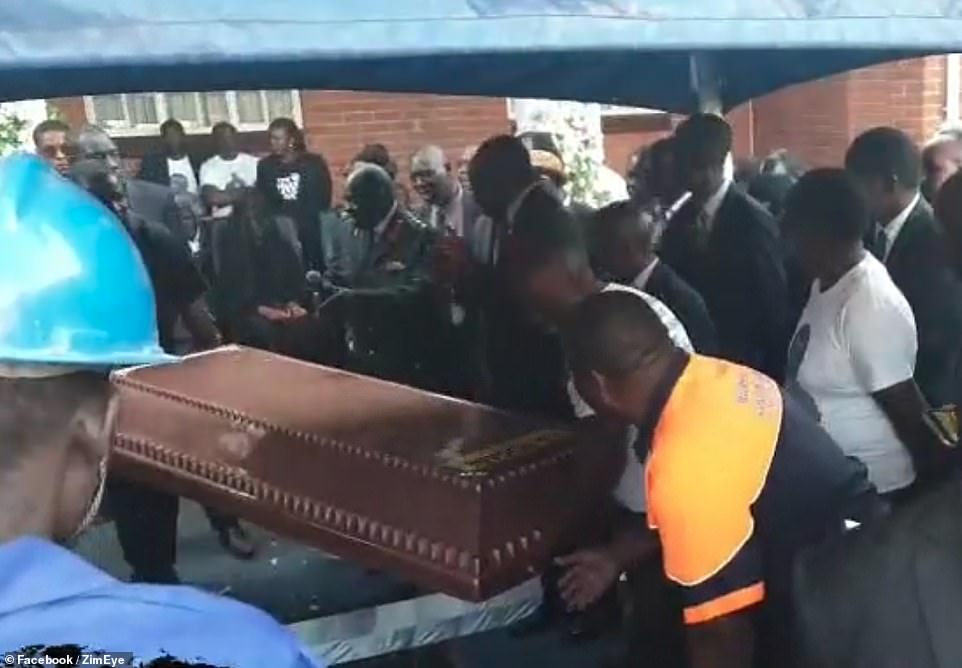 The bizarre burial of Robert Mugabe saw the former Zimbabwean leader interred in a steel-lined coffin under a layer of concrete on Saturday, following a bitter dispute over his resting place between government officials, traditional leaders and family members.

Twenty-two days after he died, the body of the strongman was finally buried next to his home with second wife Grace Mugabe in Kutama, Zvimba, the village of his birth, 55 miles north west of Harare.

His eldest nephew, Leo Mugabe, who played a central role in the prolonged burial drama, said the coffin which brought his embalmed body to Harare from Singapore had to be changed for security reasons.

“People really are after his body or his body parts, so we wanted something that is tamper-proof. That is why the casket was changed,” he told a local radio station.

After the coffin was lowered into the ground in a private ceremony close to the home which Grace Mugabe had built after their marriage, concrete was laid down around it.

Mugabe’s family claimed that this was the burial place he had ultimately wanted and had spoken of in the last six months of his life in Singapore, angry that he had been ousted from power two years ago by his long-time ally, President Emmerson Mnangagwa.

Mrs Mugabe, 54, draped in heavy black lace for more than three weeks, had made it clear to all who would listen that Mr Mnangagwa and his loyalists were not welcome at the burial. Had he been buried at Heroes Acre, the burial ground commissioned by her late husband and the resting place preferred by the government, she would not have been able to prevent their attendance. Crucially, it would also have meant him being buried next to his first wife, Sally Mugabe, still regarded by many as the “mother” of the Zimbabwean nation.Grace Mugabe had claimed that her late husband did not want to be interred at Heroes Acre, the burial ground and national monument which also holds the grave of his first wife, Sally CREDIT: TSVANGIRAYI MUKWAZHI/AP

Amid various conflicting claims over his wishes, Mugabe, who died of cancer aged 95, had reportedly also said that he wanted to be buried next to his mother elsewhere in Zvimba. Leo Mugabe asserted that this was not possible due to a lack of space – although The Telegraph ascertained that there was in fact plenty of available ground within a few yards of his mother’s ornate grave.

Last week, Mrs Mugabe had come up with another proposal, saying she wanted her late husband buried in the grounds of their Harare mansion, informally known by locals as the Blue Roof.

But the Harare City Council said that was not possible as the land was not a cemetery. Mrs Mugabe then also discovered that the title deeds of the multi-million pound home, with massive landscaped grounds, lake and wildlife, was in the name of a company owned by the ruling Zanu PF party.

In a late twist in the saga, the Mugabe family had finally agreed, after negotiations with traditional leaders and the government, that the former president could after all be buried at Heroes Acre. But this was on the condition that a mausoleum would be built for him on the crest of the hill overlooking hundreds of graves of his former colleagues, mainly from the war against Rhodesian minority white rule.

Mugabe’s sons, Robert Jnr and Chatunga, agreed the site of the mausoleum, and building began – only for the plan to be changed again. The costs of the abandoned preparations are not known.

The official funeral service for Mugabe, attended by 11 African heads of state, was held two weeks ago in a half empty stadium in Harare.-Telegraph