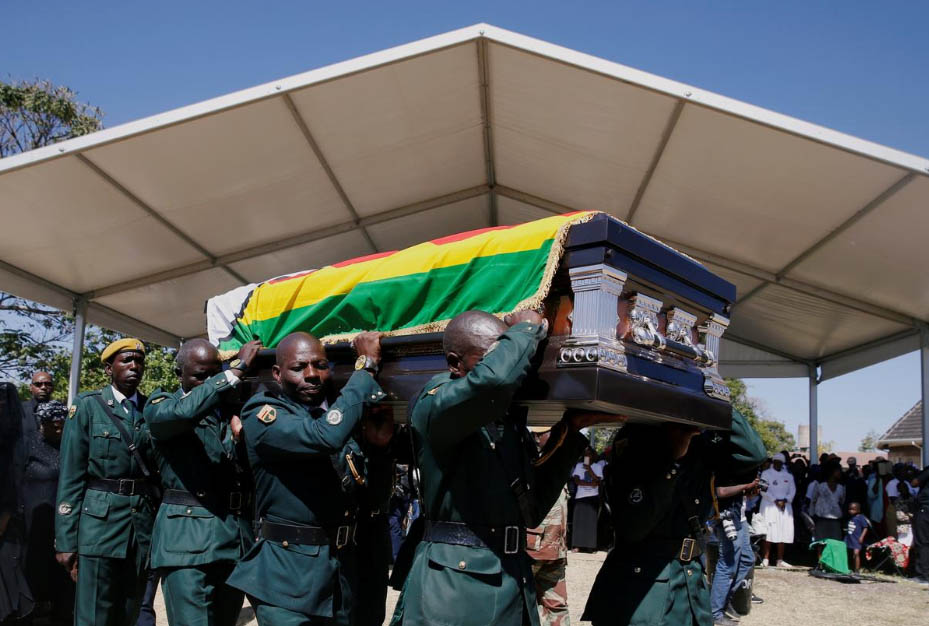 KUTAMA – Zimbabwe’s founding leader Robert Mugabe was buried on Saturday in his home village of Kutama, ending a dispute between his family and the government of his successor President Emmerson Mnangagwa over his final resting place.

Mugabe ruled Zimbabwe for 37 years from independence in 1980 but was a polarising figure idolised by some for his role in the country’s liberation struggle and hated by others for ruining a promising nation through disastrous economic policies and repression against opponents.

He died in a Singapore hospital on September 6 aged 95, bitter at the way former allies including Mnangagwa conspired with the military to topple him in November 2017 and told his family he did not want his “tormentors” to preside over his burial, family members said.

His burial marks the end of an era for one of Africa’s last “Big Men”.

After Mass by a Roman Catholic priest and speeches by family members, Mugabe was buried in the courtyard of his rural homestead without the pomp and fun fare usually reserved for national heroes.

His wife Grace, children and close relatives, government officials and the media witnessed the burial ceremony.

Mugabe’s coffin, draped in the country’s flag, was carried by military pallbearers as his black-veiled wife, Grace, looked on.

On display was a photo of Mugabe holding up his fist in a classic gesture of defiance, and a floral arrangement spelled out “Dad.” Many mourners wore T-shirts saying “Liberator” and “Torch Bearer.”

As Mugabe’s casket was lowered into the ground, Grace, who covered her face with a black veil, was flanked by her sister and children and was seen sobbing and wiping tears with a white handkerchief.

Grace later stood motionless as the coffin was lowered into the grave and a choir sang “Remember me.”

In speeches, relatives said Mugabe’s wish before he died was to be buried in Kutama and not the National Heroes Acre monument in the capital, where Mnangagwa and the ruling Zanu PF party had sought to bury him.

“There maybe others who may think that the (Mugabe) family did something that was not in sync maybe with other ideas from our party Zanu PF or the government,” Walter Chidhakwa, a Mugabe family spokesman said.

Grace’s sister Junior Shuvai Gumbochuma added: “Some may be surprised by this small crowd given this man’s greatness. I remember he presided over many burials of heroes that were attended by busloads of people. I thought one day such crowds would attend his own burial. What we did today was his wish.

“I asked him why he didn’t want to be buried at Heroes Acre and he responded: ‘I was ridiculed.’”

Only approved guests and funeral parlour vans were allowed, a decision out of sync with the local tradition that funerals are free for all to attend. One elderly neighbour threw a tantrum after being blocked at the gate.

“This gathering is a paradox,” the priest told the gathering. “We are mourning at the same time we are celebrating because this man lived his life in a manner that many of us would want to emulate.”

Later, standing by the coffin, he prayed: “God, take pity on him. Don’t judge him harshly.”

Mnangagwa, who was represented by government officials, had initially pushed for Mugabe to be buried at the monument for liberation war heroes – an occasion political analysts and Zanu PF party sources said Mnangagwa wanted to use to display a public reconciliation with Mugabe’s admirers.

Mugabe’s family had since the arrival of his body from Singapore, kept vigil over his remains because the former president had expressed fears to close family members before his death that some of the people who ousted him would seek to conduct a traditional ritual with some of his body parts, Mugabe’s nephew Leo Mugabe said.

Zanu PF spokesman Simon Khaya Moyo said in a statement that the decision to bury Mugabe in Kutama was most unfortunate, in a sign of the continued fall-out between the ruling party and the family.

“We indeed respect the wishes of the families of deceased heroes, hence get saddened when manoeuvres that border on political gimmicks begin to unfold on an issue concerning an illustrious liberation icon,” Khaya Moyo said. – Reuters/AP