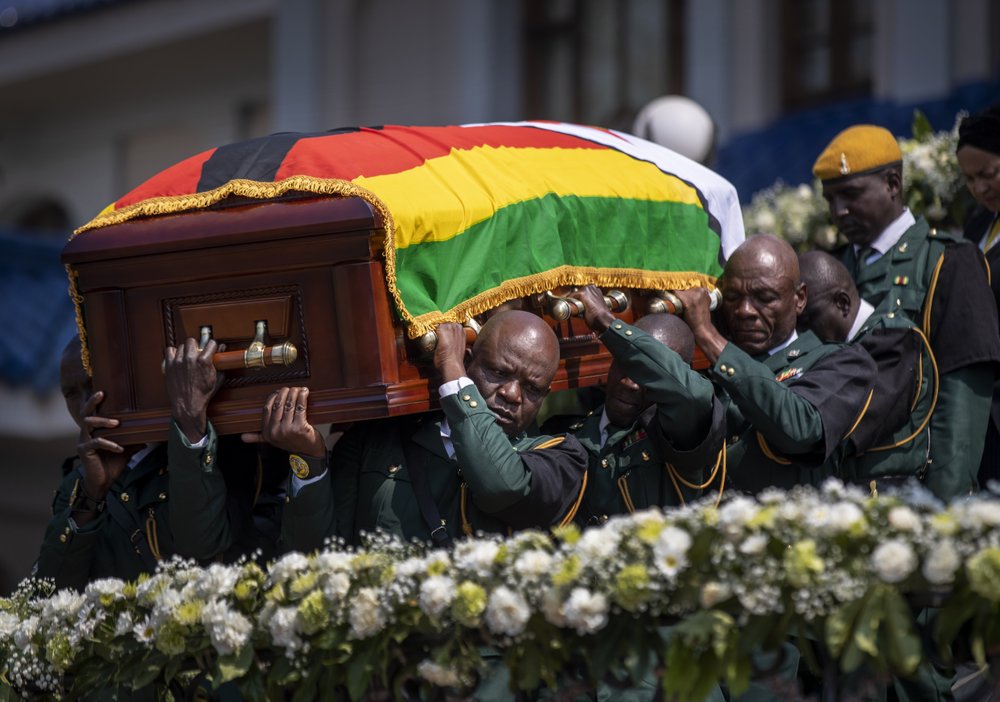 COLOGNE– Former President, Robert Mugabe, has reportedly already been buried in secret at a mysterious location, in his rural home of Zvimba, Spotlight Zimbabwe has revealed.

Mugabe died on 6 September at Gleneagles Hospital in Singapore, from advanced prostate cancer, which he failed to recover from after a six-month stay in the Asian country, where he received treatment, state media reported yesterday.

However citing a U.S. diplomatic cable, whistleblower and news leaks website, WikiLeaks, as far back as 2011, was the first to reveal that Mugabe had prostate cancer that had spread to other organs and was urged by his physician to step down in 2008.

In the cable dated June 2008 and written by James D. McGee, the former U.S. ambassador in Harare, former Central Bank governor Gideon Gono was quoted as saying the cancer could lead to Mugabe’s death in three to five years.

“Gideon Gono, governor of the Reserve Bank of Zimbabwe, told the ambassador … that President Robert Mugabe has prostate cancer that has metastasized and, according to doctors, will cause his death in three to five years,” the cable said.

According to a close relative of the Mugabe family, the late veteran politician was laid to rest last week, during a night burial ceremony at a hidden location in Zvimba only known to traditional chiefs, his wife Grace and immediate family.

“The whole thing about a mausoleum construction was a tactical diversion,” said the relative, who also served in Mugabe’s administration at one point.

“The president made it clear that he wanted to be buried in his rural home, and that his body be interred by chiefs in the area, at a location only known to them and his immediate family.

“Yes, there shall be a private event at Heroes Acre in Harare, when the mausoleum is complete, but it’s all going to be symbolic. That is not Mugabe’s final resting place, but as a founding father of our country, it made sense to have a mausoleum built for him on top of the hill at the national shrine.”

Government said construction of the mausoleum is envisaged to be complete in about 30 days. Local online reports say the contract to construct the mausoleum, at an estimated cost of over a US$1 million was awarded to a Chinese company, Shanghai Construction Group, which is currently building the new Parliament of Zimbabwe in Mt Hampden.

Before his death sometime in August, Mugabe is said to have told his family that he does not want President Emmerson Mnangagwa and his allies to take custody of his body as it might be used for ritualistic and occultic purposes, reports in local private media said.

Mugabe also indicated that he did not want to be associated with Mnangagwa, because he feared there was a huge risk the ruling Zanu PF leader, could use his body for rituals, to consolidate and maintain power.

To that effect, Mugabe’s family had refused to allow Mnangagwa’s government to take Mugabe’s body to One Commando Barracks or any other mortuary as they believed that his enemies wanted to take his organs and use them for occult rituals to enhance their powers.

The occult is a collection of beliefs and practices founded on the premise that humans can tap into a supernatural world. Once connected to this other realm, various rituals and special knowledge are used by those involved to allow a person to gain abilities and power they would otherwise not possess. These powers include controlling the nature world or other people.

“President Mugabe is now resting in peace. It is true that he was buried in Zvimba last week. What you have at his blue roof mansion, is a dummy coffin, for a dummy burial upon the completion of the mausoleum at the Heroes Acre, which will definitely take more than 30 days.

If they are fast enough, they’ll need at least two or three months to finish, because the site is new and an engineering feat of its own,” said a senior official with the Department of Museums and National Monuments last night.

Zodwa Wabantu , New Bae Open Up About Their Love