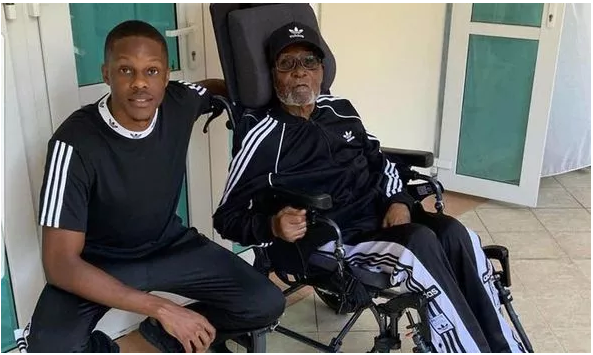 Robert Mugabe planned to return to the country at the end of this month and mutually agreed to meet President Emmerson Mnangagwa upon his homecoming before his untimely death last Friday, Director-General in the President’s Office Mr Isaac Moyo said.

DG Moyo, who was the point man in liaisons between the State and the former First Family, said the former President died around 4am at Gleneagles Hospital in Singapore, despite having briefly shown signs of improvement earlier in the week.Mugabe spent five months receiving treatment in Singapore.

The State materially supported Mugabe and his family’s upkeep during the period.

In an exclusive hour-long interview with The Sunday Mail yesterday, in which he described intricate details of his time with the Mugabes, Mr Moyo gave details of how he had learnt of the devastating news of Cde Mugabe’s demise in the wee hours of Friday, after having communicated daily with Mrs Mugabe last week.

“Last Saturday, I got a call from Amai Mugabe and she said that the former President had been admitted to hospital. We again spoke on Sunday and she said there was not much change.

“We spoke earlier in the week and she said that his condition had improved. However, on Wednesday night, she said there had been a significant deterioration in his condition.

“That day, she spoke in an agonised voice and I did the best I could to comfort her. I spoke to her again on Thursday, in the morning and in the evening and she said the situation was really bad.

“When I woke up at around 4am on day morning, I saw a missed WhatsApp call from the former First Lady and I immediately sensed that something was wrong. Ever since we had communicated, she had not called around that time.

“Upon returning the call, she conveyed the sad news that the former President had passed on. She broke down and it was painful hearing her voice from the other side of the phone,” he said.

Amai Mugabe told him that Cde Mugabe passed on “between two to three minutes” after the missed call.

Mr Moyo said soon after speaking to the former First Lady, he conveyed the message to President Mnangagwa, who informed him that he would call Amai Mugabe to convey his condolences.

“At that point, I needed to advise the President and I called him just after 4am. Fortunately, the President is the type of person who picks up his phone, unlike others whom when you call at night you will be lucky to get answered. He picked up his phone from Cape Town and I broke the news to him. After that, the President then also called Mai Mugabe to say that he had heard the news and to convey his condolences.”

DG Moyo said he could hear from the tone of the President that the news of his former boss had devasted him given the fact that the two had mutually agreed to meet upon Cde Mugabe’s return.

“The former President hoped he was going to come back home and that he wished to see the former President upon his return. We had told him that the President looked forward to seeing him upon his return and he had also expressed similar sentiments that he would be delighted to meet the President. And at that time, we were told that the last date of his medical engagements was the 17th of October and that soon after he would return home. A week after our return, I then got a call from Mrs Mugabe and she said that the treatment regime that the former President was having would no longer be extended to October, it would end in September instead and because of that, they were now scheduled to come back home at the end of September.”

DG Moyo said since last year, he had developed a cordial relationship with the Mugabes, characterised by frank engagements with the couple who freely opened up to him on their concerns.

“For the last year, in fact even before the elections, the President assigned me to be the link man between former President Robert Mugabe and his wife . . .

“Members of the Mugabe family like Walter Chidhakwa and Albert Mugabe (nephews to Mugabe) visited me and told me of their desire to visit Singapore and from that time I had also informed the President in turn had tasked me to work with the family, and he tasked me to ensure that they were able to go.

“We had actually assisted the former first lady’s sister — Mrs Gumbochuma — to go to Singapore. She did not have a passport and we used our good relations with the Registrar-General to consider treating her passport application as a humanitarian emergency.”

DG Moyo said he was surprised to see news that Cde Mugabe had refused to be buried at the National Heroes Acre.

“I saw it in the newspapers. When we went there to see the former President, there was absolutely none of that. I was actually surprised to see it in one of the newspapers. If they had such a feeling, they had managed to hide it from us. You can see from the description I gave there was no hint of that. We actually had a very good engagement.

DG Moyo said last year, Mugabe visited Singapore for routine medical check-ups before returning home, but this year, doctors had requested for an extension of his time under treatment.

“He was staying in a house that he was renting privately. It was not paid by Government, but from his own resources. Government only paid for his medicals. But the accommodation he paid for himself. It was fairly small (single storey) Singaporean suburban house that was convenient for his condition.”

“And the former First Lady said she then encouraged him to follow his real wishes and to vote for comrades he has always been with and not to worry about the small matters between them, and so the former First Lady, with the concurrence of Cde Mugabe himself, said he had not voted for MDC, but he had voted correctly, I found that fun and I enjoyed the story.”-sundaymail

Meet Zimbabwe’s Richest: How they made their money