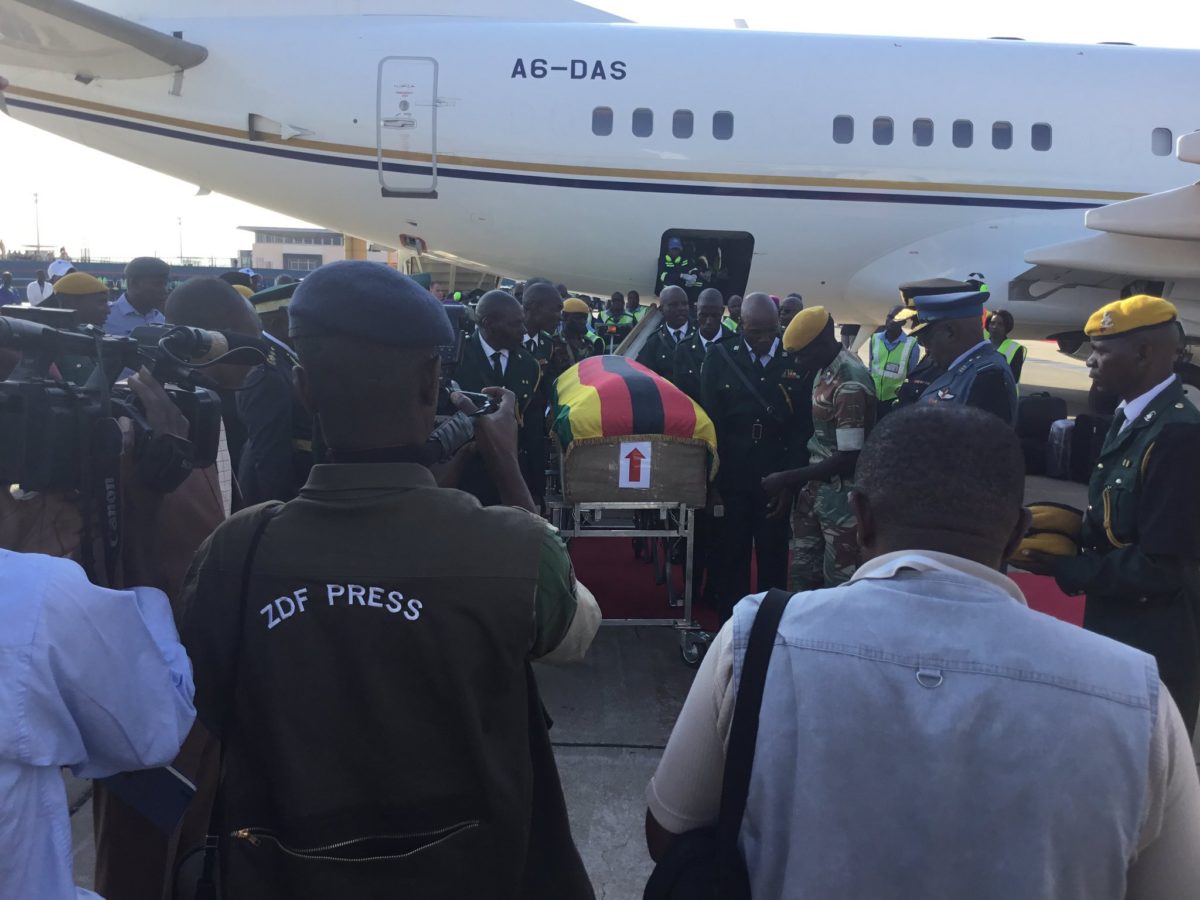 HARARE – The body of former President Robert Mugabe arrived in Harare on Wednesday afternoon, officially-kicking off a funeral programme which will culminate in his burial on Sunday.

A charter plane bringing Mugabe’s remains landed at 3.25PM at the main airport in Harare named after the polarising former Zanu PF leader.

Mugabe, Zimbabwe’s first leader who ruled the nation for 37 years until he was ousted by the military in November 2017, died in a Singapore hospital on September 6 at the age of 95.

President Emmerson Mnagagwa and the first lady, Auxillia, were at the foot of the plane’s steps to receive Mugabe’s widow, Grace who covered her head with a black veil and walked with her children Bona, Chatunga and Robert Junior.

Speaking shortly afterwards to a few hundred people gathered at the airport, Mnangagwa announced that Mugabe would be laid to rest on Sunday.

Mnangagwa, who was Mugabe’s closest ally and vice president before ousting him with the military, praised him as “our revolutionary commander … an icon of pan-Africanism” and “the man who created our nation.”

Mugabe is proving as polarising in death as he was in life, as the fight over where he will be buried threatens to embarrass his successor, Mnangagwa, and deepen divisions in the ruling Zanu PF party.

Mugabe’s body was taken to the nearby One Commando military barracks from the airport, but perhaps to illustrate the tensions between the family and the government, Mugabe’s relatives insisted on taking the body away to his Blue Roof residence in the plush Borrowdale suburb overnight.

Jonathan Moyo, one of Mugabe’s loyalists and former minister who fled to Kenya during the coup, earlier tweeted: “And let it not be forgotten that One Commando is one of the three regiments that executed the military coup on November 15, 2017, in brutal violation of the Constitution of Zimbabwe. It will be in bad taste to take President Mugabe’s body there. Blue Roof is the best place!”

A funeral programme would be announced by the home affairs ministry after consultations with the Mugabe family, Mnangagwa said.

But some family members are digging in, maintaining that he should be buried at his birthplace in Kutama, some 85 kilometers northwest of Harare. Mnangagwa is unlikely to attend the burial if it is held away from the Heroes Acre, following tradition.

Mugabe’s nephew Patrick Zhuwao, who now lives in South Africa, said on Tuesday that the government should respect Mugabe’s wishes to be buried next to his mother in Kutama, warning that “hijacking President Mugabe’s legacy for expediency will only provide transient relief to such grave robbers.”

On Thursday and Friday, Mugabe’s body will be on public display at Rufaro Stadium in the Mbare neighbourhood for public viewing before it is moved Saturday to the National Sports Stadium, where African heads of state, dignitaries and the public will attend a service.

As Mugabe’s body made its way to his former home, Harare otherwise remained bustling, with vehicles lined up for scarce fuel, vendors selling vegetables and currency dealers selling cash.

Jon Snow on his Zimbabwe holiday