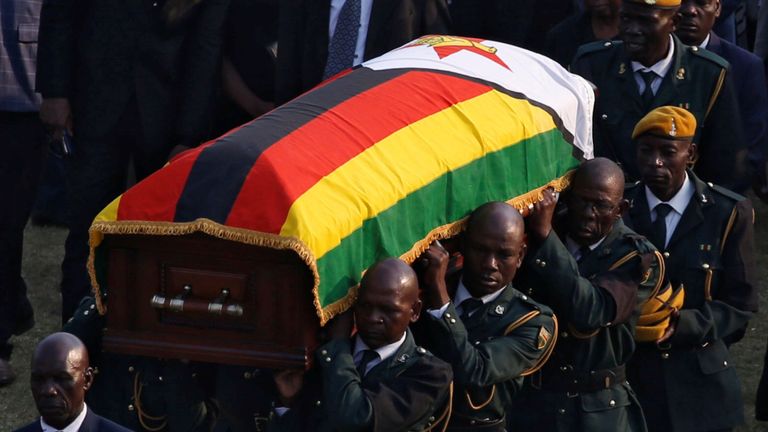 THE family of the late national hero, former President Robert Mugabe, on Thursday dismissed as speculation claims circulating on social media that his remains will be flown to Singapore for safe keeping.

This also comes amid reports that the family is resisting moves to have Mugabe’s body kept at the One Commando mortuary until the day of burial.

The family has, however, refused to divulge the mortuary where the body will be kept besides the Blue Roof.

During an exclusive interview with Zim Morning Post, Leo Mugabe said the rumours which have taken social media by storm were false.

“There have been messages circulating on social media about the remains of the former leader being flown back to Singapore; they are false,” Leo said.

“We all woke up to these messages on WhatsApp, but they are just rumours and nothing of that nature is happening.”

“I am not sure about the One Commando thing. All we know is the body will be kept safely,” Leo said.

Leo, however, struggled to give a comprehensive explanation concerning where the body of the late leader would be kept while preparations of his burial were being finalised.

Since the body arrived in Zimbabwe, it has never been taken to a local funeral palour on the backdrop of reports that Mugabes body was embalmed to last for five years.

The 95 year old leader, who died on September 6, is yet to be buried as government has engaged a Chinese company, Shanghai Construction Group, to build a mausoleum at the National Heroes Acre as his final resting place.

The burial is set for mid-October when construction of the mausoleum is expected to have been completed.

Mugabe ascended to power as Prime Minister when the country attained its independence from Britain in 1980, later becoming executive President of Zimbabwe in 1987.

In November 2017, he was ousted from power through a military intervention after internal squabbles in Zanu PF reached fever pitch.-zimpost

Chamisa Fired for alleged gross incompetence and abuse of office