Second deportation flight to Zimbabwe due to leave today 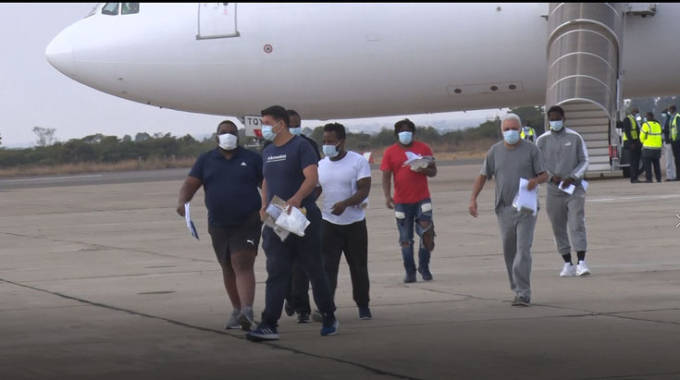 A second deportation charter flight to Zimbabwe is due to leave the UK today, according to campaigner Zita Holbourne.

Last week, The Voice reported that dozens of Zimbabwean nationals were being rounded up and held in Brook House Immigration Removal Centre. Zita Holbourne, co-founder and national Chair of campaign group Black Activists Rising Against Cuts (BARAC) UK, has been in contact with those facing removal.

The initial target for Zimbabwe was 150 people and they are now going for higher numbers, whereas before the government would target 50 people and would only deport 10.

Speaking to The Voice, she said: “One of the detainees I have been speaking to has told me they haven’t been given any details yet. But they tend to get transfer information late, to avoid it getting out. A lot of the recent deportation flights have left at night and I think this one will also be a late flight.”

Ms Holbourne said many of the Zimbabwean nationals she has been working with, have been taken off the flight after last minute legal challenges, just like the Jamaica charter flight – which left two weeks ago.

She suspects it may leave from Stansted Airport tonight and believes another deportation flight to Jamaica is likely this year. “The initial target for Zimbabwe was 150 people and they are now going for higher numbers, whereas before the government would target 50 people and would only deport 10. Now, they are targeting more people in the hope they can remove more of them. I think there will now be monthly chartered flights to Zimbabwe.”

On 21 July this year, a controversial charter flight to Harare left with only 14 people on board after many were granted injunctions following legal action. This was the first mass deportation flight to Zimbabwe for a number of years.

Lawyers believe the UK has struck a deal with the country’s new government to accept Zimbabwean nationals being removed from Britain, despite concerns from campaigners about the country’s growing political and social unrest.

Ms Holbourne said some of those facing deportation have lived in the UK since they were young children – with many forced to flee with their parents because of political beliefs, opposition to Zimbabwean government or the nature of their jobs.

She also criticised media reports which has labelled all of those being deported as rapists and murderers and said that two of the detainee’s she has been working with came to Britain at the ages of 4 and 8.

She said: “The reality is you may find there is one rapist and one murderer but everyone has been labelled as committing the same crime. Some of those facing removal have convictions for traffic offences and burglary but they have all been branded as rapists and murderers and when they are deported people threaten them and are reluctant to help.

The TUC is concerned that the Home Office does not adequately check the circumstances of those they targeted for deportation.

“Their chances of getting a job are very low because of this and they have no financial support unless they have families who can help them and most of them don’t.”

The Trades Union Congress (TUC) has called on the government to urgently suspend all deportation flights and to address “the miscarriages of justice that have taken place within the immigration system”.

In a statement yesterday, a TUC spokesperson said:

“The TUC is concerned that the Home Office does not adequately check the circumstances of those they targeted for deportation. Many have no family, social or financial links with the countries they are due to be deported to, and would be placed at risk of persecution, isolation and poverty. These deportations are also taking place whilst high levels of Covid-19 infections are still present in immigration detention centres. This puts both residents and staff at risk and jeopardises the health and wellbeing of asylum seekers, those involved in the deportations, and communities in the countries that asylum seekers are deported to.”

Ms Holbourne said deportations have a devastating and unseen impact on the families and children left behind:

“The children are traumatised and we have seen it time and time again, they suffer with depression and have behavioural problems –as a result of being torn away from a loved one. Their future prospects are in jeopardy if they are suffering from anxiety and can’t do their exams. Deportations ruin lives and not just those who have been removed, but their loved ones left in the UK to pick up the pieces too.

One man, known as Tawanda, who came to the UK aged 8, has been taken off the flight to Zimbabwe after testing positive for Covid-19, according to BARAC UK.

Ms Holbourne has started a petition to halt any removals and said:

“It is important to sign the petition it because it sends a message to the government and all of the organisations that are complicit with deportation flights that those being targeted aren’t alone. You will get updates about what action you can take next and how you can help and it boosts the morale of those impacted.-TheVoice