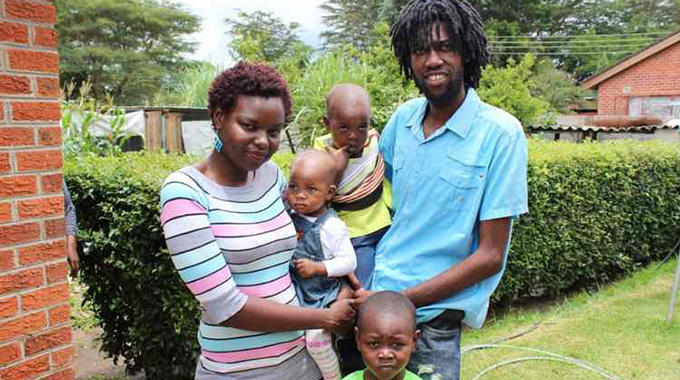 As Tanga WekwaSando belted his timeless classic “Wake” to charm his fans at live shows during the peak of his career, he probably did not notice a youthful couple in his band exchanging suggestive glances.

To him, the young man and the young lady were evidence of talent being passed from one generation to the other. He adored their talents and knew they were an integral part of his group because of their rich musical backgrounds.

He was also proud to have them in his band because he had worked with their fathers in the industry for a long time. He respected Oliver Mtukudzi and Zexie Manatsa as his companions in the industry and working with their children was a sign of good relations with the popular musicians.

Little did Tanga know that he was doing more than just nurturing his friends’ children.

He was also nurturing a future family in Selmor Mtukudzi and Tendai Manatsa.

Selmor knew Zexie Manatsa. Tendai had seen Oliver Mtukudzi performing, but neither dreamt they would bring the two musicians closer with marital bliss.

They first met when Selmor joined Tanga WekwaSando’s group in 2002 as a backing vocalist. Tendai was already with the band as a guitarist.

So, there they were. Oliver Mtukudzi’s daughter and Zexie Manatsa’s son. Both coming from celebrity families.

At first it was all about music, but their youthful romantic instincts were brewing something from within.

“I first saw her the day she joined the band. She was introduced as Tuku’s daughter and it was good to have her in the band. I admired her father and I knew he worked with my father in various projects. I felt it would be good to know her better, but then, it was all about music,” Tendai recalled in an interview this week.

Selmor also felt it was good to work with someone who came from a similar background as hers.

“I knew Zexie Manatsa’s music, but I did not know about his son. Something told me we could do something together when I was introduced to Tendai, but then, it was all about music,” Selmor has a similar script of their life story.

As time went by as they worked together with Tanga, feelings of liking each other began manifesting. There was a possibility of a stronger relationship and those romantic instincts were in mutual communion.

So, it was inevitable that when Tanga played “Wake”, those occasional glances began betraying their inner feelings for each other. But then, it was it still all about music?

Both admit they liked each other, but nothing went beyond music until Selmor left Tanga’s group to join Kwekwe Band and later Jabavu Drive.

They would rarely meet as they continued with their careers with separate groups, with Tendai joining Afrika Revenge. Maybe the youthful romantic instincts were just temporary, after all.

But the invisible hand of fate was already writing a script of Tendai and Selmor’s life story. And it seems the gods had already made the decision to bring the two together.

Tendai and Selmor found themselves in the same band again. And this time it was no longer all about music.

They started dating while they toured with Pax Afro.

“When we met again, our relationship grew stronger and we started dating. We became closer and we clicked well. That is how it all started,” said Selmor.

When Pax Afro collapsed, they went on to form their own group well before they got married.

The group had constant slots at The Mannenberg in Harare, but the journey was not rosy.

“We had a Tuesday slot, but things did not go well for us in the first days. Sometimes we would perform for three or four people and it was straining.

“I remember how the whole band of six would sleep in one room in the Avenues area because we did not have money to hire taxis after the show. Sometimes we depended on well-wishers for bus fare. It was a tough situation but we soldiered on,” Tendai recalled.

Despite the challenges they were facing in the industry, their relationship grew into a marriage and they had their first born, Tinaye, in 2007.

Tinaye is also into music and he received a special present of a guitar from the late Mtukudzi a few months before he died.

“We were surprised last week when we went to a prize-giving ceremony at Tinaye’s school. We did not know that he leads a musical group at school. When they were called to perform, we were amazed,” said Selmor.

“We do not allow him to take the guitar he got from Mudhara (Mtukudzi) outside the gate at home because we fear he might lose it, but we saw him playing the same guitar at the school function. We do not know how he smuggled it out. We just laughed about it. We did not ask him because he made us proud with his performance at school.”

Selmor said, before his death, Mtukudzi always wanted his grandchildren around him. He would tell them stories and share jokes. That is when he gave Tinaye the guitar.

“I visited him after he had given Tinaye the guitar and he jokingly asked me: ‘Is Tendai not feeling jealousy because I gave the young man the guitar? Maybe he also wanted a guitar’. We laughed at the joke and when I told Tendai he also laughed his lungs out.

“Mudhara was a changed man in his last days. Although we had differences on various issues, I choose to remember the good things that he did to me and forget the bad side. He was a changed man in the last days. We discussed issues that we never used to discuss in previous years. He also told me some things that he had never said before, which I cannot share with the public.

“But his last statement to me was: ‘Zvedu zvinonoka asi zvinozoita’ (our success takes time, but it will definitely come). He was advising me to continue working hard because success is guaranteed. He also gave Tinaye a word of encouragement when he handed him the guitar.”

It is possible that Tinaye might join his father and mother in studio in the near future. The other children Troy (9) and Hannah (7) have already shown interest in singing. Maybe the whole family will be on the same album one day.

Tendai and Selmor have done a joint album, although they mainly do individual releases.

Selmor has just completed her upcoming album that is set for release on January 31 next year.

“It is a reference to useful and strong remnants. When we slaughter an animal we use the hide for many things and it is one part that lasts longer after the animal is long gone. In a rural set up, an animal’s hide can be used as a mat. It can be used to make traditional drums or even refined into a blanket or something that people can wear. This album allegorically speaks to that aspect.”

Because Mtukudzi was of the elephant totem, Nzou Samanyanga, Selmor says the album represents what has been left after the elephant’s demise.

Ironically, Selmor did not want to discuss anything else about what Mtukudzi left materially.

She tried to avoid the controversy that surrounds Mtukudzi estate after developments that saw his widow, Daisy, inheriting almost everything.

She said the album is evidence of what she inherited from her father and it carries a song dedicated to him.

It has collaborations with South African musician Vusi Mahlasela and Steve Dyer who also produced the album.

For the moment, Tendai is comfortable with taking a back seat and support his wife build her momentum.

“Focus is on her at the moment. I am part of the band and this is our project. I will work on my projects later, but the focus now is to help her maintain the legacy that her father left.

“She has been doing well since we took the Tuku legacy focus,” said Tendai.

So far, Selmor has held Tuku Tribute concerts in the country and has also toured United Kingdom, South Africa and Australia.

She also got a massive endorsement from Impala Car rental that appointed her their brand ambassador and took care of most expenses for recording her album in South Africa.

She was also given a branded Range Rover and has access to many other cars at Impala Car Rental.

Her journey looks promising and, for now, Tendai is comfortable in the passenger seat as his wife drives her career. And they can play Tanga WeKwasando’s “Wake” as they cruise together.

EXCLUSIVE: Sally Hayfron, Just Like Husband Robert Mugabe Left No Valid Will When She Died In 1992